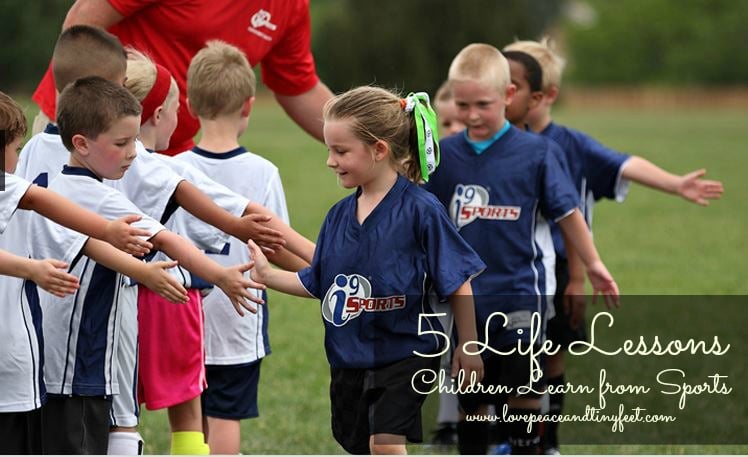 It’s day 4 of NaBloPoMo and today’s writing prompt is: What is the most important lesson you learned as a child and who taught you?

I’ll add a little twist to this prompt and rather than focus on things I’ve learned, I’ll share with you all some of the life lessons my children are learning now through sports.

As you all know, my daughters are participating in their first youth sports program through i9 Sports.  Remember “True Life: I’m a Soccer Mom?”  Well, they are about two thirds into the program (thanks to rain dates) and it has been quite an adventure.  As you recall, it was my oldest daughter (Leila the perfectionist) who had all of these doubts and fears of failure, to the point where she did not want to start the program at all. Well, I am happy to report that she has been excelling!   Is her team winning every time? No. Is she the star player on the team? No.  Is she giving it her absolute all? Yes, and she’s becoming a much better person because of that!

Samara, on the other hand, is a challenge each and every Saturday.  We get up earlier in the morning to take her to practice, sometimes in the cold, and she flakes out on participating until the last 15-20 minutes of each practice!  I haven’t quite been able to figure out what her deal is yet.  Another mom pointed out that it could be the fact that she’s the only girl on the team, but I feel like that would be something she’d tell me if it were bothering her.  Nonetheless, she has gotten a few life lessons herself through this experience.

The best things come to those who hustle.

This is the most important life lesson I was ever taught as well, learned through sports, business, and many more experiences.  What does hustle look like for a child in a youth sports program?  Well, this is what was included in my latest newsletter from i9 Sports and it pretty much sums up what we see in practice:

Some ways you can show hustle are:
Keep trying new skills. Don’t give up when you can’t do it at first.
Practice, practice, practice. Always strive to be your best.
Always pay attention when you are on and off the field or court and be ready.
When it is your turn to come in or out of the game, hurry so you don’t hold up the game.
Play every minute with maximum energy. 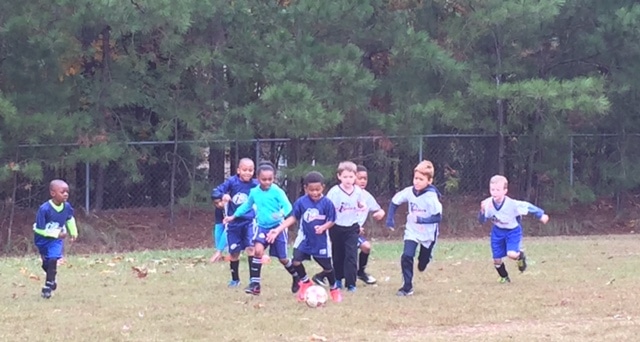 Others depend on you giving your all.

Through the i9 Sports program, teamwork and sportsmanship are among the most important skills they want children to learn.   Players are taught that one of the biggest ways to support your team is by pushing through, playing hard and having fun. They are also taught that when they try their hardest, it makes their teammates want to try their hardest too.

My girls are learn through sports that first and foremost, supporting your team means to be present – physically and mentally.  Physically, we are not late for practice, we don’t leave early for games, we aren’t absent without letting the coach know.  Why? Because the team is counting on us.  Even if it’s just for the simple fact that there needs to be 5 players at a time for game, my girls need to understand that them not being there can mean another player won’t get a break in a game, or the team will be at a disadvantage, or worse, a game could be forfeited altogether.

Mental presence has been a challenge for Leila at times.  She’s been known to get distracted by her friends on the team, her loose tooth, whatever – and I’m that parent on the sidelines yelling, “GET IN THE GAME!”  She now knows exactly what that means.

Sometimes giving your all means you’ll swallow some dirt.

Some of my proudest moments is watching Leila going so hard for the goal, she ends up falling and sliding in the dirt.  Sounds strange, I know, but it shows me that she’s willing to go all in to achieve a goal.  Even if it means she gets dirty or embarrassed or a little bruised, she is understanding what it takes to succeed in life.  I explain to her that sometimes in life, even the most successful people will swallow some dirt. And such is life.

Keep your own score.

As I mentioned in my earlier post, i9 Sports programs are not hyper competitive, as the emphasis is on fair play rather than the score of the game.  That being said, the coaches encourage the players to keep score in other ways.  For example, with each game, they are encouraged to utilize a new skill, to push a little harder, to challenge themselves a little further than they did in the last game.  They learn that with each game, they are competing against themselves and aiming to always do just a little bit better than before.

Mommy doesn’t give up, and neither will they. 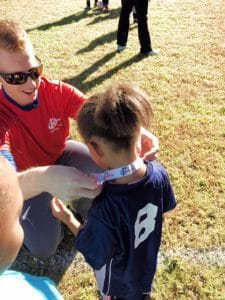 So, you might have gathered from my earlier frustration with Samara, still having to take her to practice every week is slowly becoming the bane of my existence.   Can you imagine how many times I’ve wanted to just withdraw her from the program and gain an extra hour of sleep every Saturday morning?  I mentioned doing just that to one of the coaches early on and his response was clear.  If you do that, she wins.  If I did that, I’d be showing her and her sister that whenever they felt like being less than stellar or non-cooperative, I will fold and give up on them.  Instead, her coaches told me to just stick with it and she’ll eventually come around.  He wasn’t wrong.  We may be at only 20 minutes of play time, but that’s still a good 19 1/2 minutes than we got in the beginning.  Maybe next week we’ll get to 25 minutes and by the time she’s 15, she’ll  make it through a whole game.  🙂

Do you have a child enrolled in a sports program?  Do you have any other life lessons to add to this list?

Disclaimer – I have been provided with a complimentary season of soccer in exchange for my honest (real deal) review of the program. All thoughts and opinions are my own.

Sprinkles are for winners: My thoughts on James Harrison and the "Every Kid Gets a Trophy" rule.
A tale of two kids who wouldn’t sleep in their own beds …
A Safer Night’s Sleep with Brentwood Home, plus Giveaway!
Raising positive and kind kids...one colorful step at a time!

« Rodgers and Hammerstein’s Cinderella at the Fox Theatre this week!
If this doesn’t make you smile… »