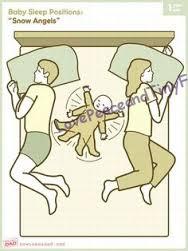 Disclaimer: This post is brought to you at an ungodly hour way way past my bedtime and was inspired by a tiny foot somehow placed on my forehead…

Families who sleep together…don’t sleep at all. Some of you have heard about my seemingly never ending saga with getting my girls to sleep…in their own beds. I swear they really do own those, though you could never tell by the places they actually end up falling asleep in the house – 90% of the time, it’s our bed! Before anyone tries to interject – here’s a little history…

Leila was the first. She was clingy. We were suckers and let her sleep in the bed with us most nights. Then, we pulled out the tough guns and forced her back in her bed at the age of two. That worked for a while until she realized that if she’d sneak back in after we were asleep, we wouldn’t figure it out until a foot hits our face and by that time, well, she’s already won!

Samara came along and we were much more diligent about her sleeping in her own bed from day one. Part of it was out of fear that she could be hurt by her older sister as a baby. Well, that actually worked until she was about 2. She somehow noticed that Leila managed to make it into our rooms and she basically felt slighted. It’s either that or that Leila was waking her up in the middle of the night to come over to mommy and daddy’s bed.

Might I add that they go far beyond co-sleeping, as in simply sharing a bed. Samara’s not happy just sleeping next to me, she needs to be ON TOP of me. As in, my cheek as her pillow. Leila still hasn’t figured out that she needs to at least lay in the same direction as everyone else in the bed.

We’ve all talked about it and genuinely tried to figure out what it would take to get them to sleep in their own beds?” They started out in separate rooms a few years ago, but then decided they “needed” to be together at night. Fine. We moved the toddler bed over to the other room so they could sleep in the same room. Then Samara complained that she didn’t like the toddler bed. Fine. We bought them bunk beds. We put pretty Disney princess sheets on them. They had the coolest room in the house! Wouldn’t you know it…that didn’t do it either.

Then we took to the internet and found a host of really good tips…that worked sometimes. So, in the past year or so, we’ve been putting our foot down, staying up later, and catching them when they sneak out of their beds and shipping them right back. A few times, we’ve been in the living room and they try to come downstairs. We reinforce the rule – go back to your beds! Leila gets the picture on some nights. Samara…well…this is what happens with her:

We’ve found her on the stairs, the hallway, the guest room and living room floors, and who knows what’s to come? Of course, we know we have to check for their safety first (i.e. not letting them fall down the stairs), but am I wrong for just being glad that I can finally get a good night’s sleep and a good memory to laugh at someday???

Encour Creatine Supplements - What busy moms should know!
Matching Easter Dresses and the moments I wish I could have back…
5 things to know about Google Chromecast Audio
5 tips to prepare your guest bathroom for out-of-town guests @Costco #hostinghacks