The Animal Jam Geoz Playset is based on the popular online game, “Animal Jam.” The different playsets are fun collectible sets for pretend play and although I’m discussing the one playset with exclusive Diamond Arctic Wolf, there are other variations of these. The Animal Jam Club Geoz Playset is designed to represent a club scene where Animal Jam figures come together to party on one stage. Club Geoz Playset lets kids envision a party of their favorite Animal Jam pet characters. The set is designed like a club with a dance floor and stage for the DJ. It even has a spinning disco ball and plenty of other features that exude a party-like mood. 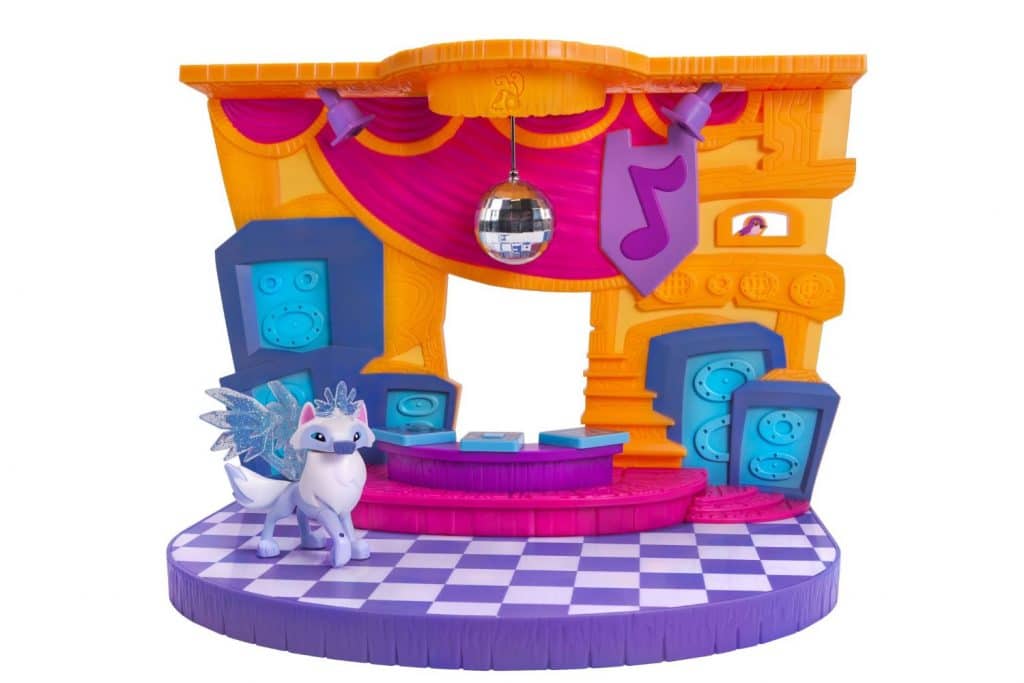 The idea behind this Colorful detailed design: This Animal Jam Playset features an Arctic Wolf figure with accessories. Everything about the wolf from the snow-white fur, and icy blue hoofs, to its adorable eyes, nose, and pink ears is intricately designed. Its head can move around and the wolf wears an Ice Amor themed crown and wings that attach to it via holes. Aside from the animal figure, the stage is also well designed. It is designed as a pink platform with a PA system/woofers and DJ equipment. Music notes printed on the wall, a disco ball hanging overhead and the pink stage curtains adorned with yellow borders create the illusion of a real club scene. The checkered dance floor is spacious enough to accommodate more than one Animal Jam figure. What’s more, the attention grabbing purple, pink, yellow and blue color scheme will surely captivate kids.

Sound and light effects: Pressing the blue button on the table triggers playback of three different melodies. As each song plays, the silver disco ball hanging above starts to rotate and two LED spotlights positioned diagonally will shine on the Animal Jam figures.

Expandable Playset or Collector’s item: Although this play set only comes with an Arctic Wolf, it can be expanded with other Animal Jam figures. Adding more figures creates a real party like scene. The best part is that kids will have more cool accessories to mix and match when choosing the party outfit for their various Animal Jam figures.

• Item can be expanded with other Animal Jam figures

• Playset is easy to assemble and packs easily for storage

• This playset requires two 1.5V AA batteries to operate. Therefore, the batteries will need replacement when they die, otherwise the sound and light effects won’t work.
• The Animal Jam Club Geoz Playset comes with many small parts that are a choking hazard for children under the age of 3.

For parents who want to buy a fun toy that will keep their little ones busy and entertained, the Animal Jam Club Geoz Playset is a good choice. The more Animal Jam Figures there are, the more fun kids have. Expanding the set allows more than one child to play and this item can turn out to be a prized collectible for Animal Jam enthusiasts.