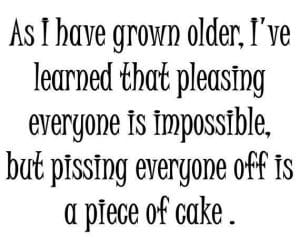 Not too long ago, a pretty respected friend expressed to me what they found to be my greatest “flaw.” The exact words were, “You care too much about what people think of you.”  My response: “What? Who me? I don’t care what anybody thinks of me! No way!” I was super offended by that statement and ready to fire back a few flaws right back at ’em.

I’ve always prided myself on being one of those uber confident, take it or leave it, non-conformist,  “who cares what anybody thinks” kind of person.  It’s what I believe in. It’s what I preach to others.  It’s what I would tell my own children. Why, then, has every aspect of my life been given some sort of a once-over to the effect of…well…”what would so and so think?”  Could it be that I actually do care after all?

If I’m being honest with myself, my “bad-ass” persona is pretty minimal.  Sure, I’m the girl with the piercings, tattoos and (now) red hair, but other than that, I’ve done a lot of things “by the book” and have ruffled only a few feathers.  I say I don’t care what anyone thinks about me, but I’ve never really pushed the limit enough to test that theory.  I went to college, got married, had children – in that “appropriate” order.  House in the suburbs, kids at a good school, professional career, etc.  While granted through my blogs, there’s far more information about me floating in cyber space than some would consider normal, I guarantee you’ll never be able to Google anything just that juicy on me.  Really, this “bad-ass” is pretty damn good.

A big, huge, part of that is my West African background.  There’s always been this awful stigma surrounding that person who “brings shame” to the family.  There are essentially two categories of family members – the ones who make the family proud and the ones who disgrace.  The disgraceful ones bear labels like the whore, the gay,  the rogue, etc. The latter group doesn’t come around much, but will find their names present in virtually every family conversation. Nobody wants to be that person, nor chooses to be. It usually just ends up happening after getting caught for some indiscretion. It’s a terrible thing.

But what has become blurry is just how far can you go before hitting the wall of shame in the family? And at what point do you learn to cut off family members who really don’t count.  For example, in the course of my marriage, I have seriously considered divorce.  I shared this with my mother (who is divorced, by the way) and her response to me was, “Oh, no. What will people think if you go and leave your husband?”  She was referencing the idea of both she and I being divorced and the thought of it being some sort of curse (for lack of a better word) of the women in our family.  Still though, that is hardly the “work on your marriage” speech I was expecting and I surely expressed my thoughts on that.  First of all, who are these marriage gurus we were so eager to prove something to?  Distant family friends who, at the end of the day, have absolutely no say so in any of our lives?

So, now that I’m coming to terms with the idea that my friend was right and I care too much about what people think about me…what’s next? Do I sign up for some crazy reality show and become Bravos next bad B*?  Do I go on a confession spree and blog about all of my deepest darkest secrets (as well as others’)?  How do I just automatically turn off that “caring” switch and show the world that I really can be that total rebel I aspired to?

Time Magazine: Define "Mom Enough" (Warning: Breastfeeding Debate)
Tantrums and Tune Outs: Grad School Week One
Mommy and Me time
How my self-diagnosis brought my "self" back!

« What is Birthday Week?
Making time for your home business while raising young kids »