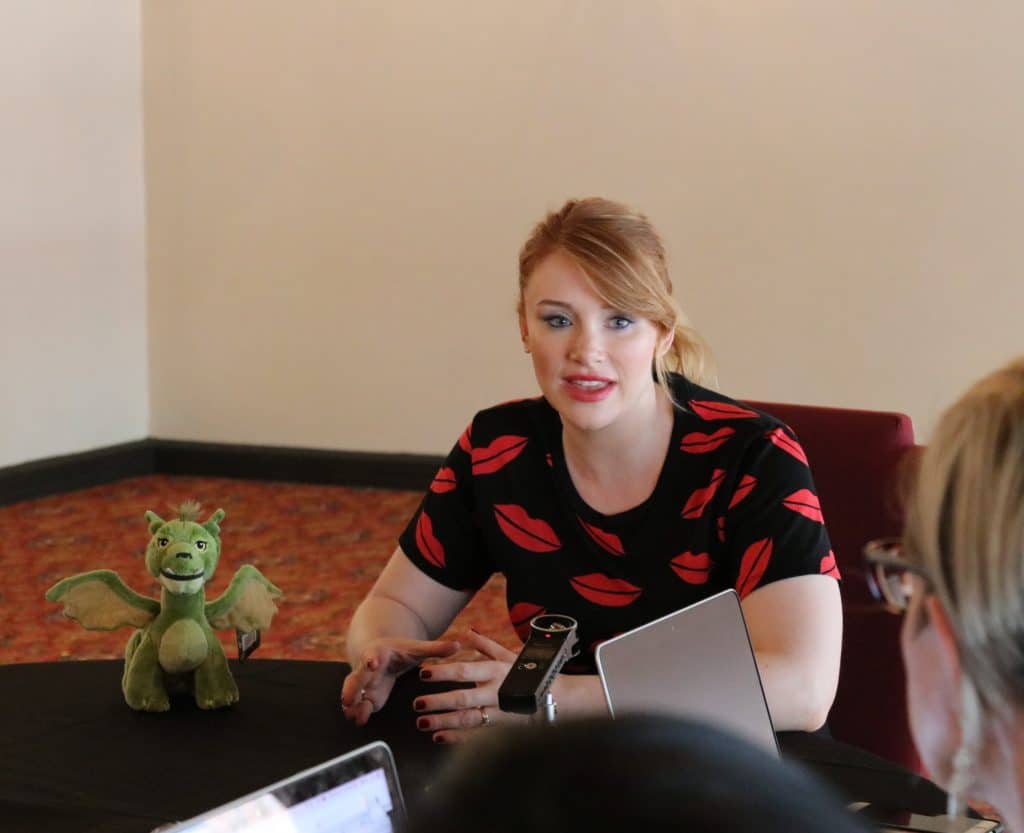 Bryce Dallas Howard is even more awesome in person than she is on screen! I tweeted that out a couple of days ago in excitement after I had a chance to meet and interview her and I meant every word! She entered the room very spirited and bubbly and so warmly welcomed all of us. She’s a mom too and mentioned the fact that she actually does read some mom blogs to help her through some of her parenting decisions. How cool is that?!

For those of you who aren’t familiar with Bryce Dallas Howard, despite being the daughter of the acclaimed Ron Howard, she has had an impressive acting career all her own– with popular titles such as Jurassic World and The Help under her belt. Now, as she takes on the role of Natalie in Disney’s Pete’s Dragon, she brings a whole new excitement and energy to this role.

We sat with her the other day and she shared with us some of her thoughts on what makes this role particularly special to her and the things she’s learned from Disney’s Pete’s Dragon:

“Disney movies are 50% entertainment and 50% therapy.”

I’d never quite thought of it that way, but I can totally agree with this. I remember years ago when my daughter first saw the movie The Lion King. When Simba’s dad died, my daughter turned to me and asked, “What’s wrong with Simba’s dad? Is he sleeping?” I told her he was sleeping, but my mother-in-law quickly asserted, “No, Leila, he’s dead!” As mortified as I was introducing this notion to my 2-year old, I have to admit that she’s since had a very healthy perspective on otherwise sad topics.

So while Bryce joked about how a parent seems to die in almost every movie, she also shared one of my new favorite quotes from Walt Disney himself, “Life is comprised of light and shadows.” We can all appreciate the fact Disney movies truly don’t shy away from those shadows and in turn become very powerful for us both as children and as parents. 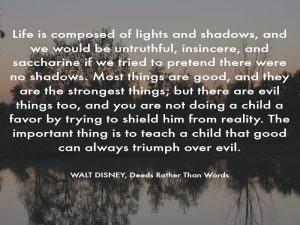 With that, Bryce shared with us the one most powerful takeaway she hopes people will see in the movie surrounding the notion of family and, particularly, showing what it takes to find or create your family. You think of the character, Pete, who lost his parents at such a young age and later learns that there is a family there for him. You can also think of so many young boys and girls who yearn to fill the void of a missing family member and the comfort he or she might find in believing there is a family there for him or her as well.

“Stories are meant to prepare you for the commonalities of the human experience…and in the midst of that, having bonds that are seeming impossible or unconventional… Telling stories that integrate the imaginary world with the same real world allows us to transcend the daily grind of reality and reminds us to look for magic.”

As she utters these words, you could feel the entire room pause, take note, and silently cosign to this exact thought. On the surface, you’re thinking you’re seeing a movie about a little boy and his imaginary friend. It’s not so simple, however. The imaginary friend turns out to be a seemingly terrifying dragon (Elliot), who turns out to be not only Pete’s friend, but his number one protector. What’s more is that you see how just as much Pete and Elliot actually need each other. And the bond is so strong and magical, you sort of find yourself wishing for (or recognizing) that same magic in your own world.

Of course, our interview with Bryce Dallas Howard also had some extremely comical moments. Like, she shared with us one of her funniest memories as a kid when she’d try to become The Little Mermaid by tying up her legs and jumping into the pool! Yes, that had us all both dying laughing and completely mortified as parents.

Favorite Disney Movie: You guessed it…The Little Mermaid
Favorite Question to Be Asked By Young Fans: “What was it like working with Elliot”
Favorite Scene in Making Pete’s Dragon: Getting to actually ride the dragon.
Fun Fact She Knows About Robert Redford: He’s never dyed his hair!

In all honesty, Bryce Dallas Howard was truly a delight to meet and super talented in every project she takes on. You can see her starting today in Disney’s Pete’s Dragon in theaters everywhere and I’m sure there’s much more to come from her in the future!

Meet the bright young stars from Pete’s Dragon – Oakes Fegley and Oona Laurence Interview #PetesDrag...
Why Parents and Kids Will Love Disney Junior's Vampirina with Producer Chris Nee
"A Straight Up War On Women!" My Review of the New ABC Sitcom "American Housewife"
Storm Reid Cast as Meg Murry in Disney's A Wrinkle In Time!!