During my trip earlier this year to Pixar Studios and Sonoma Raceway, I had a chance to sit in on an early press conference with Cars 3 Director Brian Fee and Producers Andrea Warren and Kevin Reher. They shared some of the behind the scenes info for developing the film as well as some stories they had while working with the cast. Here are some highlights from our interview: 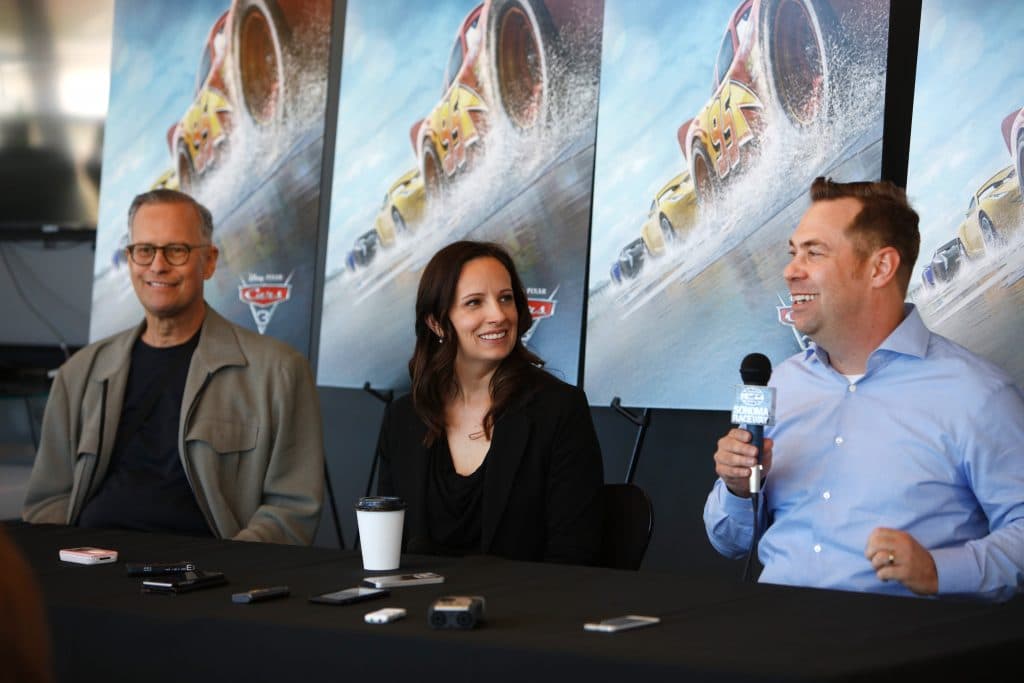 On what makes Cars 3 different from the previous Cars movies

Our hope is that everybody knows what it’s like to not feel like you belong. And, and of course you know, we’re just looking for humor whenever we can do it. So we’ve got more racing in this movie I think than we’ve ever had in any, any Cars movie.

On developing the story of Cars 3

Brian Fee: As with Lightning, or Woody (Toy Story) or any of our characters when you get into you a sequel, into the 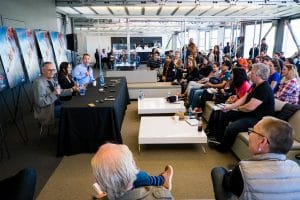 third movie where they have, they have learned a lot of lessons.  It, it’s hard to find, you, you have a very movie if your main character does not have actual problems to deal with.  So one of the things we allow is for our characters to be imperfect ’cause that’s where we find stories.

With McQueen, it just took a little research, we started talking to Jeff Gordon, we started to talking to other athletes and we started seeing people who were at the top of the game who were big celebrities, who had it all and, and they’re facing the expiration date that all athletes have.  And quite frankly, we also felt like we feel that way.  We felt like as an artist,  new artists, young artists, interns come into the studio and they can draw better than I can now, let alone when I was their age.

So, I think all of us, I think everybody in the world probably has that feeling that they know what it’s like for someone younger to come in – the next generation – and you can start to feel like you are no longer valid anymore.  So, it seemed like an honest thing to latch onto.

We also put a lot of time playing with everything that Storm says is almost nice, at least when you first meet him – where you’re not sure if {something} sounded like a compliment. He just kind of has that subtlety, that nuance that we’re looking for with him.

On working with the cast of Cars 3

Brian Fee: Oh yeah, it was a pleasure.  Before we get the real actors involved we do scratch acting, just folks around the studio as we’re trying to craft a story and, and experiment with a story, try things.  So, we’ll just grab somebody to say the lines.  Then we get Owen in the booth and now it’s actually McQueen.  Right, McQueen is saying those lines, it’s really great working {with Owen}, he’s very collaborative. One of my fondest memories with Owen is him looking at the lines and stopping and saying, ‘This doesn’t make any sense to me.  I’m not so sure this would {happen}.  Wouldn’t, wouldn’t the character do this?’  And he, and he, and he’s not talking about just something he wants to say. He’s also a writer, so he wears his writers hat when he’s in the booth.  And actually, we’ll talk about a scene and he’ll start giving me new options and we’ll play around.  And you know, often what ends up on the screen is something that wasn’t necessarily on the page that we started with.  And to me, that’s, that’s exhilarating. It’s as close to improv as you can get in the animation world.

And he’s recorded for us, many, many versions of this movie that are not on the screen.  Right, so, we bring the actors in fairly early as part of the experimentation process so finding out story.

Andrea Warren:  Yeah, we get him in there, not because he didn’t nail the acting on the last time. It’s just that we’re rewriting and changing things and so we have to keep going back with line changes and that sort of thing.

Kevin Reher:    We always say the movies aren’t done, they just come out.

Q: What did Nathan Fillion and Kerry Washington bring to these characters?

Brian Fee:    Nathan’s very charming and he kind of charmed me the moment that he walks in the room.  He sits you down and he starts smiling at you, you’re like, ‘yeah, you’re the right guy.’  He is a pleasure to talk with and one of those guys that every take – he’ll give you seven takes- they’re all perfect. They’re all different, but they’re all perfect.  So, whichever one you use, you left six great takes on the floor that you can’t use.

Kerry was… (Brian paused for a moment and continued). I’ll tell this story.

So she’s never done animation before.  She comes in for her very first recording session, and she drove herself.  She’s running a little late and apologized because traffic was bad.

She apologizes to us again for not having memorized her lines, (which he tells us is not something that is required for animation).  That was just very sweet. Then, she steps in front of the microphone and starts throwing out all the lines as if she’s a veteran.  There’s a certain way we work in animation. It’s a little different and she kind of instinctively had it down.

I don’t tend to look at the actors while they’re delivering their lines.  There was one part where Kerry was delivering something kind of intensely and I was just looking down, listening for the intensity. Then I couldn’t help myself, my eyes went up and I caught her right in the middle of her line.  And…she was giving…she was playing to me, and she was just giving me the eye daggers.  And I actually felt her eye daggers going through my head.  And I {thought}, ‘yup, there it is.’  Yeah, she was wonderful.

On the overall message of Cars 3

Brian Fee:    The real message of the movie for me is buried in McQueen’s story.  And it is finding purpose in life. That changes throughout your life, what is important to you when you’re twenty is no longer probably necessarily what’s important when you’re forty five.  And we go through these changes where life does have new meaning and that’s the discovery he’s on.

On the future of the Cars franchise

Q: How long do you think the Cars franchise will last?

Fee: We’ll have to wait and see. As John Lassiter says, we won’t make a story unless it’s worth telling.

I personally would love to see what the future of this Cars franchise holds, but in the meantime, you guys can all check out Cars 3 when it comes to theaters on June 16th!  Check out the official trailer below!

A Night with the Marvel Stars at the Avengers: Infinity War Red Carpet Premiere in Hollywood
What to expect from Season 6 of ABC's #OnceUponaTime.
What parents can expect from Disney Junior's Fancy Nancy series
Captain Marvel on Blu-Ray: Bonus Features and Exclusives

« Introducing the all new JUSTICE LEAGUE: Battle for Metropolis ride at Six Flags Over Georgia
The Seven Chakras: What the Chakra Centers Mean for Your Health »