Earlier this year, I had a chance to attend the early press dates for the movie Cars 3 and learned a ton about the making of the film, the history of racing, Pixar’s Production Pipeline, and more from Director Brian Fee and Producers Andrea Warren and Kevin Reher. 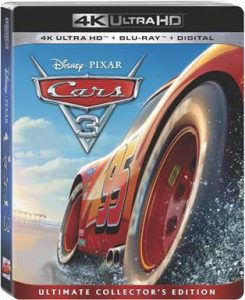 Cars 3 is now on Blu Ray and in addition to the action packed film we all loved, viewers can also enjoy several fun bonus extras – some of which give you a glimpse of what I experienced in getting a behind the scenes look along with the filmmakers and story team of the film.  You’ll see how the real world race training influenced the filmakers, follow along Cristela Alonzo’s journey to making the character of Cruz what she was, some of the ultra cool scenes that just didn’t make the final cut into the movie, and more.

One bonus feature that’s so near and dear to me is the inclusion of the short film, LOU. If you saw this in theaters, you remember the cute little short about the kids in the playground and lost and found box that preceded the film. I was such a heartwarming clip and I’m glad it has also been included in the BluRay version.

Lastly, Miss Fritters Racing Skool is a super fun mini-movie only available on BluRay. If you remember her from the film, you’ll understand why we just needed a little more of her!

But… before you watch Cars 3 on BluRay, here are some really fun facts to check out that might get you looking at the movie just a little bit differently…

ROAD TO VICTORY — When faced with a new generation of racers who threaten to derail his career, Lightning McQueen (voice of Owen Wilson) teams up with tech-savvy, unconventional trainer Cruz Ramirez (voice of Cristela Alonzo) to find his way back to the top. ©2017 Disney•Pixar. All Rights Reserved.

"A Straight Up War On Women!" My Review of the New ABC Sitcom "American Housewife"
Chat with Bernard Davis Jones and Marcel Spears of ABC's #TheMayor #ThorRagnarokEvent #ABCTVEvent
Why the movie Dog Days is not just for dog-lovers
Karl Urban on The Evolution of Skurge | Thor: Ragnarok