In the beginning of the Cars series, we found a young Lightning McQueen enter the racing scene and take it by storm. As I shared with you guys the other day, Cars 3 takes place just as McQueen is reaching a crucial point in his racing career where he is potentially aging out of the field and joining the legends from before his time. With this scenario, Cars 3 presents the next generation. 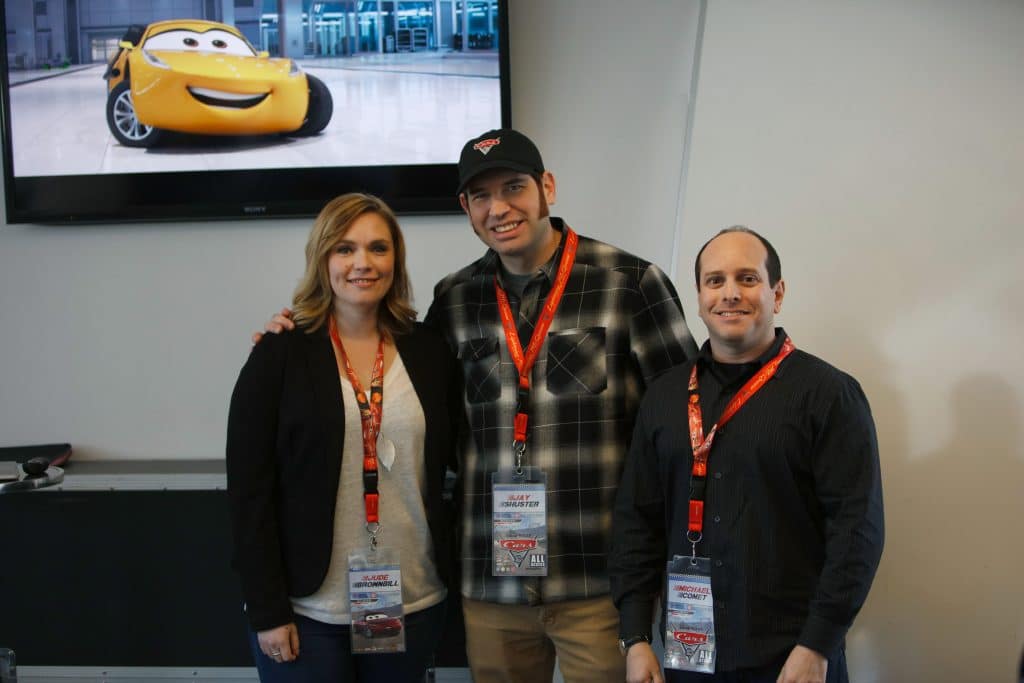 I gave you guys a glimpse into the story behind the Cars 3 story as shared by the film writers, but we also had a chance to sit with Production Designer Jay Shuster,Characters Supervisor Michael Comet and Directing Animator Jude Brownbill to learn more about the interactive design process that went into creating these characters. Additionally, Supervising Animator Bobby Podesta,Supervising Technical Director Michael Fong & Effects Supervisor Reisch gave us more insight into the Pixar Production Pipeline.

For each of the characters, the team created hundreds of sketches, plastering the walls with imagery, keeping in 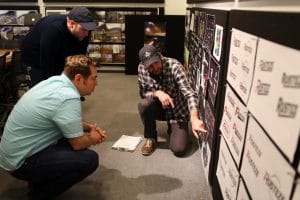 mind that they were creating characters first, cars second. They had to pay attention to bringing these characters and their personalities to life. Among the first things they did was to take a look at the graphic design of NASCAR these days for inspiration on how to give McQueen a rival that completely defines the next generation of racecars. They’d later exploit paint, shape and graphic to yield a character that needs very few words to express his actions. This part of the process is ultimately why a character like Storm contains an aggressive shape, super low profile and is more angular and sharp than the round, classic, upright McQueen

One cool thing I learned was that they begin their work in clay. Starting with the clay sculpt, they continue to take photos of those and overlaying sketches on top of that to push the design forward.

Of course, past the clay stage, they began creating the characters on the computer. This is where they could go into the intricate details of the painting, shading and shaping of the characters. They had to pay attention to the relationships between the eyes and mouth, as well angles of the windshield to ensure that it doesn’t appear as though the eyes are staring into space. Things like reflection came into play quite a bit and we learned that in
some cases, they had to animate cars that were offscreen just because you could see them in the reflection, because these cars are so shiny.

Additionally, this is the part of the process where they add the intricate details such as license plate, logo, details of the headlights, decals, etc.

After they shade and remodel the character, they have to set them up to be animated. They put the cars through various poses and had to set up every single thing that can be moved with the character – opening the jaw, moving the lip, moving the corners of the mouth, eyelids, eyebrows, etc. According to Comet, “It’s helping create a virtual puppet. There are controls in it for the face, the body, the wheels.”

“We knew that the story for Cars 3 was very emotionally grounded and then we were seeing these renders coming out that were very visually grounded. We knew that our animation had to live in incredible detail in the world that we created… For us in animation terms, that meant maybe pulling back a bit from big broad cartoony movements. And instead having these several thousand pound cars feel and move like they should. Respecting their weight. Respecting physics. Truth to materials.”
-Jude Brownbill (Directing Animator)

After taking into account the successes and challenges from the previous movies, Brownbill shared that her next challenge was creating this new generation of Cars 3 characters, each of whom are different from each other and rely on animation to support the uniqueness of each character. This is done by carefully crafting the way they look, move and behave.

Here’s how the animation shaped the next generation: 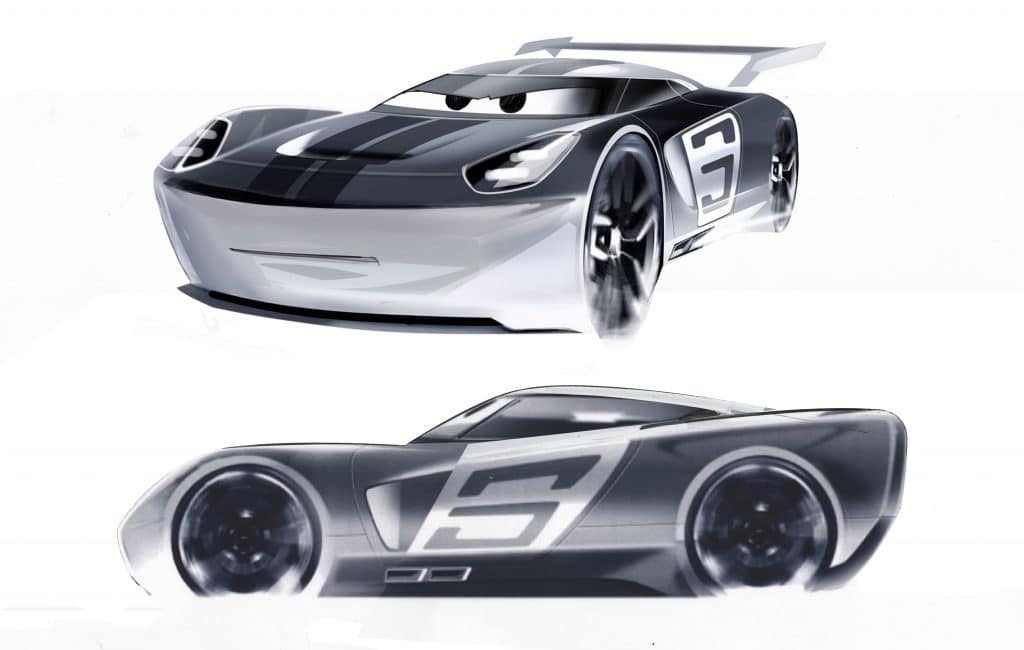 “Storm’s very angular and sharp. So it’s up to animation to take those controls and support the design of the car and the body. So for Storm, we took that angular and sharp design and tried to do just that. Created straight lines, sharp corners of the mouth. We even asked for extra controls so that we could make the top of his lip even sharper and more angular. And then we continued to reflect that with his eyelids. Same with the way he moves. He’s lower to the ground, tighter suspension. He doesn’t lean into his turns the way McQueen does. He’s very strategic in the way he drives. It almost looks effortless.

He’s very overconfident and arrogant. He only really cares about himself and winning. Minimal body movement and over articulation of the mouth helped get that across. If we contrasted what his eyes were saying with what his mouth was saying, he would really come across as that type of character you’re not really sure if you should like or not. His eyes would be telling his true feeling. We tried to push that a lot.” 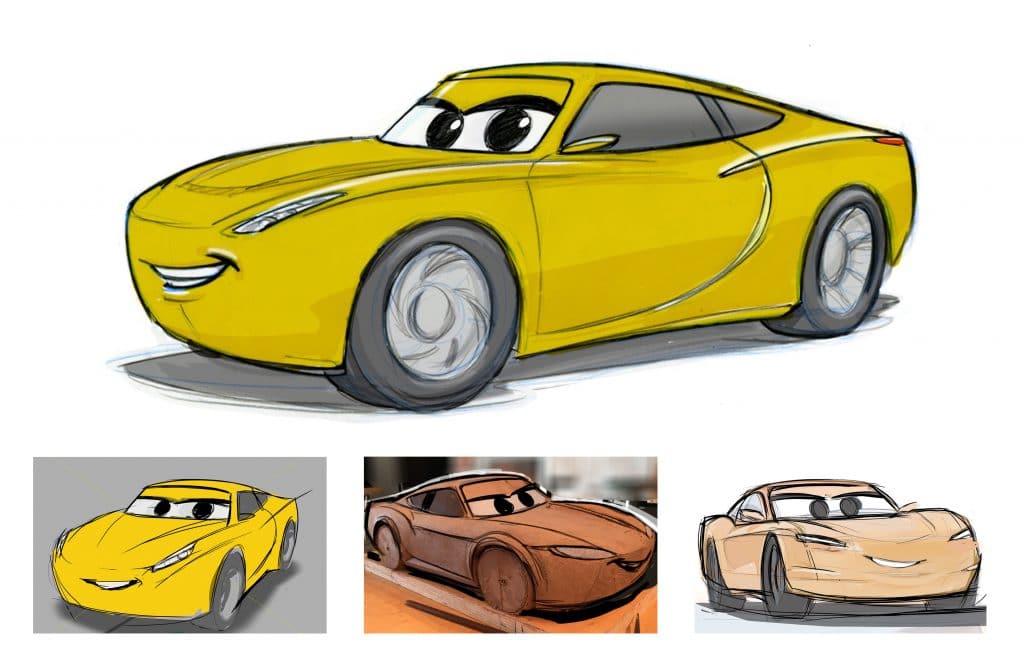 “Designed to be based in American Muscle Car yet informed by more European sports car stylings. She’s not a race car yet she’s a strong female character who has to meet the next generation race car at their level. Her design lies between McQueen and Storm. We wanted to echo the curves of the design. Experimented putting that into her mouth.

Cruz is a powerful trainer and she’s full of enthusiasm and energy but she doesn’t really know how to harness that power. She’s very out of control in the real world. Cruz is really based on Cristela Alonzo – smart, determined, funny, from modest beginnings. Just as the story artists had done figuring out who Cruz was (based on Cristela), we went to the source. We watched a lot of her standup, her TV show. We tried to pull inspiration where we could from facial expressions, comic timing, etc. We kind of immersed ourselves in that. We found we could be a lot broader with her body movement because she has such a big personality.”

The animators and story artist come up with ideas and clips that they are ultimately able to string together and build upon to create the final scenes and the finished film during the production pipeline.

One remarkable scene in Cars 3 is the demolition derby McQueen and Cruz visit. There’s tremendous interaction between multiple character and the surrounding elements of the scene. And the team does an amazing job of creating just the effects you need to feel a part of the story – from engine smoke, to tire peel outs, to skid marks, water and more.

They used physical simulator effects software, laws of motion and physics to create such elements as the velocity of the cars, how fast the wheels are spinning, traction, and air flow around the cars to give you a sense of reality with the cars going around the track.

One interesting fact we learned was the fact that it was actually the mud from the scene that created the biggest challenge. The true to life texture of mud made it difficult to recreate through animation, so a team effort was necessary.  Finally, it took 160 shots with about a half dozen departments to create the final scene.

The heart of the story

“At the core of all of this isn’t about being visually tangible, but also emotionally tangible. Something that you can connect to. The story of a bunch of lamps isn’t just a bunch of lamps, it could be a family. Whether you’re watching a lamp, a fish or a car, Pixar wants you to get down to it and say, “wow I know that person!” Everything in Cars 3 stems from this same view point. “
Bobby Podesta– Supervising Animator

From the start of Pixar with 1986 with John Lassiter, the goal of each film is to take something tangible and make it into an art form. Just as you can almost smell the salt in the air during Finding Dory, their goal for Cars 3 is for the audience to feel just as McQueen does – out of his element, but ultimately triumphant.

…And I think they’ve succeeded!

Cars 3 comes to theaters on 6/16. Check out the trailer below:

Experience Disney’s Moana this week in Dolby Cinema at AMC!
13 Little Known Facts About Black Panther
Watching Descendants 3 while still mourning the loss of Cameron Boyce
Where to find all of your favorite Black Panther products and toys!

« 5 Things to Look For When Buying a New Mattress #ShopUPF
Introducing the all new JUSTICE LEAGUE: Battle for Metropolis ride at Six Flags Over Georgia »