This past weekend, we joined members of the cast of Dog Days at the Official Press Conference in Beverly Hills.  It was just after we’d seen the film for the first time and we were so excited to hear their reactions to the film, as well as to answer some of the big, burning questions submitted by numerous fans.

In attendance at the Press Conference, we had Nina Dobrev, Director Ken Marino (who face you’ll also see in the film), Eva Longoria, Vanessa Hudgens, Adam Pally and Tone Bell. The group had an amazing chemistry together and there was no doubt in our minds that laughs shared off-screen were just as much as audiences will enjoy seeing the movie.

Now, it’s no secret that this all-star cast has loads of truly dedicated fans and our Twitter DMs were filled with questions for the cast and we got to as many as we could.  Luckily, we did get some of the biggest fan questions answered…

All About Maverick Dobrev (IG: @MrsMaverick)

Fans everywhere wanted to know all about Maverick, Nina Dobrev’s adopted half Border Collie half Aussie Shepherd.  Nina confirmed during the press conference that while Maverick did get to star in the movie, as the dogs were actually cast before the actors,  she did sneak in an extra role in the film. 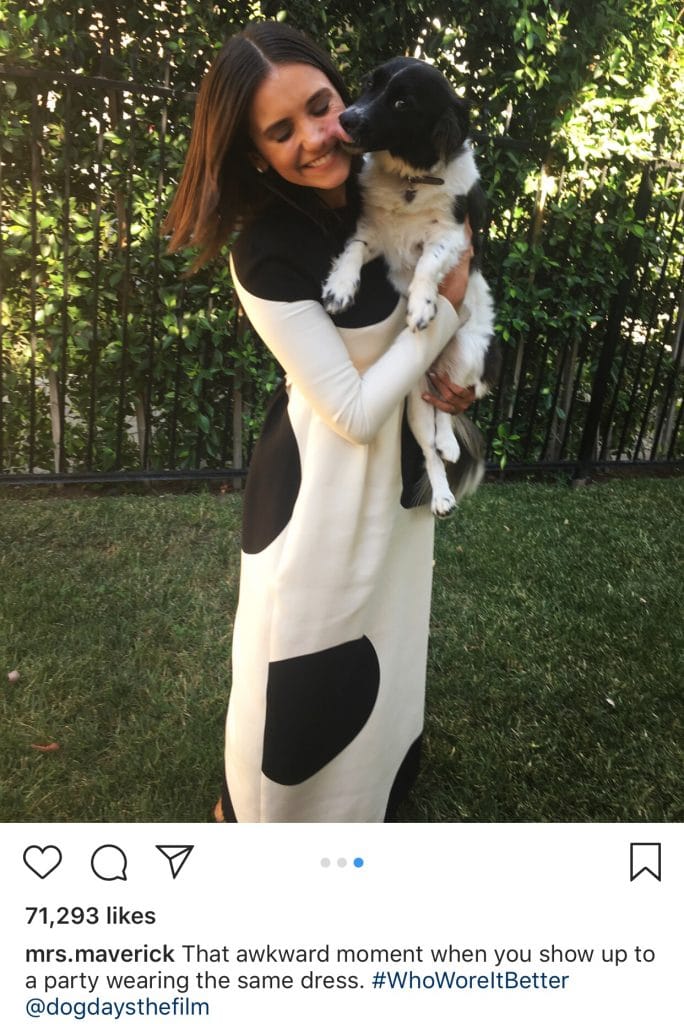 Dogs in the cast made them Dog Lovers

Tone Bell in particular noted that he fell in love with some furry friends from the film.  “Maverick is like my niece now” he shared, which is a pretty expected pairing considering his and Nina’s relationship in the movie.  Tone’s role in Dog Days is a new co-anchor and former NFL star “Jimmy Johnston,” who ultimately becomes an unlikely love interest of Elizabeth (played by Nina Dobrev).

Also not surprising, Ken Marino shared that he has always been a die hard dog lover. This is evident in this movie that truly brings a lot of heart to the and light to the unbreakable bond between people and their pets.

Misadventures with the dogs in the movie? 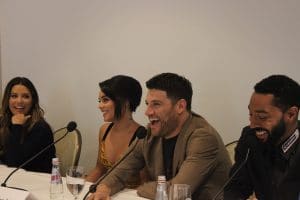 We learned that each of the dogs in the film got along great, with surprisingly very few mishaps behind the scenes.  One pretty funny story shared, however, was how the dog who played Charlie would get particularly “excited” around Adam and let’s just say…loved to show affection.  hahaha.

Nina Dobrev plays a newly single character in the movie who struggles to find love again.  She shared with us the fact that she’d been a cat lady for 18 years before the passing of her cat, whose death left her feeling pretty alone.  In this case, her dog Maverick was her saving grace and helped her get through that rough period in her life.

“I was a cat lady for 18 years. I got her when I was 9, and she passed away when I was 27. It was the first time  I had ever truly been alone. Then I also realized how co-dependent I was and that I needed a furry friend to get through my days.  I’ve always loved dogs, but because of my cat couldn’t get a dog. I started following all the rescue shelters on Instagram. I was at Coachella scrolling through my feed when Maverick popped up – her and her brother. I went immediately. I knew Maverick was the name, but I fell in love with her and [even thought she was a girl] that didn’t change my prospective.”

Likewise, Vanessa Hudgens shared that she also found herself relating to her character in Dog Days.  Vanessa plays a young, spunky barista, trying to find herself and purpose beyond the coffee shop.

“When I woke up at 27, I felt like I had no idea who I was and what I was doing with my life. That’s kind of where you meet Tara. I think that we, in a sense, are all looking for our greater purpose.”

How Eva Longoria became part of the cast of Dog Days

Eva Longoria’s storyline in Dog Days is one of the most heartwarming. She’s not the most comedic among the cast (at least, not in the film), but as we know from her other roles, she’s no stranger to bringing the comedy to otherwise dramatic roles.  We learned that after working on another pilot with Ken Marino, she specifically requested that he put her in this movie.  Actually, her exact words were that she blackmailed him by threatening to tweet out some pictures.  She shared that her respect for Ken Marino was among the main reasons she wanted to the cast of Dog Days. She added,

“It is so great to have an actor/director because they speak your language. There are so many directors that can’t articulate what they want. I love Ken’s kind of funny; he’s my kind of funny. I knew I would be in good hands. ”

Vanessa Hudgens on working with dogs 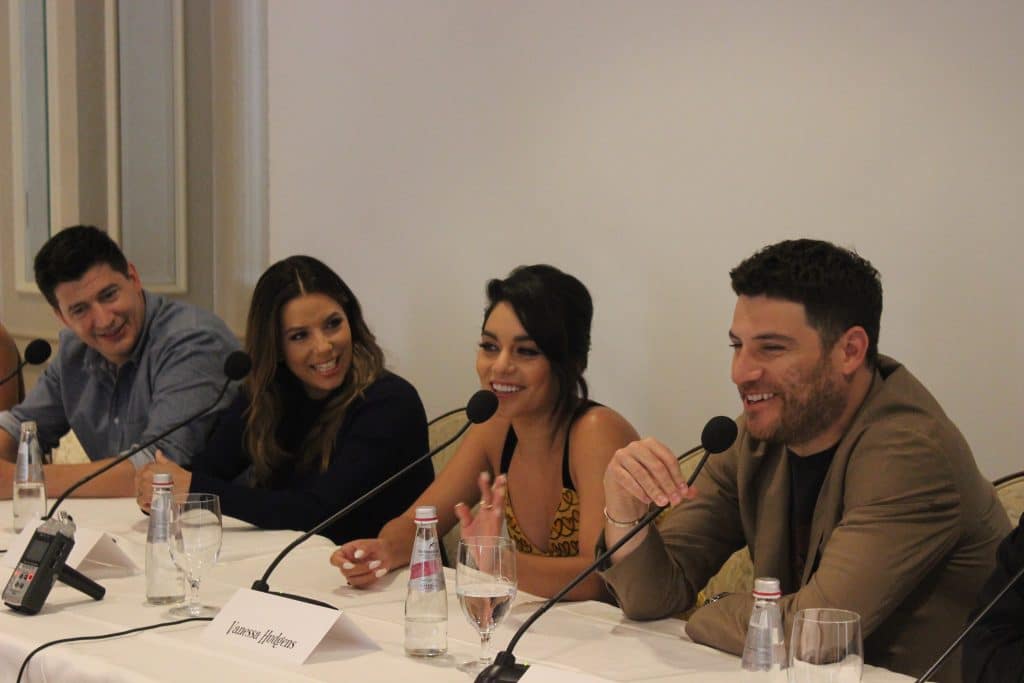 Last, but certainly not least, Vanessa Hudgens fans wanted to know what the hardest part was for her working with dogs during the filming of Dog Days.  Her answer… ““Not being distracted and wanting to cuddle them all day.”  She shared that she would sneak away in between sets to play with the dogs.

Be sure to check out LD Entertainment’s Dog Days…Now in theaters! Check out my Dog Days Review here!

Chris Harrison dishes on the Bachelor Winter Games and more Bachelor secrets
Paul Rudd tells us who the "Real Cassie" is in his life and melts our hearts
Real life inspirations behind Queen Of Katwe-Phiona Mutesi & Robert Katende
Karl Urban on The Evolution of Skurge | Thor: Ragnarok