This post is sponsored by Best Buy.  As always, all opinions are mine alone.

We’ve enjoyed Toy Story 1-3 over the years, but the anticipation for Toy Story 4 is more than apparent in my home! “Toy Story” was originally released on Nov. 22, 1995 and was the first fully computer animated feature film and the highest grossing movie of the year. It was nominated for three Oscars® and two Golden Globes®. “Toy Story 2” is the first film ever to be entirely created, mastered and exhibited digitally. “Toy Story 3” was released in 2010 and also won Oscars® for best animated feature film and best achievement in music written for motion pictures, original song (Randy Newman/“We Belong Together”). 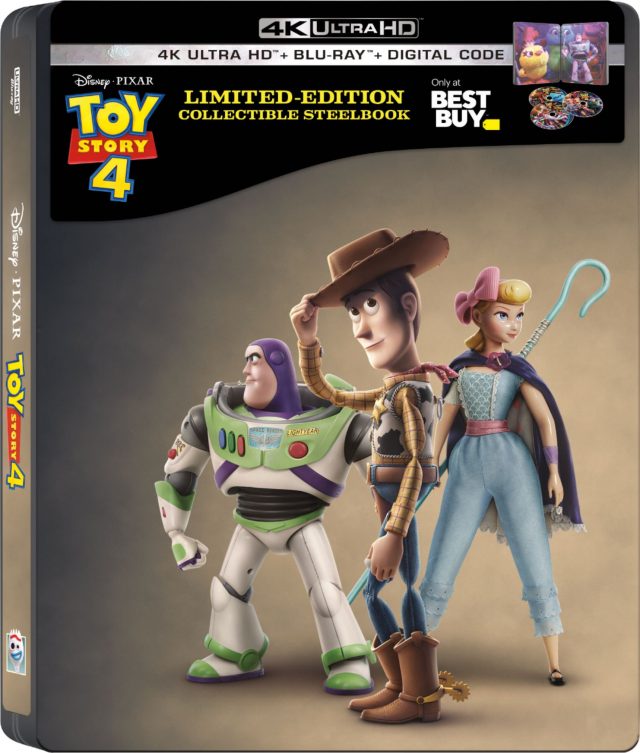 The great news is that you can see “Toy Story 4” in theaters now and also bring some of the magic home from Best Buy. The adorable Steelbook, with exclusive art for Toy Story 1, 2, 3, and 4 is now available and is a collectible to treasure for years to come. Plus, Best Buy has expanded their toy selection over the last year and has toys for the most popular movies of the year, including toys for Toy Story 4!

So just who are the toys –old and new- that hit the road in “Toy Story 4?”

WOODY is the same pull-string cowboy sheriff that we all fell in love with years ago. But, despite the fact that he’s found a new home with Bonnie and her toys, Woody is quietly struggling. “He’s basically going through the toy equivalent of empty-nest syndrome,” says screenwriter Andrew Stanton. “It’s not that he doesn’t have a kid, but his role has completely changed. Woody’s trying to use his old ways of solving new problems.” According to producer Mark Nielsen, change is on the horizon. “Woody has gone through so much in the first three movies. We’ve seen him evolve and learn, but we couldn’t repeat any of those lessons because he’s already learned them. We wanted him to face something new.”

BUZZ LIGHTYEAR is loyal not only to his owner, but to the friends he’s made along the way—especially his once-rival Woody who’s like a brother to the ace Space Ranger these days. Buzz would do anything to support his pull-string buddy, but when his efforts land him in a carnival game booth as an inadvertent prize, he turns to his inner 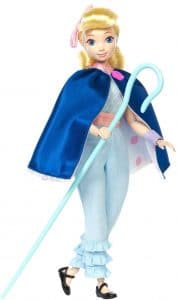 BO PEEP is a long-lost friend of Woody, Buzz and the gang, who always shared a special connection with Woody while residing with her sheep on a lamp base at Andy’s house. After being on the road for years, Bo has become chipped and weathered, but her spirit is far from broken. She has grown into an adventure-seeking free spirit whose strength and sarcasm belie her delicate porcelain exterior. When she and Woody are reunited under unlikely circumstances, Bo realizes just how much she’s missed him, and can’t wait to show him what she’s been up to.

FORKY is not a toy! At least that’s what he thinks. An actual spork-turned-craft-project, Forky is pretty sure that he doesn’t belong in Bonnie’s room. Unfortunately, every time he tries to get away, someone yanks him back into an adventure he’d rather skip. “The world of ‘Toy Story’ is built upon the idea that everything in the world has a purpose,” says Cooley. “A toy’s purpose is to be there for its child. But what about toys that are made out of other objects? Forky is a toy that Bonnie made out of a disposable spork, so he’s facing a crisis. He wants to fulfill his purpose as a spork, but now has a new toy purpose thrust upon him.”

Forky was “born” in the story room during a casual discussion in which filmmakers wondered what qualifies as a toy. “We were joking around,” says Cooley, “wondering what would happen if we had a toy that was not manufactured. Would it be alive? Those weird existential questions about the ‘Toy Story’ universe are really fun. If a child plays with you, are you a toy?”

DUCKY and BUNNY are carnival prizes who are eager to be won. But when their plans are rudely interrupted, they find themselves on an unexpected adventure with a group of toys who have no idea what it feels like to be tacked to a prize wall.

Among the new faces is GABBY GABBY, an adorable, talking pull-string doll from the 1950s. But unfortunately for her, a manufacturing defect in her pull-string voice box has left her sounding anything but adorable. She has spent more than 60 years forgotten in the depths of a jam-packed antique store—her only companions are a band of voiceless ventriloquist dummies. Gabby Gabby knows someone will want her if only she can find a working voice box to repair hers.

DUKE CABOOM is a 1970s toy based on Canada’s greatest stuntman. Riding his powerful Caboom stunt-cycle, Duke is always prepared to show off his stunt poses with confidence and swagger. However, Woody learns quickly that Duke has an Achilles heel: He has never been able to do the awesome stunts advertised in his own toy commercial. For years, Duke has been sitting in an antique store, constantly reliving the failures of his tragic past.

GIGGLE MCDIMPLES is a miniature plastic doll from the 1980s Giggle McDimples toy line. Giggle is Bo Peep’s best friend. Small enough to perch on Bo’s shoulder, Giggle is Bo’s confidant, supporter and advisor. “Giggle is Bo’s Jiminy Cricket—we’re able to get insight on Bo through their relationship together,” says Cooley. “Giggle is definitely the smallest toy in the Toy Story universe. She’s been stepped on, vacuumed up, and probably put up a kid’s nose in her time.”

BENSON is a classic, antique ventriloquist dummy, and Gabby Gabby’s right hand. He leads a small group of ventriloquist dummies that serve as Gabby’s henchmen. With no person to give them a voice, these silent toys patrol the antique store with a looming quietness. A quietness that is inherently unsettling.

“The dummies are, by far, some of the creepiest characters we’ve ever created,” says producer Mark Nielsen. “Our animators really leaned into the truth in materials for how our ventriloquist dummies move. Dummies’ bodies are soft with no structure, so our dummies’ arms just dangle and their legs bend backwards. Throw in their fixed expressions with their wide eyes and big hinged jaws and they’re nightmare material—in the best way possible.”

Woody (voice of Tom Hanks) has always been confident about his place in the world, and that his priority is taking care of his kid, whether that’s Andy or Bonnie. So when Bonnie’s beloved new craft-project-turned-toy, Forky (voice of Tony Hale), declares himself as “trash” and not a toy, Woody takes it upon himself to show Forky why he should embrace being a toy. But when Bonnie takes the whole gang on her family’s road trip excursion, Woody ends up on an unexpected detour that includes a reunion with his long-lost friend Bo Peep (voice of Annie Potts). After years of being on her own, Bo’s adventurous spirit and life on the road belie her delicate porcelain exterior. As Woody and Bo realize they’re worlds apart when it comes to life as a toy, they soon come to find that’s the least of their worries.

Is Ralph Breaks The Internet the Wreck It Ralph Sequel We've Been Waiting For? | Audience Reviews an...
My Dolby Cinema Viewing Experience and Moana Review
The Lion King Signature Collection - on Blu Ray and Digital HD
Chat with Bernard Davis Jones and Marcel Spears of ABC's #TheMayor #ThorRagnarokEvent #ABCTVEvent