From London to Wakanda – Daniel Kaluuya and Letitia Wright

London born actor, Daniel Kaluuya, plays the role of W’Kabi in Black Panther, who is the head of security for the Border Tribe. We were especially excited to meet and talk to him about how he came to be a part of the Marvel Universe, his thoughts on the film, and especially his reaction to being nominated for an Oscar for his role in the movie Get Out.

Letitia Wright, who plays the show stealing role of Shuri in Black Panther, T’Challa’s sister and the brains behind both Black Panther’s and much of Wakanda’s futuristic technology. At only 23 years old, she has had quite a few credits to her name, most notably her debut of role of The Girl in Danai Gurira’s highly acclaimed production, “Eclipsed.” (Fun fact: the role was later played by Lupita Nyong’o). 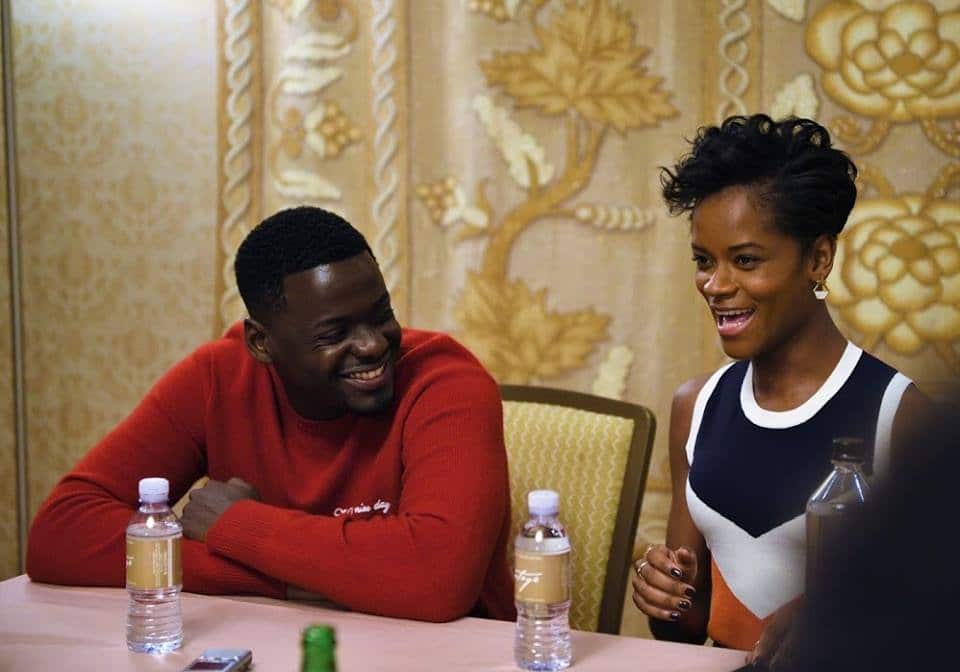 We quickly learned that these two stars have had quite a friendship for many years. Their support of each other’s success was so genuine and of that of a close brother and sister. Our interview could have easily lasted for hours, but here is just some of what we discussed.

Daniel Kaluula on Erik Kilmonger and the Black Experience: 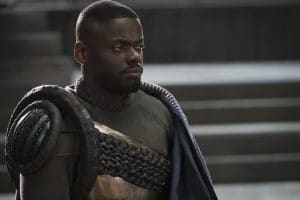 Daniel Kaluula sort of brought to light during our conversation. Of course, with me being a first generation Liberian American and Daniel Kaluula having his roots in Uganda though raised in London, it’s somewhat of a shared experience. In the movie Black Panther, there’s a sense of this cultural displacement experienced by the movie’s villain, Erik Kilmonger.

I feel Killmonger’s one of the best villains I’ve seen. That kind [feeling of] what is there to do with pain, and how you deal with pain real, really informs how you move forward.
And it informs who you are and what you do and the energies and the people that are around you. As black people, everyday is pain, you know? That’s the currency of black people in the west. A lot of our films and a lot of our content is dealing with trauma. A lot of our media [is dealing with] this trauma.
What’s amazing about this [film] is it deals with this and it talks about these two roads. You know, it’s about other. It’s about joy, it’s about a brother and sister, it’s about family, it’s about communities, nations, it’s about pride.

For Kaluula, the scene that struck him the most was when Erik Kilmonger (Michael B. Jordan) and T’Challa (Chadwick Boseman) meet and Erik is greeted in a native language, but responds with a simple, “Sup.” It’s an otherwise funny moment, but as Kaluula stated, “Now, that’s how, that’s my life.”

And in that exchange, it means that so many people are being seen more widely and proud. So, all black experiences within this film is being touched upon within this film. And I just want people to feel seen.

Letitia Wright on Being a Black Princess on Film

I’ve said this before, but Shuri is one of my favorite characters in Black Panther. She’s the smartest woman in the 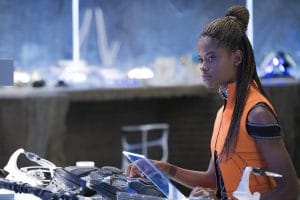 world and remains true to herself and her family. We asked her about what it felt like to represent a black princess on film and whether or not she felt she was modernizing the way girls think around the world?

It’s crazy because this film is pretty much years of prayer. I would pray when I was a teenager just getting into acting that whatever I do, I just want to be a vessel to be of inspiration. Doesn’t have to necessarily mean that that character is not flawed or has to be a perfect character but just to inspire.
When this opportunity came up, I understood the magnitude of Shuri in the comic books. I understood where her arc is and where her journey is and it’s huge.

I understood what was gonna be happening, I understood the magnitude of the film, I understood that I’m standing with Daniel, Lupita, Chad, Ryan, like Michael… I could see what was going on and I could see what would be the result, so what I tried to do was just play and tell the truth. Knowing that as long as I do that and I do it to the best of my ability and I am a vessel for that, then hopefully by God’s grace like young people will be inspired. If some, if a kid can be like, ‘man, I want to do science’… I’m not trying to force it down your throat… It’s kind of like, I’m just gonna be the vessel and be real. And be like, ‘science is cool, Shuri is cool, she can you know, create stuff and not be looked down upon,’ and just play the truth of that.

Then Daniel recalled a time on set where Letitia walked by in costume and found a little girl just in awe. And the whole while on set, Kaluula would assure her as a brother to a sister, “Tish, you’ll be a vessel for something really beautiful.”

And she most certainly will.

Will Rachel House be Taika Waititi's Good Luck Charm in Thor: Ragnarok? Audiences will decide! #Tho...
A Night with the Marvel Stars at the Avengers: Infinity War Red Carpet Premiere in Hollywood
Evangeline Lilly on being the first female superhero in a Marvel title
7 behind the scenes secrets from the set of Single Parents