Disney World is the happiest place on Earth and I don’t think it is even possible to be sad or have a bad time there. What you may not know is that there are a ton of behind the scenes or hidden things among the world of Disney that keeps the magic alive and makes it the amazing place that everyone loves today. Today I am going to be sharing with all of you 15 hidden facts about Disney that you may not know about, so if you’re in to learn more the wonderful world of Disney, keep on reading! 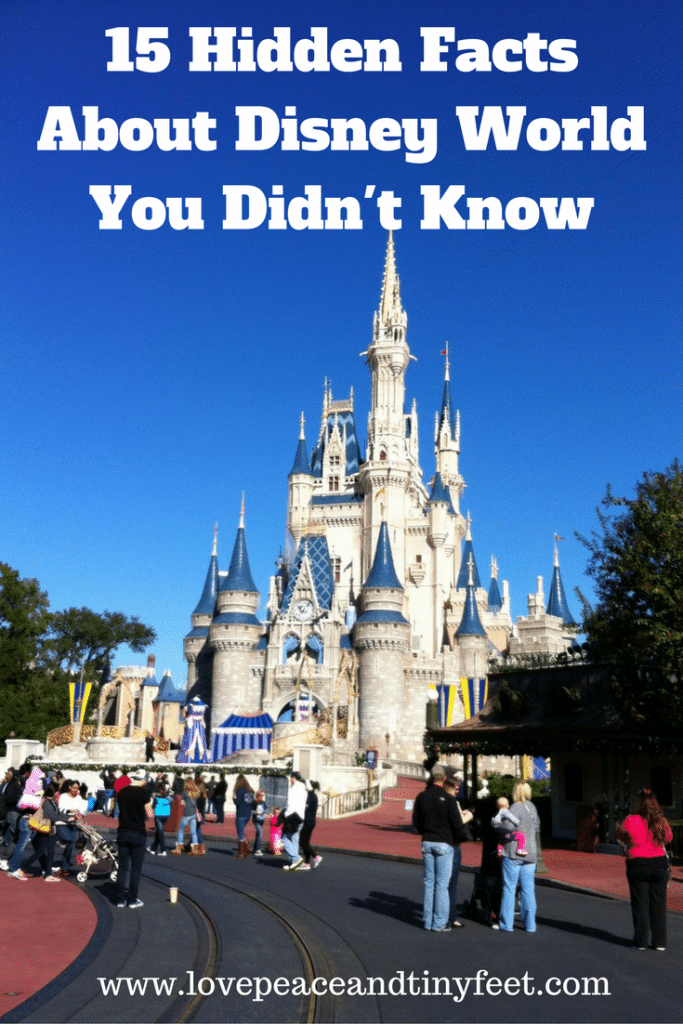 Note: This information was compiled from a Disney expert.  Facts may be subject to change.

2. Scent Release: Have you ever noticed that certain parts of the park have a certain scent and it just makes you feel happy at the park? Well, that’s all because Disney does that for you. Disney releases certain scents throughout the park to make each part very special. Around the holidays of the year they release other scents along Main Street in order to correspond with the holiday.

3. Andy’s Coming!: There has been a longstanding belief that if you’re walking around the park and you happen to be passing by the Toy Story Characters yell “Andy’s Coming!” you’ll also get to watch the characters freeze and drop to the ground just like they do in the Toy Story movies. Well, as cool as that sounds, unfortunately, that’s only a myth.

4. Cats are Everywhere: Have you ever seen a cat roaming around Disney World? Well, they are aware that they are there and they don’t mind. Years ago they noticed that cats started popping up around the park and they decided to let them stay because everyone loves cats and they also help to keep away any rodents or pests that could come into the park.

5. Find Buried Treasure: While you’re waiting in line for the Haunted Mansion, look for a diamond ring embedded into the concrete. This is said to be treasure left behind by the hanging bride!

6. Underground Tunnels: When it comes to traveling around the park in order to avoid getting in guests way or causing distraction there are underground tunnels that Cast Members use to travel throughout the park.

7. Pin Trading: A lot of people know about pin trading but a lot of people do not as well. If you didn’t already know whenever you get a Disney pin, you can trade them with not only fellow guests at the park but also Cast Members as well. If you see a Cast Member with a certain pin that you would like, all you have to do is walk up to them and ask for a trade and they will trade you every time.

8. Keeping Disney Clean: In an effort to be convenient for guests as well as keeping the park clean, Walt thought of everything! In Disney parks there is a trash can every 24 feet so you never have to worry about hanging on to your trash and people are also a lot less likely to litter with so many trash cans around.

9. Look Out for Mr.Toad: Mr.Toad’s Wild Ride was one of the first rides at Disney World on opening day but it eventually was closed down. In order to pay tribute to Mr. Toad you can find his tombstone in the Pet Cemetery on your ride through the Haunted Mansion.

10. Ride Cinderella’s Horse: If you ride Prince Charming’s Carousel you can find a horse with a golden ribbon in it’s tail, this is said to be Cinderella’s horse! That means that you can ride the same horse as Cinderella.

11. Whispering Goofy: When you enter through Main Street if you look to your right, there is a bench that has a Goofy statue sitting on it. If you sit down next to Goofy you just may get the surprise of him starting to talk to you! It doesn’t always happen but test it out and you might get the experience. Hint: He’s in a purple and gold outfit.

12. A Nod to The Creators: The second story windows along Main Street appear to just be ads but they are actually dedications to the people that worked hard to create and build the Magic Kingdom. Charles Ridgeway, Dick Nunis were a few of the fake names Walt used to buy the land that you will see listed on the right, above the glass shop.

13. See Cinderella Transform: If you go to the fountain behind Cinderella’s Castle you will see Cinderella as a bronze statue in her maiden/peasant form. However, if you stand right in front of her and bow to the Princess the crown painted on the wall behind her will appear to be put on her head now. You can see Cinderella instantly transform from maiden to Princess.

15. Look for Hidden Messages: If you go on Peter Pan’s Flight as you go through the nursery you can see children’s blocks that spell out Disney as well as P Pan! It’s fun to look for new experiences in rides that you are familiar with.

16. Open 24 hours on a leap year?:  This is not an official rule, but rather something that has happened in the past on a February 29th.

Disney World always just seems to be so effortless and like everything flows so perfectly. With these hidden secrets you get to see just how much time and effort is put into making your experience amazing at the Magic Kingdom. I hope you enjoyed learning more about the Happiest Place on Earth and I hope you enjoy your future visits even more than you did before.

How to check for bed bugs in a hotel room or other public places
My Real Deal Review of Landmark Resort at Myrtle Beach
Last Week of the Atlanta Fair - Here's what you need to know!
Christmas at the Georgia Aquarium #FestivaloftheSEAson