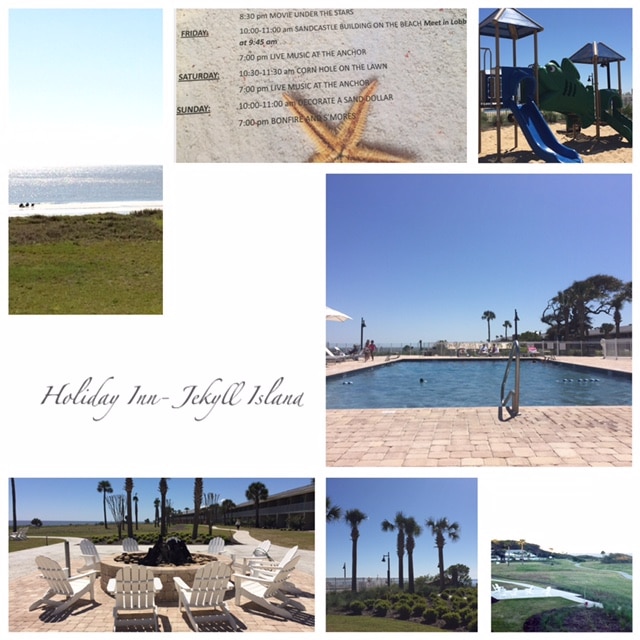 This past week, I had the opportunity to visit Jekyll Island with my family for the first time during Spring Break. Living in Atlanta, it’s always a pleasure to find a fun getaway within just a few hours of Atlanta. Jekyll Island is just under 5 hours away and a pretty easy drive even for those who aren’t just in love with road trips. Plus, if you have little ones, you’ll love some of the really kid friendly treasures Jekyll Island has to offer.

Here’s the ideal, ordeal, and real deal guide to traveling to Jekyll Island with kids:

Jekyll Island has a small, but substantial number of hotels and lodging options, many of which are Oceanside. We were hosted by the Holiday Inn Resort, which we found to be a perfect fit for ours and other families that stayed there as well. I highly recommend you go for one of their suites, as they come equipped with a kitchen, pull out couch and a spacious living area for other family fun such as our game night. Yes, we had a super fun family game night on one of the cooler nights and it was awesome! It was amazing how quickly my kids made themselves at home in the hotel – mess and all! 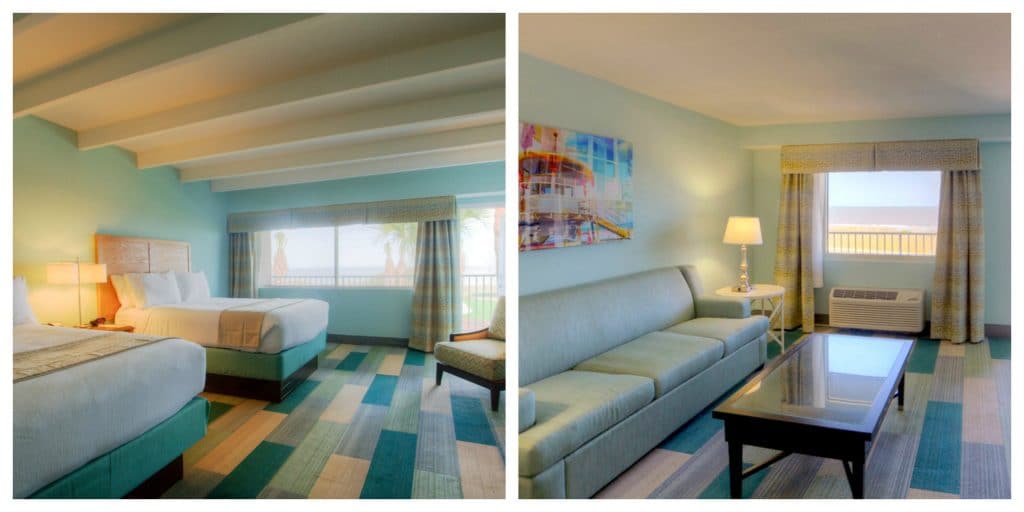 The kitchen comes with a double burner, refrigerator, and full sized fridge. This really helped us cut some costs as far as our meals, as we bought a few staples for a few meals and snacks.

Other amenities we loved at the hotel included an activity room for kids, outdoor playground, onsite cafe (with free coffee mornings); in addition to some standards- outdoor pool and jacuzzi, fitness center, business area, etc. The Holiday Inn Resort also hosted a few daily events for guests. I didn’t get a chance to attend all of these, but it’s great to have them as an option.

Finally, all rooms have an oceanfront view from the rear, so there’s no up charge. The beach is literally just a quick stroll away, so guess where we spent most of our time??

While, yes, hanging out at the beach is certainly a viable option when the sun is out, Jekyll Island does offer some fun things to do with the family. One of the most popular activities we actually took part in was a Bike Rental. I would’ve loved to be able to ride my bike solo, but we had to find other options since my youngest can’t ride yet. So, just imagine me and my husband getting on one of those 4 person bikes so that we could pedal the kids…I couldn’t believe it myself, but we did that and had a blast. Note: It’s a pretty decent workout peddling this thing, so your thighs will thank you in the end! 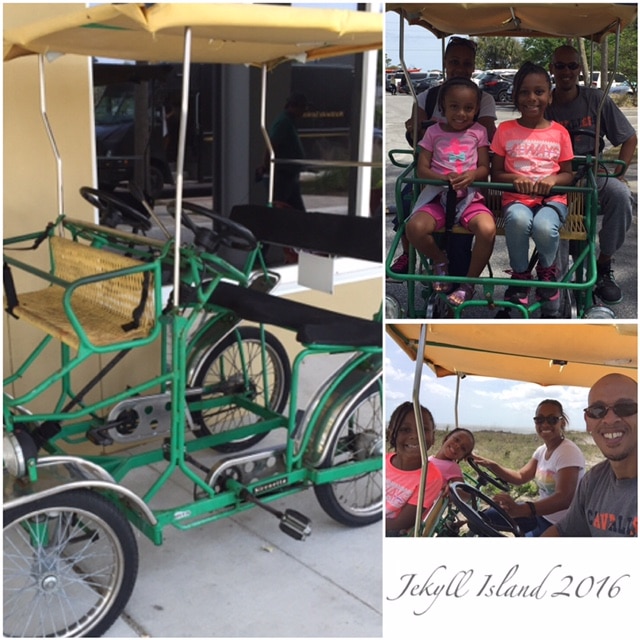 The Georgia Sea Turtle Center was one of Leila’s favorites.  It’s actually a non-profit rehabilitation center for sea turtles that have sustained injuries or illnesses.  We got there just in time to visit the “hospital” and meet the sea turtles who are currently being treated there.  We also enjoyed the “My Sea Turtle Journey” game, where we were each given a card to stamp at various exhibits to tell the story of sea turtles.

There are also Jekyll Island Tram Tours that take you through some historical landmarks of Jekyll Island. These are caught at the Jekyll Island Museum and leave just 3 scheduled times a day, but be warned: these tours sell out pretty quickly during busy seasons, so get there early!

Miniature golf is one of our family favorites and we enjoyed out time on one of 3 18-hole courses. Sure I lost this round, but we still had a lot of fun. By the way, here’s yet another perk for parents- kids 5 and under play free! 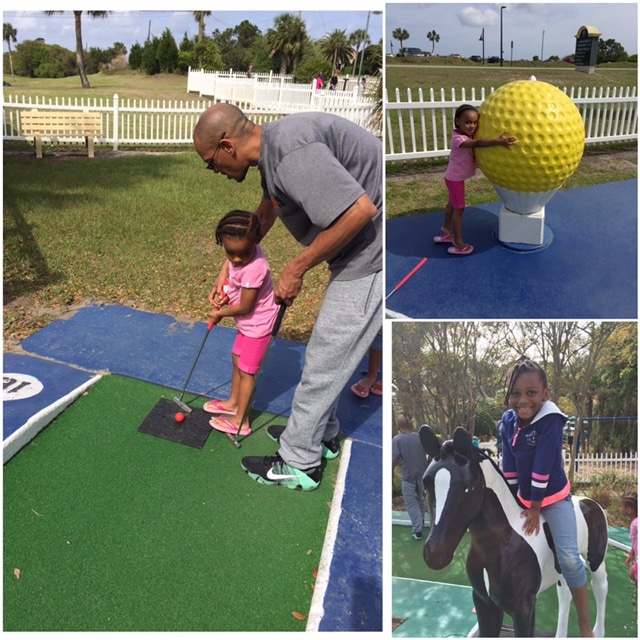 Last, but not least, Jekyll Island is home to the Summer Waves Water Park. Unfortunately, it won’t be opening for a few more weeks, so I didn’t get to explore it for myself, but I have heard some good reviews about it.

I mentioned that we saved some money cooking and snacking in the room, you knew a bunch of foodies like us couldn’t resist dining out and exploring what the island has to offer. The Anchor at The Holiday Inn Resort at Jekyll Island was a great option for breakfast and lunch, especially because of the fact that resort guests enjoy their Kids Eat Free deal with just one paying adult! That alone was a huge selling point for us, in addition to the free Mimosa on Mondays! 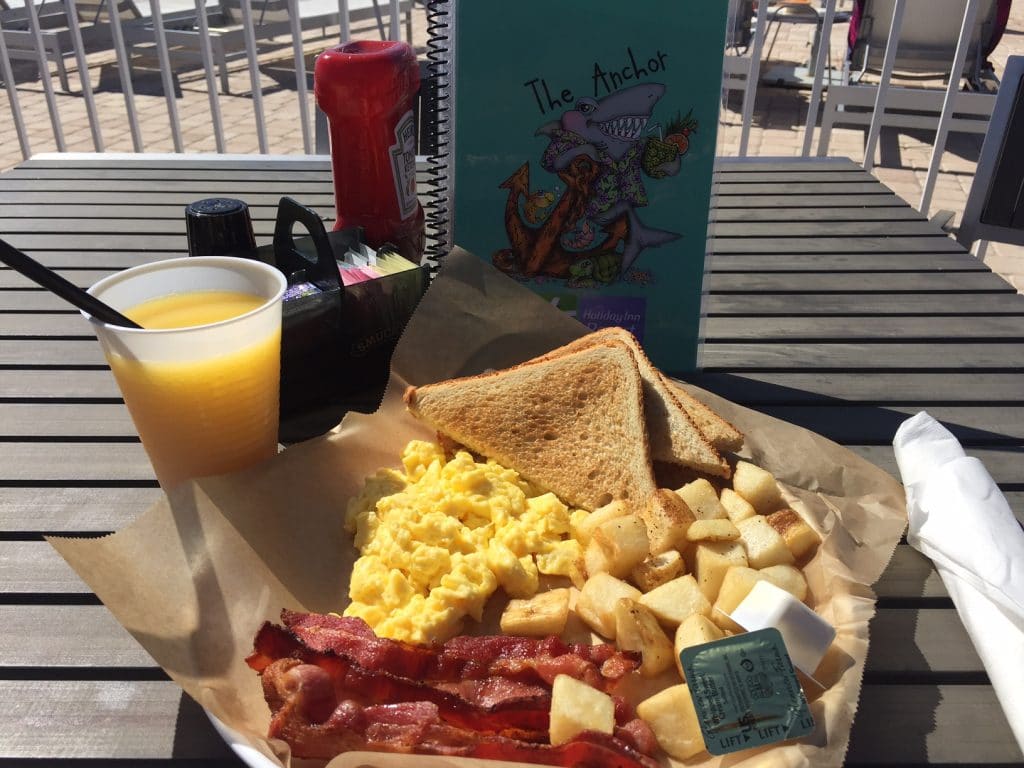 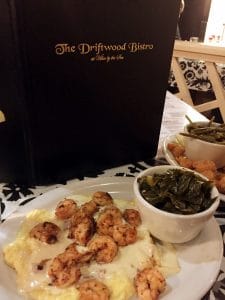 Another restaurant we actually found while researching online and the photos alone had our mouths watering! It’s one of Jekyll Island’s most popular restaurants called Driftwood Bistro. Just how popular? Expect a wait of 40+ minutes on a Tuesday at dinner time! Service was great – the owner even made it a point to come and chat with us (NOT knowing that I was a blogger) and it’s definitely a great choice for some wholesome and delicious southern cooking. Warning: Those rolls are addictive! You cannot eat just one!

Finally, one last gem we discovered on Jekyll Island was a little BBQ spot called Love Shack hidden inside of the Jekyll market. Rumor has it that it was where you could find the tastiest shrimp on the island and after trying their fried shrimp platter, I can’t dispute that rumor!

Finally, the kids really enjoyed local frozen yogurt spot called Fuse.  They were excited about the toppings and of course I had to try some to make sure it was legit too.  🙂 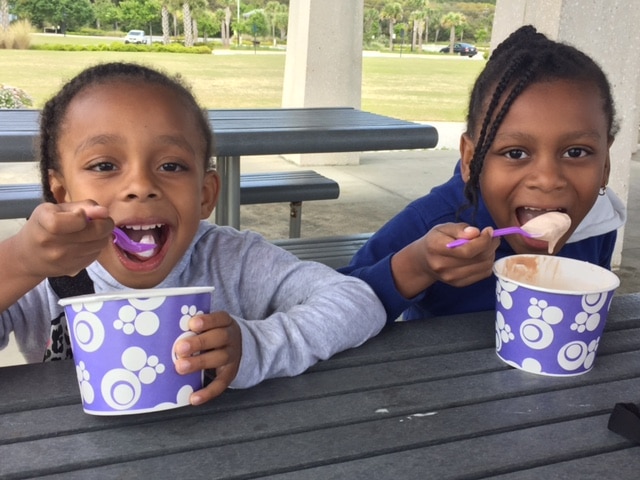 What you should know before visiting Jekyll Island

Here are a few important things you should be aware of if you plan to visit to Jekyll Island:

1. There is a fee to enter the island. It’s described as a “national park fee” and it’s $6 per day or $28/week. You only pay upon entering the island, so if you don’t leave, you won’t have to pay again. The daily rate is valid for 24 hours, so you have a little leeway during those first few hours of your visit.

2. As these are beaches against the Atlantic Ocean, the water is not inherently warm. In fact, between the cool ocean water and the unbearably cold pool at the hotel, I had to make sure my kids warmed up in the jacuzzi before walking back to our hotel room.

3. Gnats!!! Upon pulling up to the island, we noticed a swarm of gnats. I comforted the kids by telling them, “Don’t 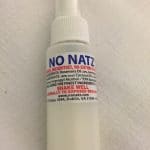 worry, gnats don’t bite,” but I was wrong this time. They do bite and the bites hurt! Apparently, these critters come by the island from March to October. Fortunately for us, we were let on to this product called No Natz that especially repels these gnats and it really did work for us in keeping them away. Several local shops you’ll find sell this.

Spring Break, summer vacay, or just a quick getaway for a long weekend – Jekyll Island is an excellent choice for a relaxing family vacation. There’s plenty to keep the kids occupied, but still not a trip that will leave you needing a vacation from your vacation, if you know what I mean. Summer travel to Jekyll Island may be most ideal for beach goers, but even in the Spring, we were able to enjoy the beach and there’s still plenty of family fun for the whole family.

Have any of you been to Jekyll Island with Kids? Please share your experience below!

New attractions coming to Disney Parks around the world
Tennessee Aquarium - Georgia Aquarium | What are the differences?
Introducing the all new JUSTICE LEAGUE: Battle for Metropolis ride at Six Flags Over Georgia
6 Ways to Save on a Disney Vacation