I know a lot of Marvel audiences might not be familiar with the character of Skurge in Marvel comics. I had to do a little research myself to 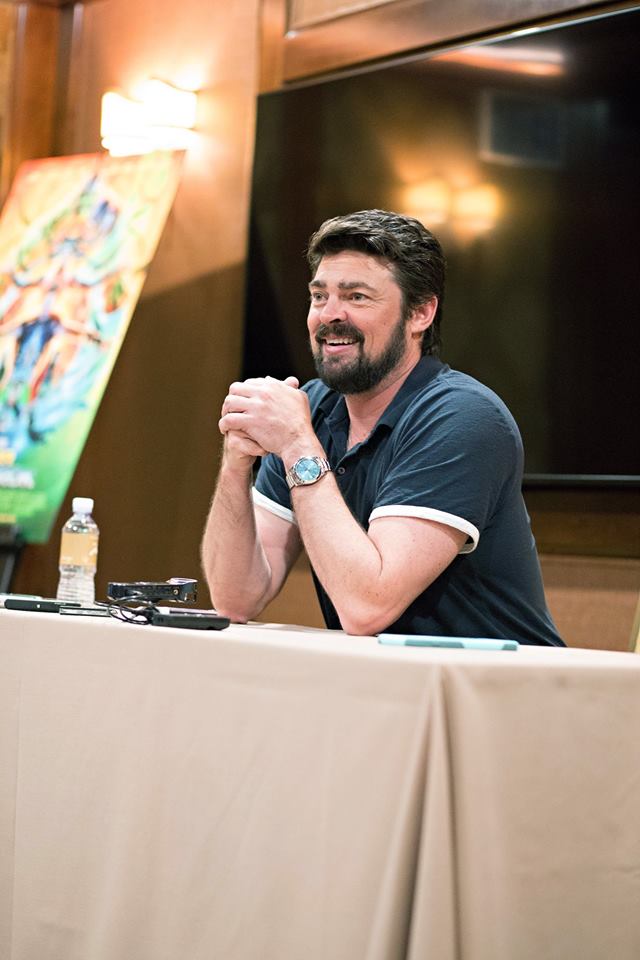 find out that Skurge was originally depicted as a supervillain and member of “Masters of Evil” – long-time antagonists of the superheroes of Marvel universe, including Thor.

Skurge, widely popular as “the Executioner,” was a recurring villain for many years. With time, he had turned into one of the most relentless and powerful enemies of Thor. Apart from that, he had eventually proved himself as a brave, valiant, and courageous warrior, as similar to Thor himself. His combat skills were extraordinary. Skurge used many traditional weapons and modern human weapons, such as axes, blades, and assault rifles. He even possessed a superhumanly sharp vision that made him a peerless hunter.

In the upcoming Marvel’s Thor: Ragnarok, Karl Urban portrays this iconic character. He was one of the warmest actors we experienced during the Thor Ragnarok event and took the time to personally greet each and every one of us in room.   We got to sit down with him to talk about the character, his evolution, and bringing the character to a modern day Marvel Universe.

How Skurge is introduced in Thor: Ragnarok

You definitely see a hint of the Skurge character traits as he is introduced in the movie. Karl Urban recalls how in taping the introduction scene, Skurge is supposed to be trying to woo the young ladies amidst a background of stolen things that Skurge had had pillaged from the universe. He’s a bit comical in his behaviors and mishaps and flaws. As the movie progresses, however, you witness an inner turmoil in the character as he struggles between good and evil.

Karl Urban on The Evolution of Skurge | Thor: Ragnarok

Skurge has an emotionally compelling journey

When Karl Urban first viewed the script for the character of Skurge, he notes,

“Here’s a character that’s put in a situation where he has to make a decision. He has to align himself with a cause that he does not believe in, but it’s, it’s the only thing he can do in order to survive. And I thought that was a very interesting moral dilemma. Then, once he’s crossed that bridge and he realizes there is no turning back, he is looking for a way to redeem himself and that was ultimately his journey. It resonated on the page. So I had full confidence that it was going to translate onto the screen.”

Plus, he notes that one of the other reasons he decided to take this role was that fact that he’d get to work alongside Cate Blanchett for the majority of the film.

Skurge is not a stereotypical villain

“It’s always a mistake to play a, uh, stereotypical caricature of the villain. You know, just to twirl the moustache, wear a black hat-that’s pretty boring. What makes a character, in my opinion, interesting is the faults and the flaws that you can understand. And in this case, it it’s pretty clear that this character is just trying to survive.”

Skurge and his Internal Repulsion

I’ve hinted at the fact that Skurge undergoes a major evolution in the film and, as Karl describes, the process is palpable. Karl Urban also does a great job of portraying this on the big screen!

I’d love to tell you guys more, but I don’t want to spoil the movie for you. Suffice it to say that I enjoyed getting to know the character of Skurge and Taika Waititi did an excellent job of defining this role and its evolution throughout this film. As for what’s next for Karl Urban – how about a Dredd TV show? He shared with us that he’s in the process of developing the show, which, isn’t necessarily a sequel to the movie, but more than likely a reboot or reimagining. We’ll be watching!

Thor: Ragnarok is in theaters on Nov. 3rd!