Yes folks, you read that right. It was just a couple of girls (myself along with Alice Chase from The Thrill of the Chases) out for an afternoon joy ride in San Antonio in a brand new Kia Niro crossover hybrid vehicle. Mike Torpey, the designer of the Kia Niro, happened to be traveling along the same route, but an introduction had not yet been made. By this time, we’d already been driving for several hours, still had almost a full tank, and plenty of adventure still left in us. All of a sudden, we spot an innocent, unsuspecting Mike Torpey in the background, gleefully enjoying some Korean BBQ and chasing it with some Texas iced tea. Alice and I knew what we had to do… 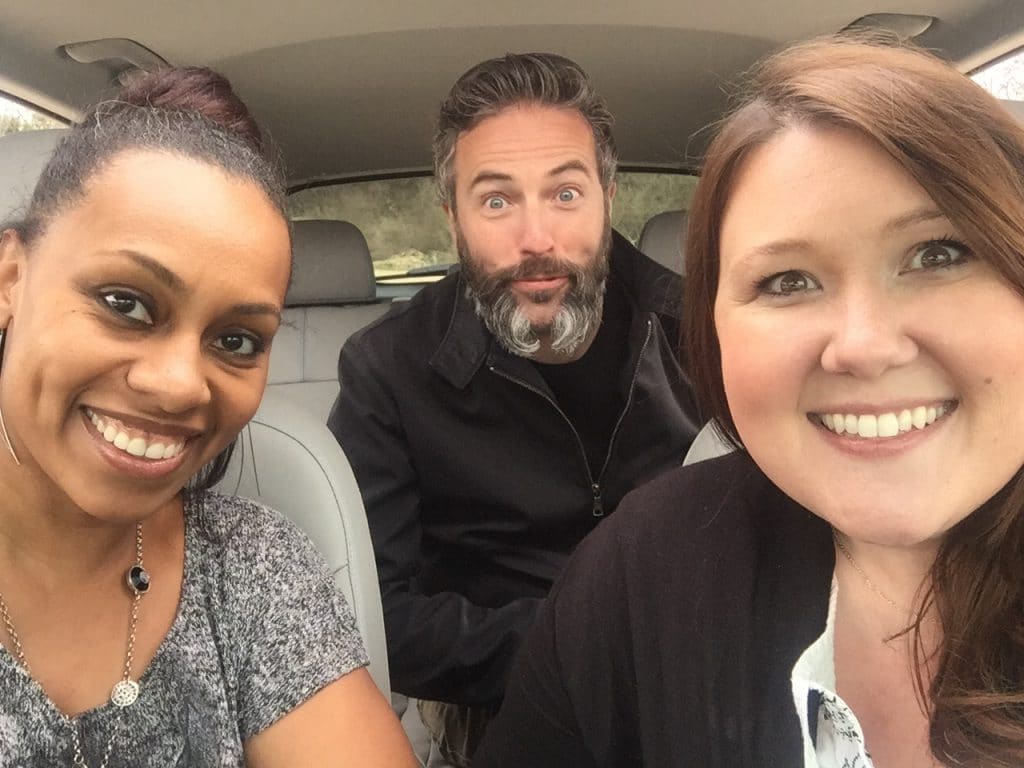 So we lured Mike into our Niro and rode off into the sunset. Stuffing him into the backseat and demanding he do whatever we tell him.

Ok. That last part didn’t happen quite like that. We had some permission…at least enough to avoid a police car chase. Nonetheless, this poor man still had not a clue about what was about to happen! 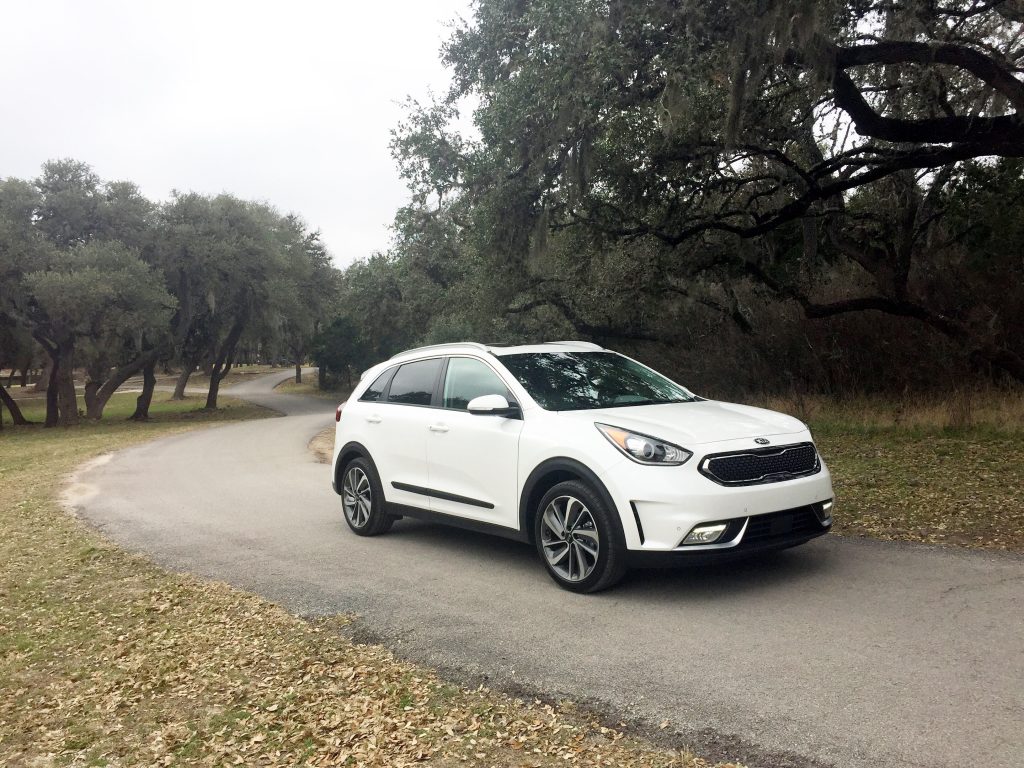 We proceeded to drive down the highway, Mike Torpey in tow. To be honest, we didn’t really have a plan in mind, just to give the Niro a good spin and maybe steal some intel from the guy who knows the car best. But the great thing about life is that sometimes, the coolest things happen when you least expect them. 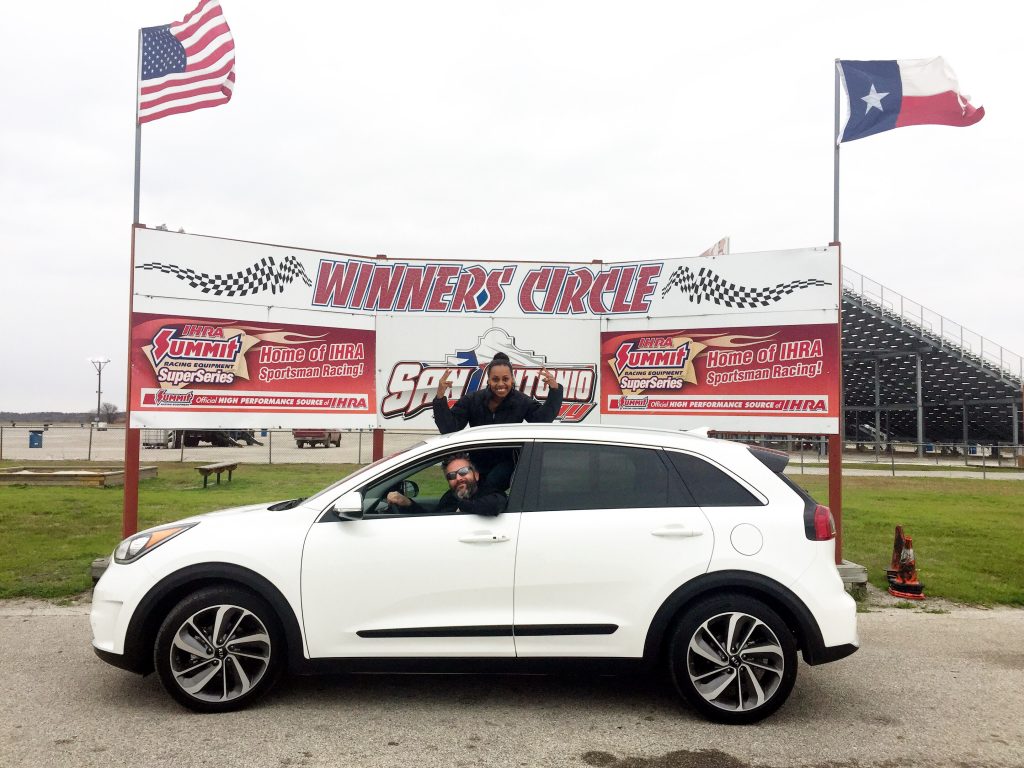 So, as we’re driving, Alice pulls off of the road and attempts to follow signs to the San Antonio Raceway. Who would’ve thought we’d get to do any more there than take a few cool pics in a pretty sexy car around the raceway? Like, really, who would’ve thought we’d actually get to drive that baby full speed on a drag strip?!!! Don’t believe me, just watch:

And just at that moment, it became clear that my perfect family road trip vehicle would secretly moonlight as a powerful road warrior for those of us who welcome a little adventure and fun in our day to day lives. I’ve driven other Hybrid vehicles several years ago, but those experiences totally paled in comparison to my Kia Niro experience. Between the 104 horsepower engine, standard sport mode, 50 mpg fuel efficiency, and other advanced technology features, the Kia Niro truly exemplifies the 4 key components it stands on: Practical, Efficient, Engaging and Progressive! 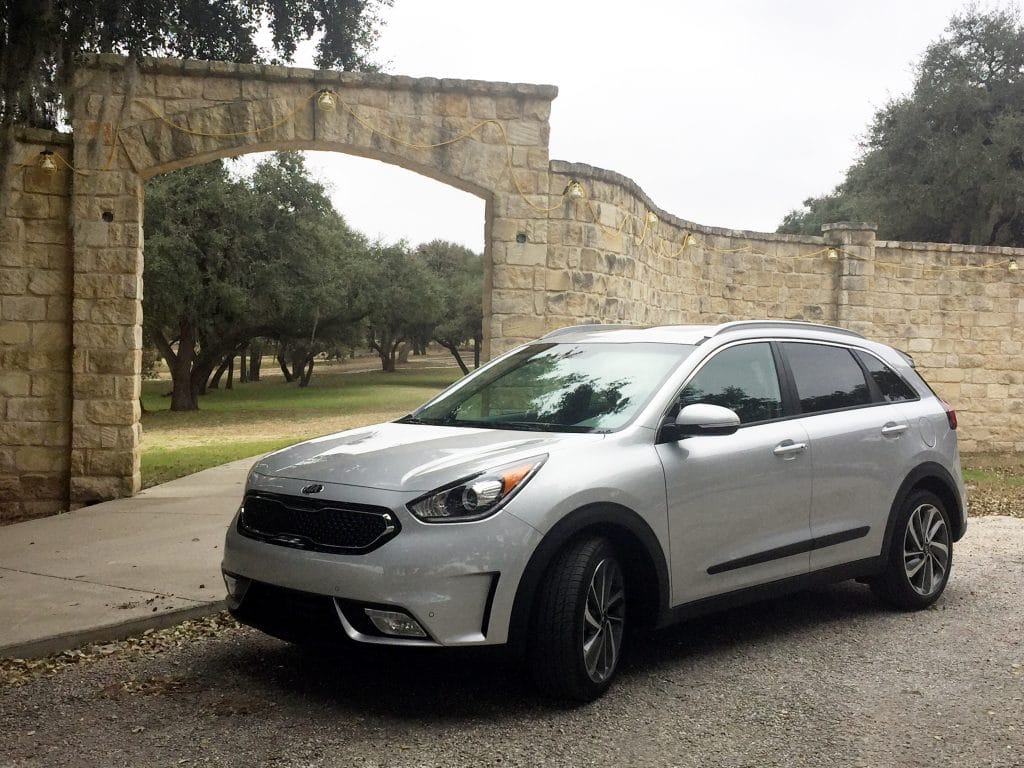 Now, back to the story…

In addition to us “forcing” an innocent man to actually race the vehicle he designed, we did also subject him a small line of questioning. Here are some cool facts we learned about Mike Torpey and his experience designing the Kia Niro:

You’ll be hearing a lot more from me about the Kia Niro in the upcoming weeks and months. In the meantime, follow along my Niro Journey on Instagram and Twitter with the hashtag #ExperienceNiro.

The Ultimate Coachella Packing List and More Coachella Music Festival Tips! {Guest Post}
What to Expect During a @Kia Ride and Drive Event
20 Enchanting Castles Available For Rent
10 most eclectic and eco-friendly road trip stops along the California coast

« Pledge to close your Nutrition Gap, Plus 35 tips to improve your health today
Becoming a Queen Boss: 11 Success Tips for Mompreneurs from Lauren Lake »