One of the things I loved most about the film Black Panther was this tremendous sense of girl power themed throughout the movie. The women of Wakanda were among the key protectors of the nation, also the smartest and best fighters in the entire country. During our recent Black Panther Event in Los Angeles, we had a chance to sit with 2 of the fiercest women of Wakanda, Academy Award Winner Lupita Nyong’o and award-winning playwright and actress, Danai Gurira. 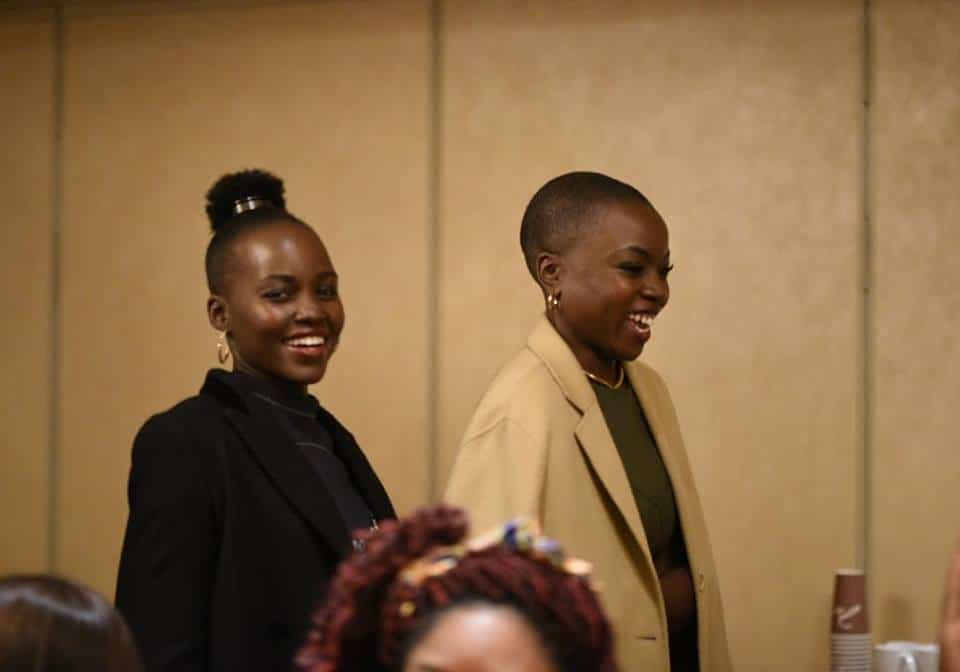 Of course, I’d had the opportunity to meet and interview Lupita a couple of years ago for her role in Queen of Katwe. 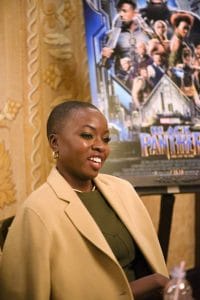 Danai, on the other hand, I had the pleasure of meeting for the first time.

While Danai Gurira may seem like a newcomer to the scene, she has actually earned quite a bit of acclaim in her career as a playwright. Her production of “Eclipsed” (which Lupita also starred in) earned her a Tony Award nomination as well as various awards. She has also appeared in numerous films, including “The Visitor,” “Mother of George,” and NYSF’s “Measure for Measure.” You also know her as Michonne on AMC’s “The Walking Dead” and was involved in the production of the Tupac Shakur biopic “All Eyez on Me.” Gurira was born in the U.S. to Zimbabwean parents and raised in Zimbabwe.

In the movie Black Panther, Lupita plays the character of Nakia, a War Dog and Wakandan spy often imbedded in countries outside of Wakanda to observe and report back. She’s also the love interest of T’Challa and must decide whether she should be guided by her duty to her nation or her feelings for T’Challa. Danai plays the character of Okoye, the head of the Dora Milaje, the all-female Wakandan Special Forces. She is the best fighter in Wakanda who is not named the Black Panther, and she is fiercely loyal to the throne. 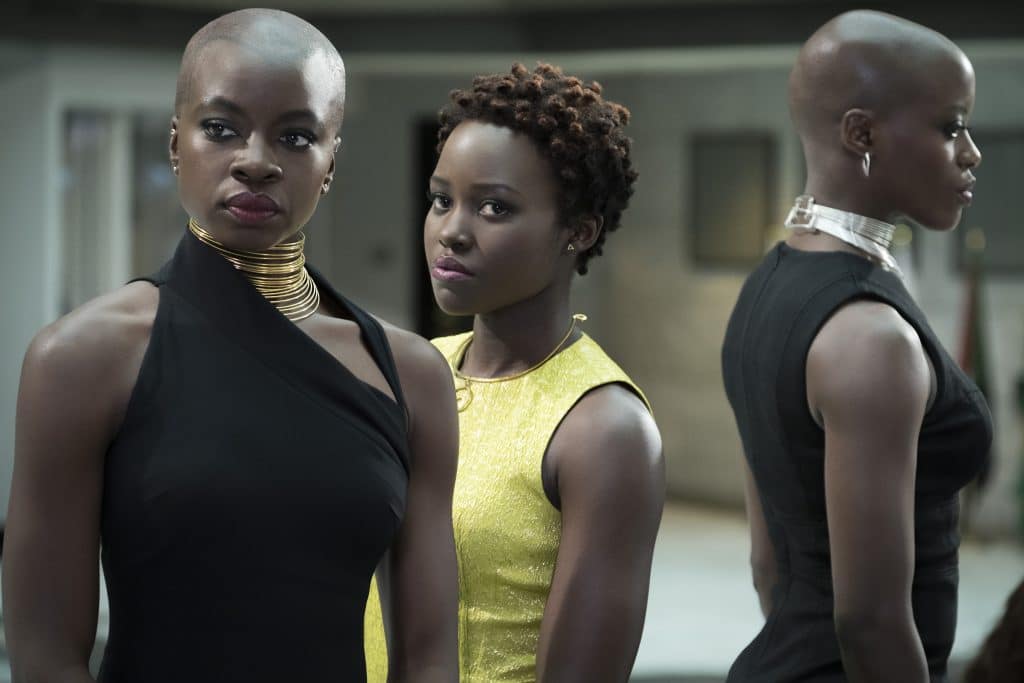 The two of them work together fiercely, along with the other women of Wakanda. We just had to learn more….

How did each of you relate to your characters in the film:

LUPITA : I identify with Nakia’s independent spirit and her loyalty to her country. I understand. She’s a warrior right and she’s the chosen warrior of the River Tribe first and foremost. And then she’s also a war dog, an undercover spy, but as a warrior, as a leader of her tribe, I think it means a lot to her to make her people proud and I understand that. I relate to that and so I think that was my in to figuring out who she was. I love a woman who is on a mission to make a difference which is what she’s on.

DANAI : Yeah, I definitely related to her (Okoye), you know, her power of purpose. She was very purposed and I think she’s been purposed since she was quite small. I was saying earlier I really see her as like a very intense ten year old, you know, and she used to watch the Dora Malaje walking around when she was a kid and that was just her focus in life. I never wanted to be in the military per se but I always wanted, but when I decided what I wanted to do I was very clear about it.

So I could really relate to that about her, about the way that she is so dedicated to her nation and so dedicated to her people and really holds responsibility, the idea that to who much is given much is expected. I feel like she considers Wakanda this gem that she has been given to protect and so she really takes that on as something that is priceless and that she cannot let slip. And so I think that’s something that really propelled me, connected me to her.
The other thing that really connected me to her was the idea — for me — the stakes of losing Wakanda to a guy like…
{Won’t reveal the spoilers}

That was something that I could relate to because I’m – we’re both – from the continent and the passion I have for what I feel the continent could be is very strong in me. I write plays that feed into that. It’s a very powerful thing for me and so the idea of that sort of loss of place, to actually have something as stunning as Wakanda on the continent and lose it really fueled my connection to the stakes of her and the character. They’re very easy to connect to because I’m an African-ist.

Can we talk about how beautiful the scene in the casino was? And the [fight] training process  for both of you! What did you go through and how did you challenge that and still look super graceful while you were doing it?

DANAI : Yeah, we trained a lot. It was a lot of preparation for that scene and [Director Ryan Coogler] wanted to do a one-er. A one-er, for those who don’t know, is the idea of how when she lifts up the gun, then the camera would follow her and then land up on me, up on the balcony. I mean that was a precision and if something happens we’re going back to the beginning, you know?

I loved how they found that [fighting style] for each of us and then they put that into it in training. We owned our characters around those movements.

LUPITA : The training was a big part of getting into character because understanding how someone fights reveals a lot about what their values are and who they are. So when we were first talking about Nakia’s fighting style, Ryan [Coogler] said to me, “she’s street” and that was really all I needed. So by any means necessary, she will use any weapon. Like the Dora Malaje…they don’t use guns, but Nakia has no problem using guns, you know? She will use her shoe. She will use whatever. She will grab whatever it takes to get the job done.

We occupy our own space and then going into battle together, everyone has a different strength to bring to the table and I think that was just such a way to make fighting extremely rich and full of culture in and of itself.

Can you talk about what it takes to bring these characters to life? I know it’s acting, but it represents what we wanna see in ourselves and see on screen. You guys do it in a way that’s so authentic. What is your process in creating these characters?

LUPITA : Well I think for both of us especially when we’re dealing with African representation in story, we feel such a strong sense of responsibility and deep desire to see African women on screen that look and feel like we know them to be. And so with these characters we wanted them to be women that we know. The women that I know are complex and they’re deep and they’re about something other than just the man in their lives and so that was really important to us.

It was also really important to Ryan to have women who are standing in their own in this movie. Women with agency and strength does not mean an absence of vulnerability, but it means that you understand, you have it in yourself to get yourself through things, to seek help…What I mean that is strength in itself is a very complex idea and so it was important to us that the women have that come.

And I think I commend Ryan for this because in the end, his story is not about punchlines and clips. It’s still fun and enjoyable, but there’s an integrity to these people. We really get a sense of what Wakanda’s society is like and we see a society where men and women are participating fully in the development of the nation. And in so doing, they’re reaching their full potential and that’s good for everybody. 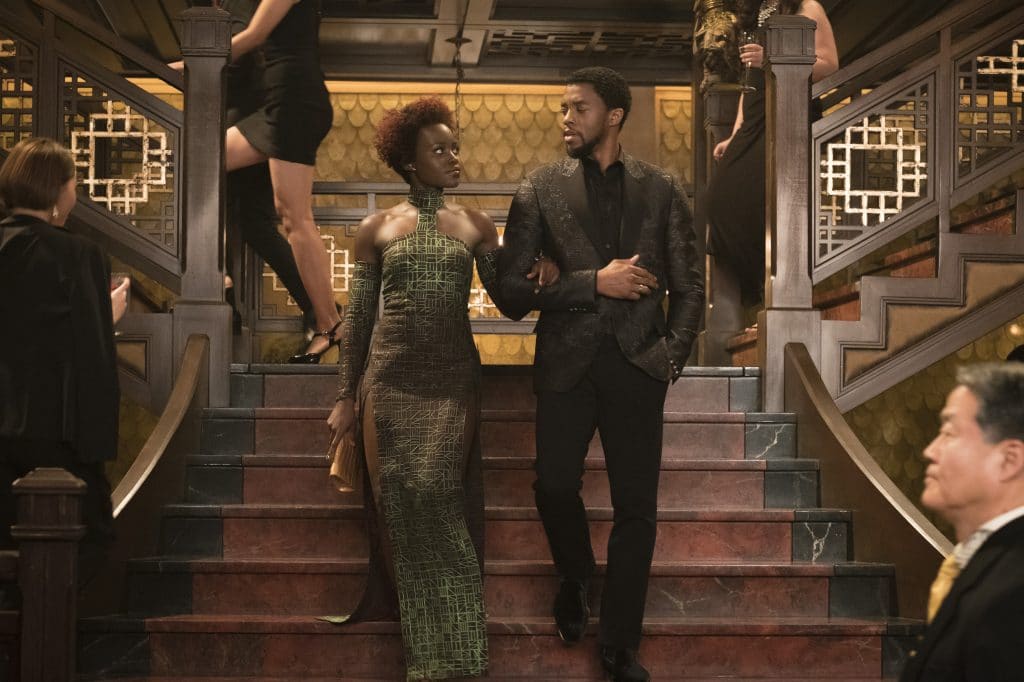 Black Panther comes to theaters everywhere on Feb. 16, 2018. Check out the trailer below and my review of the film HERE.

The Real Magic of Disney's Pete's Dragon
5 things I can share from my "Top Secret" visit to the set of Captain Marvel
My Dolby Cinema Viewing Experience and Moana Review
Captain Marvel on Blu-Ray: Bonus Features and Exclusives

« Marvel’s Black Panther is one of the most revolutionary films of our time. Here’s why…
Exclusive Interview with the legendary Forest Whitaker – Black Panther »