As I shared with you all a while back, I had the really unique opportunity to take a secret set visit to the Captain Marvel set really early on in the production phase.  At that time, there was little known about the film – including the storyline, the tie-in to Avengers: Infinity War, etc.  In addition to being sworn to secrecy about the fact that I was even there, I was forbidden from taking any photos myself or even pulling out my phone as I recall. 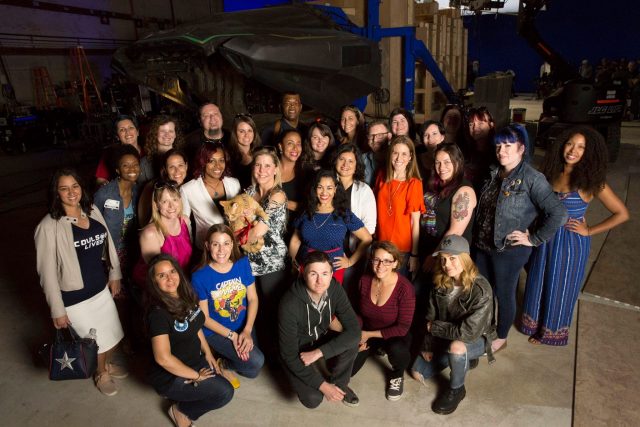 It was all worth it though.  Because Captain Marvel comes to theaters tomorrow, March 8th and all of the world’s (and my own) questions get answered!

Touring the set though was a really fun experience. We got to listen on an actual scene being filmed with Brie Lawson, Samuel Jackson and the soon to be famous feline.  We also got to play around with some fun toys, check out some of the custom built set designs and explore around Brie’s wardrobe… of which, absolutely nothing in there could even remotely fit! Nonetheless, it was quite an adventure.

So now that the cat’s out to the bag, I wanted to share some more really cool facts about the making of Captain Marvel I discovered.  Trust me, it’s going to be extremely fun to keep these in mind once you go see the film this weekend… like… what’s going on in this picture? 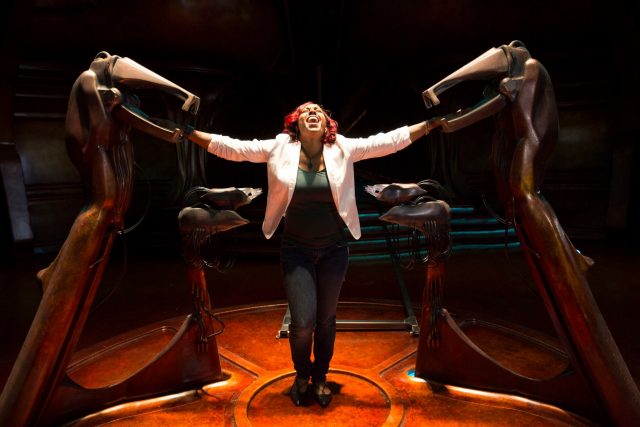 Fun Facts About The Making of Captain Marvel

2. According to director Ryan Fleck,“There are several breakout characters in the film, and Goose the Cat is a scene-stealer!” A unique character in the film—and something new to the Marvel Cinematic Universe—is Goose, a tabby cat, who was played by several different cats.

This is the first time that a cat has been front and center in the MCU. “Goose was primarily played by real-life cats,” explains Jonathan Schwartz. “We auditioned several different cats, and we ended up with a cat named Reggie. Reggie came with a team of three other cats: Archie, Gonzo and Rizzo. They all specialize in certain tricks and performance.”

3. When one of the cats was not cooperating, or the actors didn’t feel comfortable around them, filmmakers used a stuffed cat puppet that Legacy Effects created for the film. And if that didn’t work, they went to Plan B and created a CGI cat that was so lifelike that most people could not tell whether or not it was the real cat. So, the Goose feline character ended up being a combination of several cats and visual effects.

Having a real cat on set turned out to be a bonus for the directing team, Anna Boden and Ryan Fleck. “Sam Jackson was great with the cat, who knew that he was such a cat lover?” says Fleck.

4. “Captain Marvel” is chock-full of action and adventure. So Brie Larson transformed herself to get ready to play a Marvel Super Hero. She committed to months of stunt and fight training to be able to perform as much of the action and fight sequences as she could in the film. Larson trained for nine months to build up her physical strength before filming even began and worked her way to lifting over 225 pounds in deadlifts, 400-pound hip thrusts and even pulling a jeep down the road.

5. In total, the costume department made eight Captain Marvel suits for Larson. For the hero suits, the main fabric was leather with a special finish that was “pearlized” in blue so that it had a sheen to it when the light hit it.

6. While Larson got herself into the best shape of her life to play the role, for Samuel L. Jackson and Clark Gregg, no workout or magic bullet would produce the results needed to make them look like their respective characters did 24 years ago. To create the desired effect, the filmmakers called upon visual effects supervisor Christopher Townsend and the artists at the visual effects house Lola to transform the actors back to the mid-’90s version of their characters. 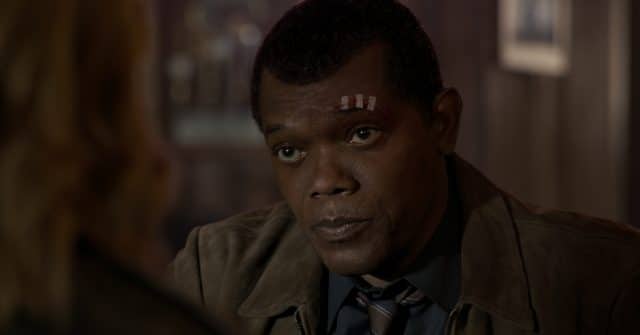 The Set Design of Captain Marvel

7. In all, 40 sets were built in both interior and exterior locations, and in addition to the major sets, prison rooms, engine rooms, decks, airlocks, laboratories and a hangar dock were also practically constructed.

8. To add to the authenticity of the flying scenes, Anna Boden, Brie Larson and Lashana Lynch visited Nellis Air 17 Force Base in Las Vegas for some once-in-a-lifetime training and experiences.

9. While there were many practical locations for “Captain Marvel,” there was also a fair share of stage work where production designer Andy Nicholson and his team created the intergalactic worlds of the Kree and Skrulls. Describing his approach to creating the Skrull spaceships, Nicholson says, “The overall curved design for the Skrulls extended into the interiors of their ships as well. When you see the interior of the main battleship, it’s all about organic lines and curves. And a lot of it was made out of ceramic with a skeleton behind it. We did an architectural language that was about plates and skeletons and the skeletal structure behind that. So, there are layers and layers, and they are all woven organic materials. 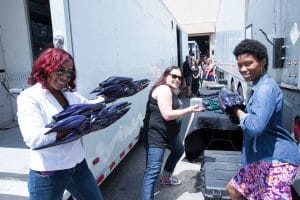 “You can identify the Kree spaceship in the sky because they are that angular shape, metallic and not curvy like the Skrulls’ ships. Besides making it easier for the audience, it also made sense for the world and the species and gave us languages that can be developed.”

10. On two of the biggest sound stages, Nicholson and his team built the interior of the Skrull battleship and the interior of Captain Marvel’s spaceship, which are both multiple-room sets. “I designed all the sets so they start off as one set,” comments Nicholson. “And then by plugging in and out different places, we turn them into other areas within the same spaceship. They each have four or five different variations within them.”

11. One of the biggest sets was the Kree transport system, which features in a scene at the beginning of the film. Nicholson describes how the set was envisioned to fit seamlessly into the Kree world. “We had the idea to do a two-layered city. There’s kind of a top layer, which is exposed, and then beneath that is another level that is all subterranean. Then we thought about how the people would travel between the levels.”

12. One of the largest exterior set builds was the creation of the planet Torfa. To create the world, Nicholson took an

existing sand mine and quarry in Simi Valley and transformed it into a visually dynamic setting for an important scene in the film. Commenting on the mine, Nicholson says, “The mine gave us the opportunity to have an inordinate 400 feet of playing space, by 160 feet wide. We filled that with architectural elements, which are sort of destroyed ruins, and then used some archaeology around that. We also used colored sands to make it even more alien, with the blue and white colored parts.”

13. To create the scene in which Carol Danvers does a crash landing into a Blockbuster Video store, filmmakers searched for an abandoned strip mall and found one in the North Hollywood section of Los Angeles. Nicholson’s team built a new facade including a Radio Shack, a Blockbuster and a dry cleaners. The location looked so authentic that people actually drove up to go into the location, not realizing that it was really a movie set. Creating the interior of the Blockbuster to replicate what it looked like back in the 1990s was a daunting task for the set decorators, who had to research the look and source and make hundreds of VHS boxes, plus recreate the artwork and signage.

Moana Soundtrack - Featuring Music by Lin Manuel Miranda!
Is Ralph Breaks The Internet the Wreck It Ralph Sequel We've Been Waiting For? | Audience Reviews an...
Marvel Studios’ STEM Challenge for High School Girls
My girls got a message from Pumbaa from The Lion King!

« Ralph Breaks The Internet Cameos, Easter Eggs and More
How to Throw a March Madness Celebration at Home on a Budget »