Disney’s new feature film “Moana” sails into theaters this November and I have no doubt that it will be a hit! The film is about an adventurous teenager who, with help from demigod Maui, sails out on a daring mission to prove herself a master wayfinder and save her people. It’s an original story inspired in part by the oral histories of the people and cultures of Oceania and stories of Polynesian voyagers. The film is extremely rich in culture, music and overall family entertainment.

Three thousand years ago, the greatest sailors in the world voyaged across the vast Pacific, discovering the many islands of Oceania. But then, for a millennium, their voyages stopped – and no one knows why. From Walt Disney Animation Studios comes “Moana,” a sweeping, CG-animated feature film about an adventurous teenager who sails out on a daring mission to save her people. During her journey, Moana meets the once-mighty demigod Maui, who guides her in her quest to become a master wayfinder. Together, they sail across the open ocean on an action-packed voyage, encountering enormous monsters and impossible odds, and along the way, Moana fulfills the ancient quest of her ancestors and discovers the one thing she’s always sought: her own identity.

They shared some exclusive behind the scenes clips as well as a few fun facts about the movie and characters in Moana.

First we have Moana – an adventurous, tenacious and compassionate 16-year-old who is struggling to find her true self. While her father, Chief Tui, pressures her to follow in his footsteps and lead their island one day, Moana is drawn to the sea. The people of her village are forbidden to go beyond the safety of the reef, yet the open ocean seems to beckon Moana. When her island is threatened by a terrible darkness, Moana breaks the rules and sets sail on an epic adventure to save her people and find the answers she’s been searching for her whole life. 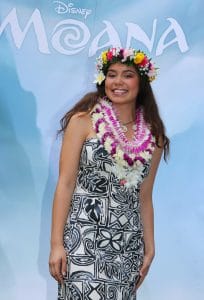 The voice of this tenacious teenager is provided by newcomer Auli‘i Cravalho (pronounced Aw-lee-ee). I got to meet and interview her (post coming up later) and can tell you, she is truly the perfect fit for this character she is just as bold, genuine, and warm as Moana. And here’s a fun fact we learned about her casting – She was the very last person auditioned out of thousands! Talk about saving the best for last!

Next is the demigod, Maui – half god, half mortal, all awesome. Charismatic and funny, he wields a magical fishhook that allows him to shapeshift into all kinds of animals and pull up islands from the sea. Maui was once considered the greatest hero in Oceania, but he is responsible for the trouble that threatens Moana’s people and is now somewhat of a lost hero as he is paying a price for his actions.

Maui’s body is covered with tattoos of all of his extraordinary feats, including a mini-version of himself that acts as Maui’s conscience, appropriately called “Mini Maui.” We actually got to experience a drawing demo of the “Mini Maui” character by Animation Supervisor Eric Goldberg. Here’s my version vs. Eric’s: 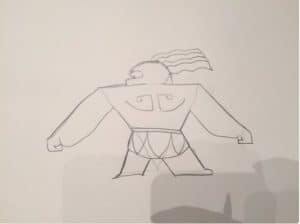 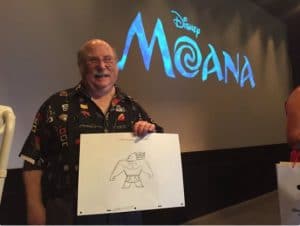 Yes, you can say it…don’t quit my day job.

Gramma Tala is such an important character in the film and represents so many of our grandmothers as she is the profound keeper of ancient stories. She is Moana’s confidante and best friend, who shares her granddaughter’s special connection to the ocean. Although her son, Chief Tui, is a no-nonsense leader, Gramma Tala most definitely dances to the beat of her own drum. She feels in her soul that the ocean has big plans for Moana, but she won’t reveal the legendary secrets of their wayfinding ancestors till the time is right. Rachel House provides the voice of Gramma Tala.

Moana’s father, Chief Tui, is the gregarious and well-respected leader of the people of Motunui Island. He wants Moana to follow in his footsteps as leader of their people, but fears his daughter’s connection with the ocean and the world that lies beyond their reef. Spoiler alert: though it may seem like they are worlds apart, Chief Tui and Moana have more in common than either of them realize.

Moana’s mother, Sina (voiced by Nicole Scherzinger), is playful, sharp and strong-willed; and always has her daughter’s back. Sina appreciates Moana’s longing to be on the water, but much like her hard headed husband ChefTui, Sina wants to protect her daughter from the fabled dangers beyond the reef. Above all, Sina trusts Moana to make the right decisions.

Heihei the Rooster, has already become one of my favorites, mainly because I now know the story behind Heihei’s character. In the version of Moana the world sees, HeiHei is pretty much the village idiot. When the clueless chicken accidentally stows away on Moana’s canoe, he lands a front-row seat for her epic journey. But when Maui targets the feathered fowl as his next meal, kind-hearted Moana sticks her neck out to save Heihei.

What’s interesting about HeiHei is the fact that his character has done a complete 360 since the original version of Moana. He actually started off as a bright, know-it-all sort of character, but after numerous team meetings and threat of getting cut from the film, he was transformed.

Pua is Moana’s loyal pet pig with puppy energy and an innocent puppy brain. He’s guileless and sweet—he’d do anything for Moana. Pua just wants her to be happy.

The Kakamora are wild, coconut-armored pirates who live on a trash-covered vessel that floats freely around the ocean. The Kakamora may be small, but they are ruthless warriors who will stop at nothing to get what they want.

Finally Tamatoa is a self-absorbed, 50-foot crab who lives in Lalotai, the realm of monsters. The conceited crustacean wants to be more than a “bottom feeder” and overcompensates for this perceived shortcoming by covering himself in all things shiny. The avid collector fiercely holds onto his ever-growing array of artifacts, along with a nasty grudge against Maui.

All of these truly relatable characters make up the incredible story of Moana and are sure to pull the heartstrings of every viewer! Be sure to check out Moana in theaters on November 23rd!

Keep up with Disney’s Moana on Social Media:

« 25th Anniversary of Beauty and the Beast – All Disney Princess Films Available for the First Time EVER!
What you should know about Disney Animated Short Film Inner Workings »