I’ll be honest with you guys. I had no idea what to expect in during my interview with Michael Douglas during the Ant-Man and the Wasp event. I mean, the guy is a legend.  He’s been in a zillion classic movies – some of which I saw even before I was supposed to.  Hehe.  He’s a legend across multiple generations of people, with over 40 years of experience in theater, film and television – including the Academy Award®–winning “One Flew Over the Cuckoo’s Nest, War of the Roses, Fatal Attraction, Wall Street, Basic Instinct (ahem…speaking of movies I wasn’t supposed to see), and so many more. 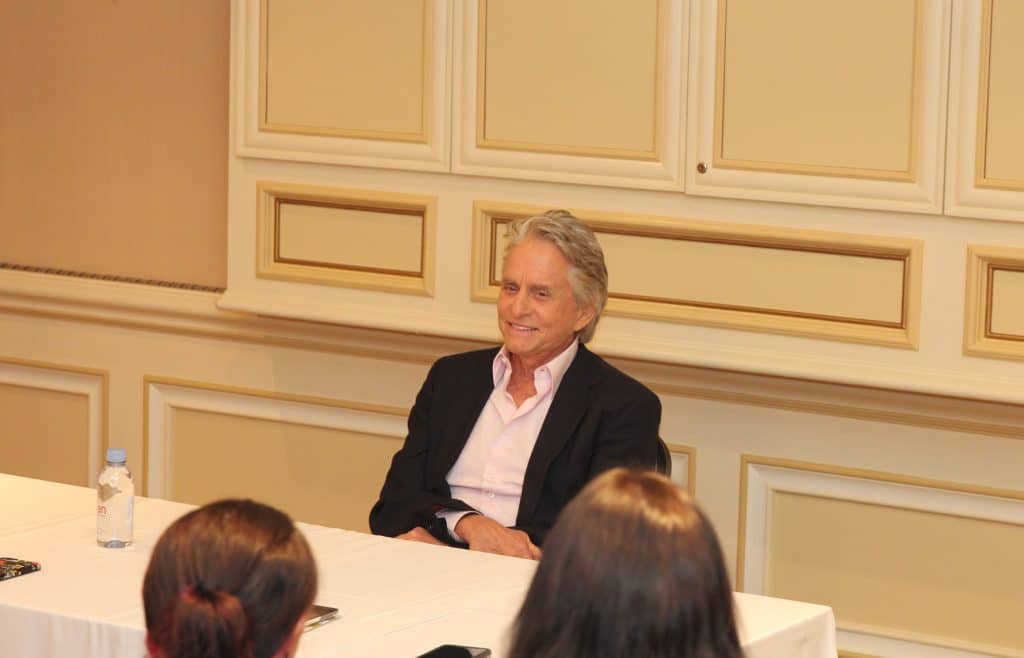 Of course, as you know, he’s stars as the brilliant Quantum Physicist, Dr. Hank Pym in the all new Ant-Man and the Wasp, along with Paul Rudd, Evangeline Lilly and Michelle Pfeiffer.  So what’s it like to interview Michael Douglas?

The guy truly lives up to his legend status from the moment he enters the room.  Very charming and professional.  He was open to all of our questions and seemed genuinely excited to be a part of the new Ant-Man and the Wasp movie.  Even started off the interview with…

We were at a slight advantage during this interview, as we had actually seen the movie before he had. It’s not usually the case that we’re trying to keep spoilers away from the talent too, but it was still pretty cool.  We focused our interview on learning a little bit more about Michael Douglas, his legendary career and on just being Dr. Hank Pym.  Here are some highlights from our interview with Michael Douglas.

On being reunited with the Ant-Man cast again.

MICHAEL DOUGLAS:    I mean, there’s just an inherent relaxation and joy normally about a sequel or whatever they are or also why you look back in the old days, why actors and actresses work together or directors together, you don’t have to introduce yourself again, you know.  You know each other.  There’s a comfort factor which makes it much easier.  People know your own sense of humor.  You’re not going to offend anybody.  So, I mean the comfort factor is really nice. 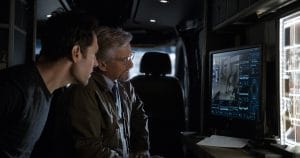 That combined with the fact that Paul is just a sweetheart.  He’s just a great, great guy so it sets the tone.  You know,

most of my career I’ve been number one on a call sheet, the lead, and so to be in a supporting role in a picture like this, you watch how he does it, you assume a lot of responsibility.  If you’re smart, if you’re the first, you set the tone.  You’re the first one on the set, you make everybody else comfortable to make their best performances possible.  I mean that’s just all part of the thing.

On Suiting Up as Ant-Man

So we did get a glimpse of Michael Douglas becoming Ant-Man in the film.  We all wanted to know what that was like for him and did he have a superhero moment during that experience.

Michael shared with us that even in the first Ant-Man, he did feel a little jealous of the other characters suiting up, so this was the perfect superhero moment for him. Not to mention getting to look 30 years younger!

On Evangeline Lilly becoming The Wasp

We’re all so excited about Evangeline Lilly as The Wasp! First, she’s the first female Marvel superhero named in a movie title. Also, she does such an amazing job as The Wasp!

Michael Douglas:  I was excited for Evangeline because I remember-if you remember the end the first one-I show her Janet’s suit and there’s this look in her eye as Hope when she sees her mother’s suit.  But what I was looking at her when she was doing the scene, I saw Evangeline going I’m going to be a superhero. I could see her.  She was ready to go and excited.

On working with Michelle Pfeiffer

Michael Douglas: Michelle was just such a treat.  I’m a tremendous Michelle Pfeiffer fan.  Never imagined ever getting a chance to work with her.  Needless to say, to play 30 years younger…that was great.

On Ant-man and the Wasp’s Quantum Everything

Yes, when you see the film, the word Quantum is definitely the most popular word in the movie.  Michael Douglas had a bit of humor to how he dealt with reciting the scientific parts of the film.

“I can’t tell you that I graduated in quantum mechanics University.  But it’s fun.” 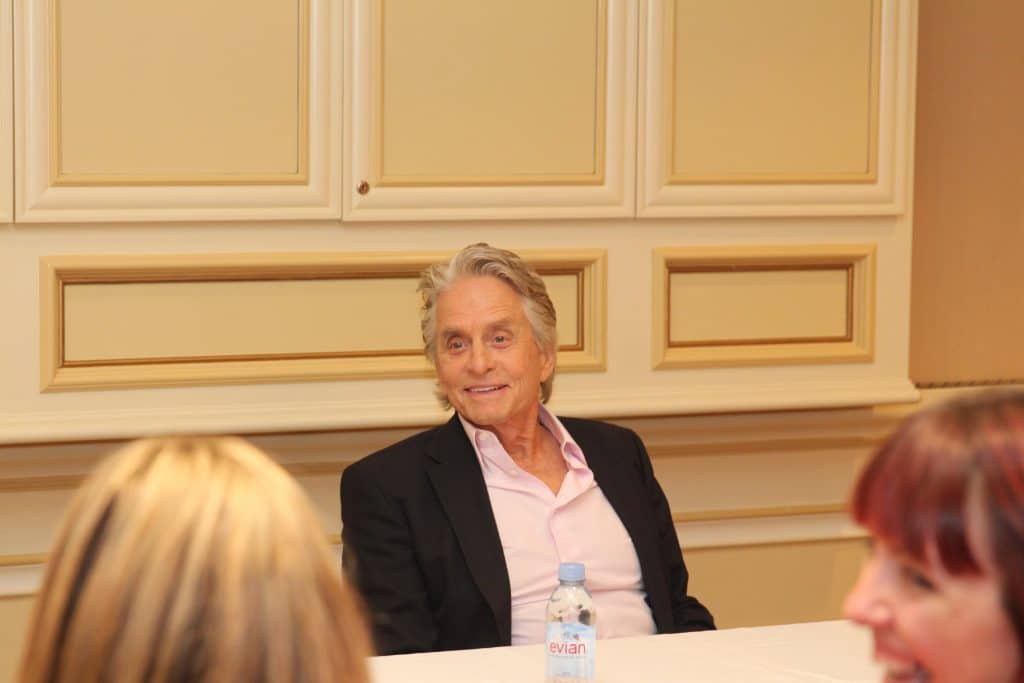 On reaching a new generation of Michael Douglas fans

We learned that Michael Douglas’ son, who is also an actor, was about 15 at the time of the first Ant-man. When he walked out of the film, he told his dad, “This is going to be good for you. This is going to bring a new audience for you.”  And the kid was right!

Michael tells us he’s never anticipated any of this.

“I’ll be talking sometimes and feel something pulling on my coat…and I’ll look down and there will be a little five-year-old kid going ANT-MAN!”

Will we see Michael Douglas in the next Avenger’s film?

I swear to you guys, we’ve tried to get the spoilers, but apparently, Marvel has blow-darts ready to fire on any cast member who reveals the secret!  (I’m kidding, I think…).

Right now we can only hope, I guess. Although, once you see the film…Oops, can’t say any more in case that blow-dart applies to bloggers too.  ?

Check out my review of Marvel Studios’ ANT-MAN AND THE WASP – now playing in theaters everywhere!

5 interesting facts about Laurence Fishburne and his role as Bill Foster in Ant-Man and the Wasp
On location with the cast of ABC’s The Rookie
5 Unconventional Rules For Lounging Like A Princess
The New Jurassic Quest Drive Thru Dinosaur Adventure - Here's what you should know!

« Do you have a Family Emergency Plan? Simple Steps to Prepare for Natural Disasters
The Girlfriend’s Guide to Car Buying With Confidence @Autotrader #ConfidenceinCarBuying »