Remember what seems like ages ago, when we didn’t have devices to live on and had to rely on cards, board games, outdoor fun and other classic games to keep us entertained? Those old school games for kids bring me back to summers at my grandmother’s house. My cousins and I used to spend hours upon hours playing each of these old school games to pass the time. And you know what? Those still remain some of the most memorable times of my entire life!

If there’s one bright side to being quarantined at home with my family, it’s the family bonding that’s taking place each day. It’s like I shared in my post about “Things that Are Not Canceled Due to Coronavirus,” we still have family dinners, movie nights, game nights, laughter and creating memories. I saw something on Facebook about how even though some of us parents might feel some stress over our adjusted work schedules, virtual learning duties, etc., there’s a good chance our kids will see these as some of the most memorable times of their lives.

So far, our game nights have been some of the most memorable for us. I take on the challenge of prying my kids away from their devices and try to introduce some new games each time. Well, new to them at least. Here are some of my top choices for old school games to teach your kids during the quarantine! 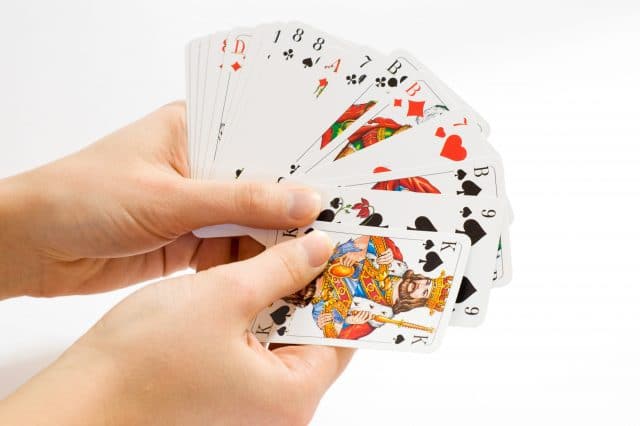 Or as my cousins and I still call it, “I De – Clare War.” I actually taught them this one during our Chattanooga day trip and it remains one of their favorite old school card games.  It’s a great card game for all ages and a really easy game to teach kids.

See: How to play War 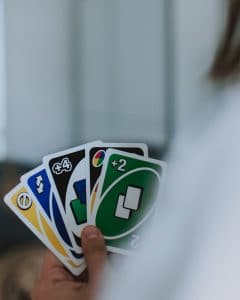 Uno is another perfect card game for the whole family.  I’d share the rules with you all, but as a lot of us found out a little while ago, we’ve all been playing this old school game wrong for decades!  Nonetheless, it’s still a ton of fun.  Here’s a link for the Uno deck if you don’t already have one.

To be honest, I haven’t played Go Fish in many years, but as I recall, this may have been the first card game I learned as a child.  For a game refresher, here’s a guide to how to play Go Fish.

Not to be confused with Gin Rummy, which, I guess could be a fun old school game to teach your kids too.  But Rummy 500 remains one of my husband’s and my favorite old school card games to this day.  We play it all the time – and are super competitive. We’ll definitely be teaching the kids this game soon and will have to try to be less competitive during the family game.

I’d almost forgotten all about until I was reminded about the 2 old school card games that had my cousins and I on the edge of our seats.  Speed and Spit.  They are both 2 player card games; super fast paced and always ended in an all out riot, but lots of fun.

How to Play Speed

The classic one handed card game is not quite as popular, but I loved it as a kid.  Check out this post to learn how to play Spit.

Classic Board Games for the Whole Family 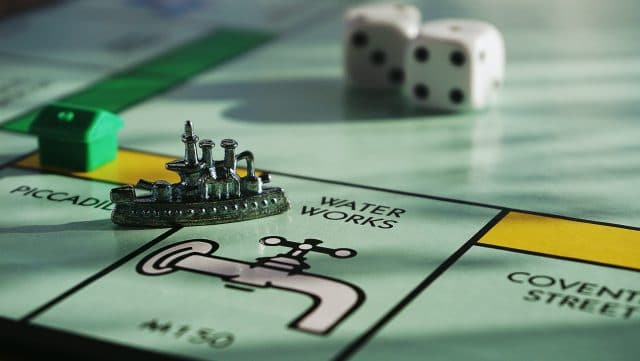 Board games are always a lot of fun for the whole family.  Our family favorite happens to be Monopoly.  The game can go on for hours, or even days at time.  And, like any family, we hold some truths to be self evident.

2. My husband won’t trade with anybody. I mean no one!

3. Leila will try to flip the board over if she loses. and

4. Samara is not to have the bank next to her again. haha

Here are some other old school board games we love and links to find them online:

Battleship – haven’t played in years, but this brings me back to summer camp for some reason.

Chinese Checkers – Another game I haven’t played in years, but definitely one of the old school games to teach the kids now that we have the time to do so.

Chess – of course, this is ideal for older kids, but definitely a game I think every child should learn

Dominoes  – I actually didn’t learn to play dominoes until I was an adult, but I love the game and certainly think it’s an easy old school game to teach the kids.

In, out, side, side, on, in, out.  Yes, over 30 years later, I still remember Chinese Jump Rope and how to play.  This was a classic recess game that we’d play for as long as we could.  The game was simple, but you would need at least 3 people.  2 to hold the rope around their legs and of course, one jumper.  The jumper has to complete the set ( jumping inside the rope, straddled outside of the rope, side, side, on the rope, in, out) on the rope without messing up.  Each time the jumper completes this, the other 2 holding the rope, move it from their ankles, to their knees and then their hips.  As the game progresses,  the other players can widen the space or place the rope on one foot. 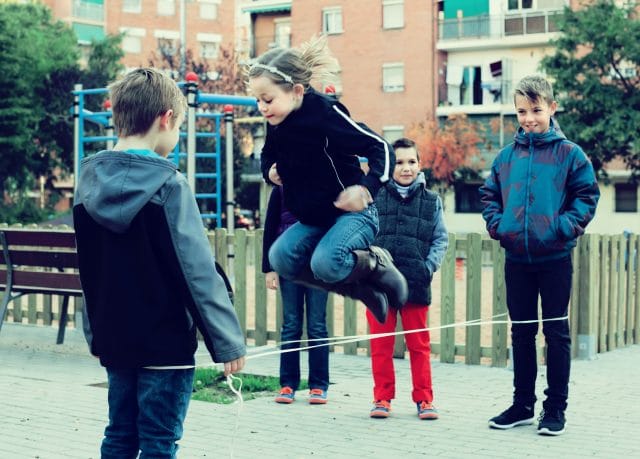 Note: you will need an elastic rope like this one for Chinese jump rope.

Another one of my favorite old school games to teach the kids.  Again you need at least 3 people, although in times of boredom, I’ve played with just 2.

I recall this game being played very similar to Red Light, Green Light as far as the set up and the goal being to reach the post first.  The difference was that instead of there being a spinning traffic light, it was a person designated to be the “mother” or “captain” if not a female.  Rather than run, the players ask for permission to move however many steps further by asking something like, “Mother, may I take 3 steps forward?”  They are either told, “Yes, you may.” or “No, you may not.”

There are, however, other variations of this game found in this Wiki How-To post.

A truly classic old school game to teach the kids, if they haven’t learned yet.  Set up is easy with some chalk and a driveway.

Ok, I’m not entirely sure of what this game is called, but it’s a really fun old school game I’ve taught my kids and their friends.  Note, this is not the classic alphabet game, but a little similar in its premise.  Here’s how to play the letter game:

On a sheet of paper, each player creates 5 columns at the top of the page.

One player at a time selects a letter and each person has to write an answer that starts with that letter for each of those categories.

At the end of the game, the player with most points wins.

Definitely keeps everyone on their toes! 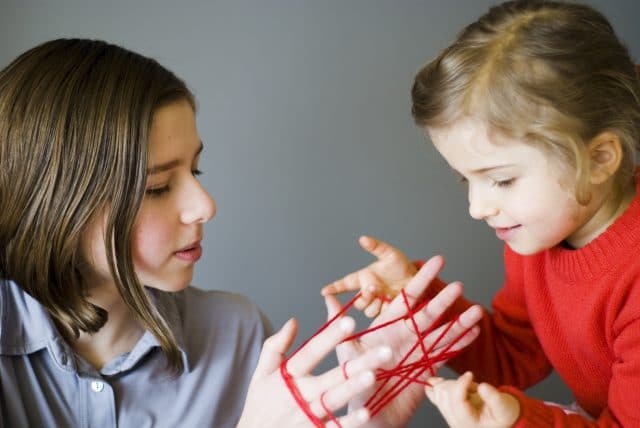 Do you remember this game?  This was another I could not remember the name of, but it’s definitely an old school game kids would really enjoy.  All you need are 2 players and some yarn, string or whatever  else you can tie together.  Here’s a video tutorial for how to play Cat’s Cradle.

Concentration (the clapping game, not the card game)

Last, but not least, there’s the game concentration I played as a kid pretty often.  I could never forget the name because it started with, “Concentration…are you ready? If so, let’s go!”

I hope you enjoyed this list of old school games to teach the kids during this quarantine.  If there are any more I’ve missed and you’d like to see added, share in the comments below!

Looking for some more activities to keep the kids busy? Check out these fun Disney Printables with FREE activity sheets, coloring pages and more!

Also, you’ll love these strategic games for kids by Gigamic! 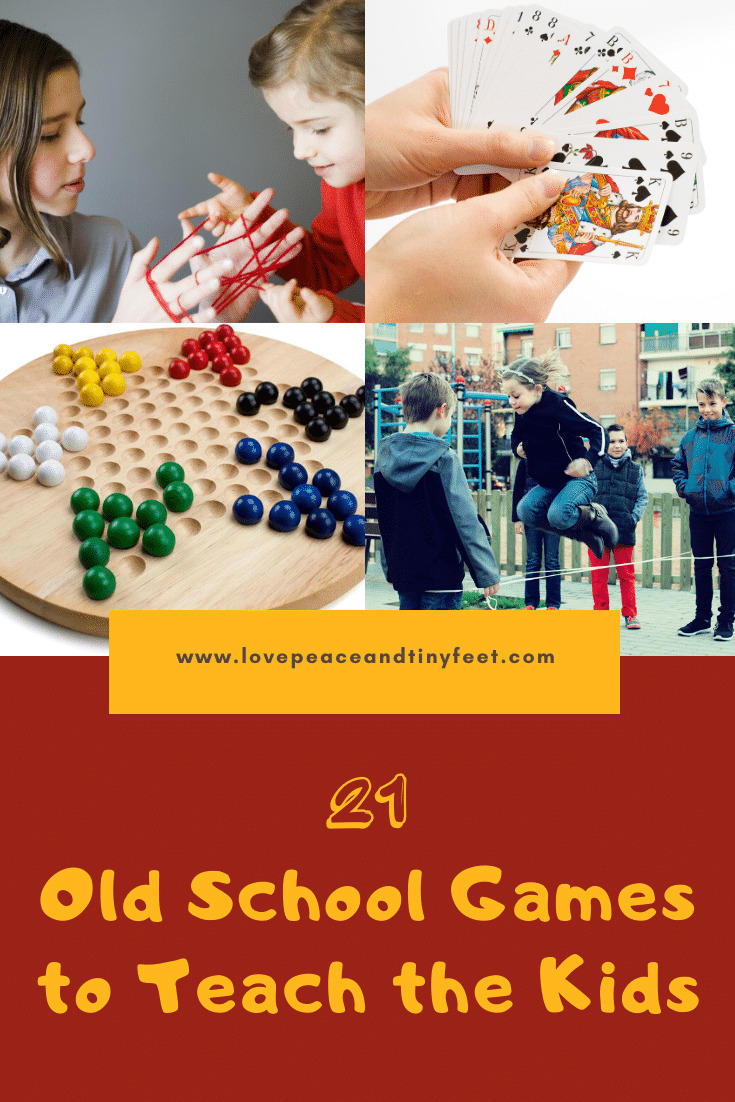