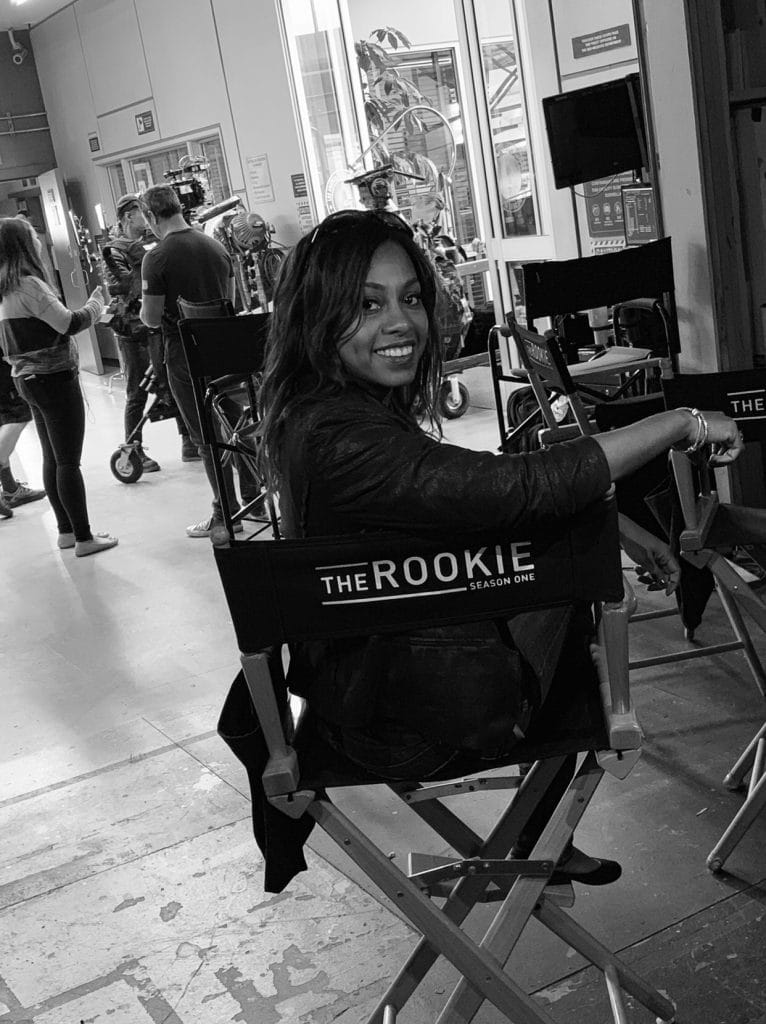 A few weeks ago we got to visit the actual filming location of the Rookie on ABC and got one of the most fun set tours. If you’ve been watching The Rookie on ABC you know it’s a pretty action packed drama, but I have to say, the cast members we got to hang out with during our set visit were so fun and down to earth. You can tell they all have a great chemistry off camera. 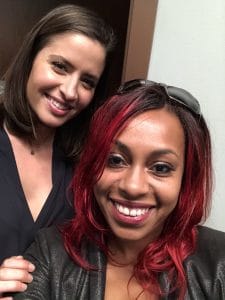 Mercedes Mason, who plays “Zoe Andersen,” was our most gracious tour guide on set of “The Rookie.” You may know here from her previous role on AMC’s hit show “Fear the Walking Dead” or her recurring roles appearing in “Californication,” opposite David Duchovny, “Anger Management,” opposite Charlie Sheen and in “NCIS: Los Angeles.”

She gave us a full tour of the set of The Rookie and filled us in on everything from inside jokes between the cast, embarrassing nicknames they have for each other and more funny tidbits they share around the set when they’re not filming. 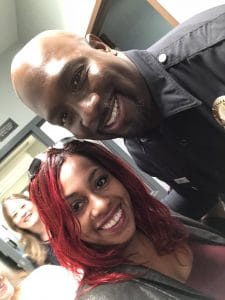 Our next celebrity sightings on the site of the Rookie were of Richard T. Jones and Afton Williamson in full uniform! Richard T. Jones plays the role of Sergeant Wade Grey in The Rookie. You may also know him from his long body of work, including Rick Famuyiwa’s “The Wood,” Tyler Perry’s “Why Did I Get Married?” & “Why Did I Get Married Too?,” Dax Shepard’s “CHIPS;” as well as his television roles on “Judging Amy,” “The Santa Clarita Diet,” “American Horror Story: Hotel,” “Hawaii Five-O,” “Nikita,” “Girlfriends” and many, many more! 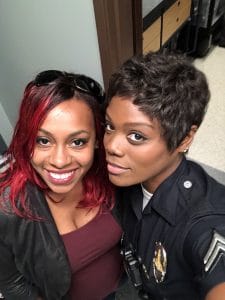 Afton Williamson plays Talia Bishop on “The Rookie,” opposite Nathan Fillion. Her career extends from television to Broadway and you may recognize her from VH1’s “The Breaks,” HBO’s “The Night Of,” Cinemax’s “Banshee,” Showtime’s “Homeland” and NBC’s “Shades of Blue.” Can I also add that she takes the best selfies!

Finally, just as we were wrapping up our tour of the set of The Rookie, we ran into none other than Nathan Fillion, who of course stars in “The Rookie” as John Nolan. It was an unexpected surprise because the studio told us he was not on schedule to shoot that day. The meeting was pretty brief, but he did take the time to get us all in for one of the most awesome group selfies! 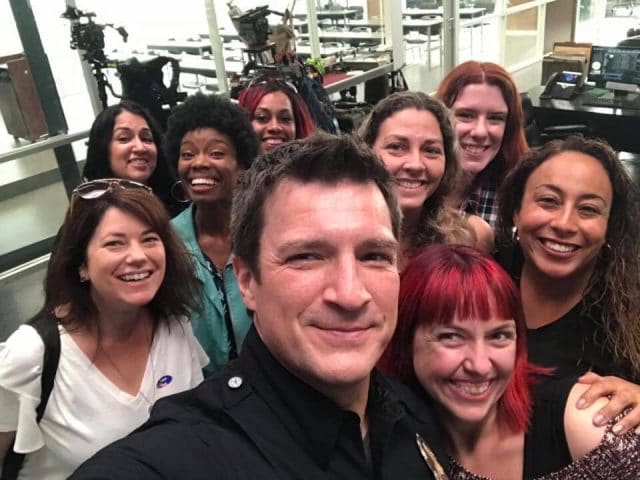 When Nathan Fillion stages an “us-sie”

Nathan Fillion has also had such an extensive career, from his staring role in the award winning ABC series “Castle,” to recurring role in the final season of “Buffy the Vampire Slayer,” to multiple television credits including roles on “Modern Family” (ABC), “Santa Clarita Diet” (Netflix), “The Big Bang Theory” (CBS), “Community” (NBC), “Desperate Housewives” (ABC), “Two Guys and a Girl” (ABC), “One Life to Live” (ABC, Hulu) and many more! 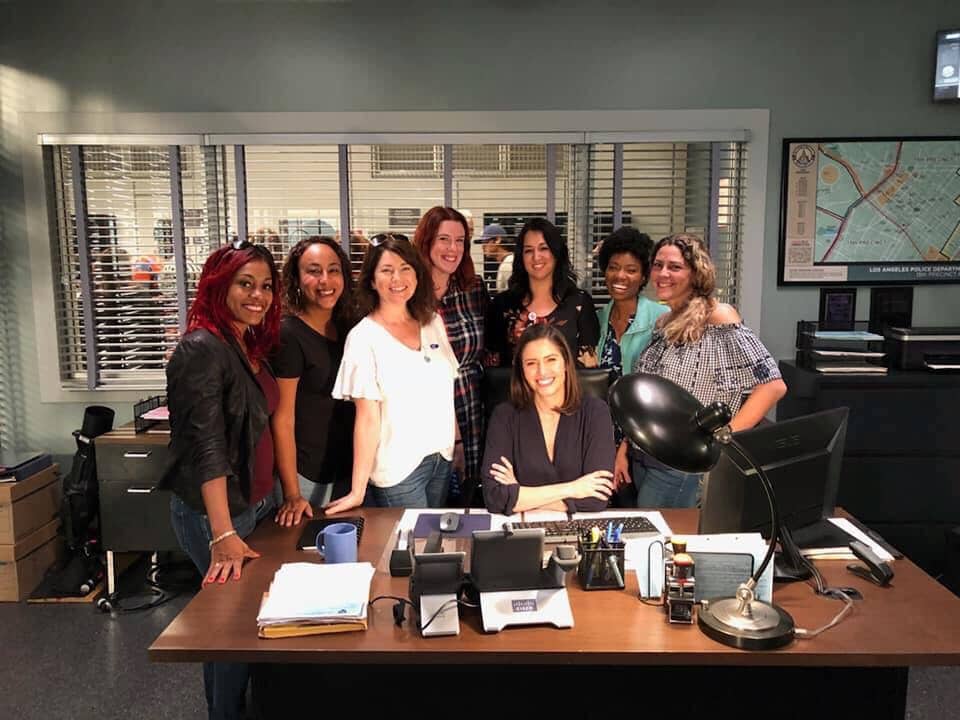 Be sure to check out ABC’s “The Rookie” for an all new episode tonight at 10:00-11:00 p.m. EST on The ABC Television Network, streaming and on demand.

Tonight ‘s episode:“The Hawke” – Nolan and the team must help capture a cop and his former mentor from the
academy after he becomes a fugitive following an assault. Meanwhile, Officer Tim Bradford
needs Officer Lucy Chen to learn to predict the moves of criminals in order to capture them.
Guest starring is Danny Nucci as Detective Sanford Motta, Ryan Michelle Bathe as Detective
Jennifer Paige and Shawn Christian as Jeremy Hawke.

My Dolby Cinema Viewing Experience and Moana Review
Daniel Kaluuya and Letitia Wright talk Black Panther, the Black Experience and the Impact on Girls A...
The New Jurassic Quest Drive Thru Dinosaur Adventure - Here's what you should know!
My girls got a message from Pumbaa from The Lion King!

« Our Favorite Family Thanksgiving Game | Ways To Show Kids To Give Thanks
Be Brave, Bold & Fearless with the timeless Cora Koa Rose Gold Jord Watch »