in the film, but she was the driving force behind the idea of bringing all of the Disney princesses together for Ralph Breaks the Internet.

One of the things that makes Ralph Breaks the Internet really special is the fact that we get to see all of the Disney Princesses together in one place, on one big screen.  In particular, we finally see them not only in their full-on Disney princess glory, but we get a fun sneak peek into what we could only imagine the princesses would be like… lets say, off the clock.  The result is some hilarious footage, storylines and the Disney Princess message and narrative girls everywhere have been waiting for!

We had a chance to sit down with Ralph Breaks the Internet co-writer Pamela Ribon for a really fun and informative chat about Disney Princess stereotypes, her beloved Vanellope and how the Disney Princesses came to be a part of this project.

“I love seeing the princesses ‘off -duty,’ relaxed and cozy in way we’ve never pictured them before. It gives us a deeper glimpse into their lives and a peek behind the curtain.” —Mandy Moore, voice of #Rapunzel, #Tangled…

“My favorite part is the fun, tongue-in-cheek insider humor. It’s really funny but in a respectful, loving way. I think it walks a perfect line.” —Paige O’Hara, voice of Belle, #BeautyandtheBeast #RalphBreaksTheInternetEvent

Let’s face it, there are several really common stereotypes you’ll find among Disney Princesses in almost every Disney Film.  Ralph Breaks the Internet, in one scene, points them all out for us.  The princesses are quiet, obedient, and singing about when their prince will come and take them away. The princes fight dragons and wake their true loves from enchanted slumbers with kisses.  From the different family structures (i.e. no mothers) to the idea of a big strong man they wait to save them, it’s covered in Ralph Breaks the Internet. The only difference is that this is a movie where you get to see each of the Disney Princesses take on an amazing adventure, not for love or even her family. Rather, just because they are all awesome and amazingly powerful in their own right!

“Over the years, I have had the pleasure of meeting and making friendships with many of the legendary princesses! It has been a blessing to be a part of such a beautiful sisterhood of such strong, intelligent women.” —Irene Bedard, #Pocahontas…

“I am a girl who lives for both the exquisite and the cozy. I feel no need to choose except to decide which moment calls for which.” —Anika Noni Rose, voice of Tiana, “The Princess and the Frog” #RalphBreaksTheInternetEvent

Vanellope as a Disney Princess

When we sat with Pamela Ribon, one thing she shared with us was the fact that her idea of bringing all of the Disney Princesses together for this Wreck It Ralph Sequel, Ralph Breaks the Internet has been a passion in the making for many years.  However, her motivation for bringing this to life was actually out of loyalty to one particular character – Vanellope Von Schweetz.  According to Pamela,

“Vanellope is technically a princess, but hasn’t really been included among Disney royalty. Who wouldn’t want the Hoodie Princess in there? That’s my princess! I loved the idea of getting her into that club.”

Pamela Ribon Brings the Ralph Breaks The Internet Princesses Together

In Ralph Breaks the Internet, all of the princesses come together with all of their tropes into a hilarious dialogue that both celebrated and poked fun at the iconic characters. For example, “Which one of you were kidnapped? Poisoned? Cursed?”  Ironically, very appropriate questions for a Disney Princess!

“The inside jokes and the affectionate nods to the princesses’ original stories make me laugh every time.” —Linda Larkin, voice of Princess Jasmine, #Aladdin #RalphBreakstheInternetEvent 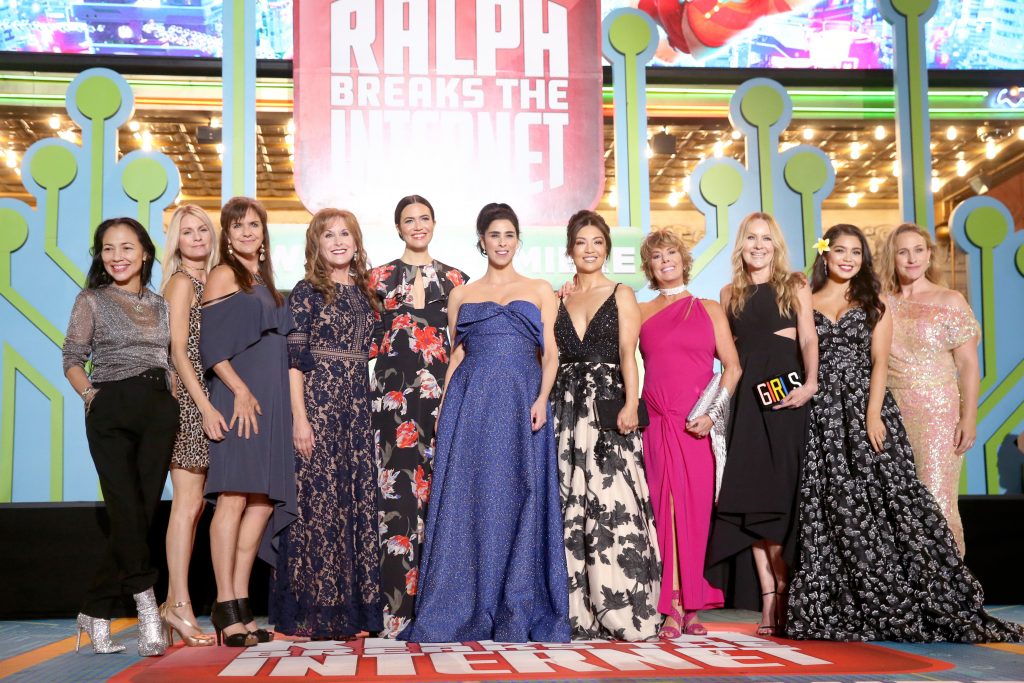 All of the Disney Princesses come together at the Ralph Breaks the Internet Premiere.

Again, most of the voices of the original Disney Princesses come together to voice the Ralph Breaks the Internet Princesses with Pamela Ribon voicing Snow White.

Audiences will get to see it all come to life this week (Nov. 21st) in Ralph Breaks the Internet!  Check out this trailer below:

“When have all of the Disney princesses been together in one room? I don’t know if it gets better than that.” —Idina Menzel, voice of Elsa, #Frozen #RalphBreaksTheInternetEvent

Why I am no longer teaching my kids to share
Summer Planning Series – 8 Things to do before school starts
The Season's Hottest Toys from Ralph Breaks the Internet & Giveaway!
2 Millennials, a Ford Escape and the adventure of a lifetime! #journeyxjourney by @CocaCola