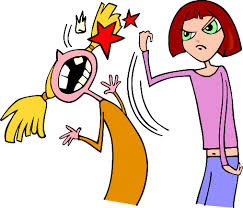 It took a great deal out of me to not label this post just a little differently, but I really needed a few days to process and plan out what exactly I was going to write.   The other day marked a pivotal moment of sibling rivalry in our household – the anger extended to not only the siblings, but my husband and me as well.  I witnessed possibly the most disgusting act of sibling rivalry as acted out by a 2 year old and I wanted to scream, “What an a** h***!” but I refrained.  Here’s what happened:

It was pizza night.  (Really, it was just like a Thursday that I didn’t feel like cooking).  Before long, there was one slice left.  And it was Leila’s.   Leila walked away from the table as she always does depending on what else there is to distract her from dinner.  Next thing she knows, her pizza is gone.  Now Samara has it.  Leila, the reactionary one, starts whining and telling Samara to give it back to her.  Samara starts laughing and running throughout the house with the pizza leaving Leila to chase after her.  And then the real crying began.

Now, at first that might sound pretty amusing.  I posted it on Facebook and the majority of my friends lol’d.  But IT IS NOT FUNNY, IT’S MEAN!  It’s a total a** h*** move to pull.   I was not happy. I was so disappointed.  And Samara knew it!  I’d experienced something like that when I was younger with an older kid who was the daughter of my mom’s friend.  She had popcorn; I asked her for some and she said no.   A few minutes later, she threw the half eaten bag of popcorn into the trash rather than offering me any.  My wound has since closed from that and I barely remembered it until my mother brought it up.  I hated that girl for years for not only that situation, but for just being a mean girl.  Thinking back, she probably wasn’t too fond of me either.  She probably thought I was a spoiled little wannabe princess who everybody dropped everything to make sure was always happy…as I was.  And if I’m being honest, Leila might be a lot like me.  There’s no doubt that Leila is the squeaky wheel in the household.  And we’ve been guilty of dropping everything to essentially do whatever we had to do to get her to be quiet!  Samara has been the easy going one…who understands the words “wait a minute” and will quicker figure things out on her own than to wait for one of us to get to her.   Samara learned to hold her own bottle simply because of the fact that I constantly had to pause her feedings to go wipe Leila’s butt as she was potty training.  With that said, I had to wonder if there actually was another motive behind the action.

It’s a really tough line to draw with Samara because she’s old enough to pretty much know right from wrong, but she’s not old enough to know the degrees of wrong.  I’d like to think she knew without a doubt that taking the pizza was wrong, but I can maybe blame that on her mischievous side and possibly her subconscious desire to just watch her sister not get what she wants for once.  But throwing it in the toilet said, “If I can’t have it, no one will!” and that’s where playful becomes just plain mean.

But my daughter is not an a** h*** and I was (and still am) determined to figure this out.