You know that Progressive commercial where Flo is giving a pep talk to a rookie colleague who appears to have lost a customer to a lower price plan? It has this totally retro feel, taking you back to like a 1980s after school special.  The colleague is all bummed in the locker room and Flo comes in to cheer him up a little.  She reminds him that “You can’t win ’em all” and reminds him of what’s important.  He starts to feel better and she offers to take him out for an ice cream cone.  He gets a little too excited and asks, “with sprinkles?” to which Flo puts him back in check with the stern reply, “Sprinkles are for winners.”  It’s hilarious!  Besides being utterly comical, it’s so relevant. 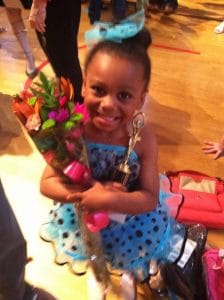 I was never actually much of an athlete growing up, but I did ballet my entire childhood. I recall waiting for years and years before I was promoted to pointe and given my very first trophy. My older brother was always a star player and had a ton of trophies on the mantle, but I felt such a sense of pride when I received my hard earned trophy.  I still have that trophy.

Imagine my surprise when Leila completed her first year of ballet and at the end of her recital, each and every child received a ballet trophy!  The star performers, the ones who cried off the stage, the ones who could care less if they followed the routine – every kid gets a trophy!

I told my husband, “That’s not fair!”  Of course Leila was thrilled about her trophy, but guess what, we now have 3 of them and she’s still not a star performer!  What’s more is that if or when she ever reaches that status, what would be her monumental symbol to celebrate her success? I know she works hard each year in dance, learns her routine and such, and for that we celebrate her.  She gets flowers and dinner following her recital and she sees that we are proud of her.  But trophies are for winners!

I can imagine this was the thought process behind James Harrison stripping his sons of their trophies.  For those who are unfamiliar, Pittsburgh Steelers linebacker James Harrison recently wrote an Instagram post where he revealed that he took back his kids’ “participation” trophies because they hadn’t earned them.  His stance was that his sons, ages 8 and 6, “would get real trophies when they won real championships.” His exact words were as follows:

I came home to find out that my boys received two trophies for nothing, participation trophies! While I am very proud of my boys for everything they do and will encourage them till the day I die, these trophies will be given back until they EARN a real trophy. I’m sorry I’m not sorry for believing that everything in life should be earned and I’m not about to raise two boys to be men by making them believe that they are entitled to something just because they tried their best…cause sometimes your best is not enough, and that should drive you to want to do better…not cry and whine until somebody gives you something to shut u up and keep you happy. 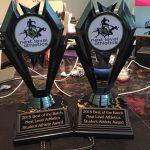 Of course, this gesture was met with very mixed reactions.  Some people and parents were completely in uproar, while other parents, like myself, applaud him for taking a stand on how he wanted his children to be raised and the values set within his household.

I agree that, in recent years, the emphasis has been on making every child feel good, rather than really preparing them for the real world.  In the real world, sometimes you win and sometimes you lose.  And that’s ok!!!  You are not always the star player…AND THAT’S OK!!!  And if you are a star player, you deserve to be celebrated because you’ve done something others have not and you then learn how to accept your win with humility and grace.  It is just as important to teach them how to both win and lose gracefully.   In the workforce, for example, you don’t just show up every day and get a promotion.   Promotions go to the employees who go above and beyond just showing up.  I’ve seen it many times with the younger generations just not getting that concept.  Not to mention those who get promoted and become complete jerks – that is an example of a sore winner.

The other day I was listening to a local Atlanta morning show, The Bert Show, and I loved that they brought a completely new perspective on the topic. They were taking call-ins from young people who shared their reactions to this. In one high school, the issue was that they were no longer recognizing honor roll students, again, so that the other kids wouldn’t feel bad.   Some of the junior callers were the overachievers who felt slighted at the fact that they’d worked so hard and would not be recognized. Others were those who recognize that they were not the best, but still feel like it’s unfair to those who worked a little harder.  You can hear the full segment HERE.

I mean, I get it…As parents, we want our children to feel special and wonderful and equal.   Here’s the thing – we can still show our children that we proud of them and that they have indeed accomplished something, without giving them a false sense of reality.  We’re underestimating what they handle and rather than coach them through the tough life experiences, we’re avoiding them altogether.

As for me, I don’t know how I will react once my girls get involved with sports and the whole “every kid gets a trophy” thing, but I fully applaud and support James Harrison and other parents who are determined to enforce the values they see fit for their children even if it means going against the grain.

And now, just for kicks…