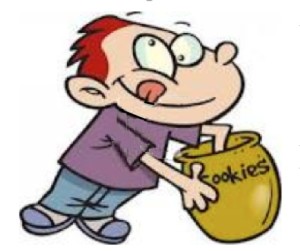 The other day I shared about our trip to the Center for Puppetry Arts, but there was one part I left out to the story.

We’d been rushing around that entire morning (surprise, surprise) and I completely neglected to get them lunch before the show.  I figured I’d just grab a bag of chips for them to snack on in the theater until after the show.  Well…we are seated in the theater and the announcement is made that – wait for it – “Food and drinks are not permitted in the theater.”  A very honest confession – I paid it no mind.  In fact, I think we’d had pretzels in there last time and the kids proved that they could snack without making a mess and I was down to repeat that.  That’s just the rebel in me I guess.

Well, Leila is not a rebel.  She refused to break the rules.  She turned to me and said, “Mommy, the lady said we can’t eat in here. Can we go eat.”  Of course, I didn’t want us to have to leave the show, so I told her it was ok to snack on the chips.  She was adamant about the fact that we were told not to and as much as I tried to tell her it was ok, she actually insisted that I ask the girl working in the theater if she could make an exception.   We ended up having to leave the theater for a few minutes, so she could eat her chips in the hallway.  Really!

That’s very much how Leila is – she plays by the rules.  She does what she’s told. She takes pride in being the best behaved and making her teachers proud.   Samara, on the other hand, is very much the opposite.  She will (unfortunately) gladly break the rules.  While Leila is busy and annoying seeking and begging for  permission to eat a cookie out of the jar, Samara is already chomping on the last cookie.  I shared this observation with some coworkers of mine and they quickly remarked, “Samara is going to be the one to make history one day.”

It dawned on me that the most powerful people in history are those who are simply not afraid to break the rules.  They challenge the system and piss a lot of people off, but they somehow end up on top.  While I know that is a characteristic that is largely just present at birth, I wonder if some of it is somehow learned  behavior.  We find ourselves telling our children, “Be a good girl,” “Behave yourself,” “Listen to your elders,” etc – all with good intention.  After all, we don’t want to actively raise kids to get suspended from school or even potentially get in bigger trouble as teens.  But how do you allow room for just a little rebellion?

So what do you guys think – should you actually encourage or teach your  kids to break the rules?  If so, how do you do it?

Style Box, Savings, and Social Good – This is how we #UnpackHappy!
5 things from my childhood I insist that my kids experience
Tis the Season for Style, Smiles and Sister Love! Plus a $50 Giveaway! #HolidayChill
Why my kids live for casual Fridays at school

« “My friend has two mommies” – How to talk to your kids about same sex marriages
Benefits of Infant Chiropractic: Is Chiropractic Care Safe for Babies and Infants? »