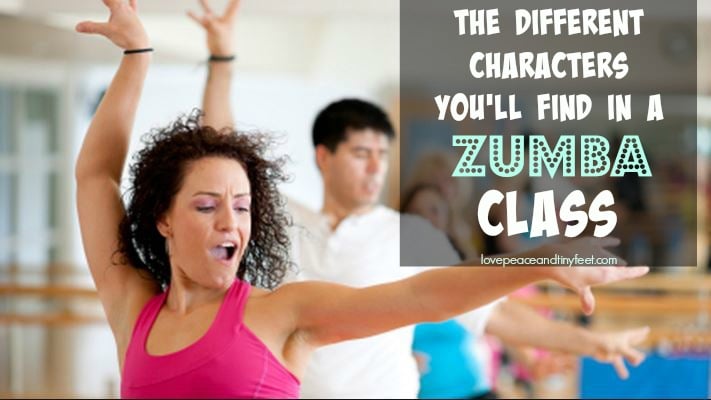 I could probably write a whole book about the different characters in a Zumba class, but I’ll just start with this post.

As most of my close friends and family know, I’ve become a little bit of a Zumba addict in recent years. Like, I attend a bunch of different ones, at different gyms, and even if I’m traveling, I have to get a temporary membership to a local gym that offers a Zumba class. I do other activities at the gym too, such as kickboxing, but a good Zumba class will take me to my happy place every time.

In almost every single Zumba class I’ve attended, I’ve noticed a trend of the same different characters. I don’t know which one of these I fall into, but take a look at this list and tell me if any of these seem familiar to you.

This is the girl you swear is trying out for her own fitness video. She’s uber high energy, staring in the mirror, throwing in extra steps that even the instructor doesn’t know, and just overall – doing THE MOST. She does get the best workout in the class, though.

This is the girl who more than likely has never taken a formal dance class in her entire life because she clearly does not know what it means to stay on your X. She starts out standing too close to you and knowing that you’re going to want to swing an arm or two, you politely move over – only to find her back under your armpit 2 minutes into a routine. I get it…sometimes a Zumba class gets pretty crowded, but there’s no reason for us to be nearly dirty dancing after every turn. In fact, an actual quote from the movie Dirty Dancing is appropriate here – “This is my dance space. This is your dance space. I don’t go into yours, you don’t go into mine!”

The Girl Who Is Clearly Dancing To Another Song

I think it’s mean to say that someone has absolutely no rhythm, so we’ll just say she’s dancing to another song…in her head…while making up her own dance moves….that don’t actually exist. You get the point. You have to purposely avoid looking at her during Zumba class to keep from getting off beat too. However, you respect her for bravely sticking through the class and showing that it’s all about having fun.

Not be confused with the Performer, this girl is not about doing all of the moves perfectly. Rather, she is the one who has made it her personal mission to keep the Zumba class hyped up and energetic. She is fun and outgoing with loud bursts of “Yeah,” “Uh huh,” Get it, girl,” and “Owww” sounds throughout every routine. She keeps you motivated and dancing harder than ever, and let’s face it, who doesn’t need a hype girl in their life?

This girl could take or leave the actual cardio aspect of the class, but she absolutely nails every hip roll, gyration, or booty shake. There’s a part of you that wants to be catty and remind her that this is not a pole dancing class, but that’s really just the same part of you that’s secretly wondering how great her sex life must be.

The Girl That Didn’t Realize This Was A Cardio Class

Now, this could be the Sexy Seductress, but it could also be the girl who’s a little out of shape and thought a Zumba class was not going to be a real workout. 5 minutes into the class, she’s complaining about how hard it is and asking the instructor to take it easier on the class. You feel her pain because you haven’t always been in such great shape, but you’re also annoyed because you’re there to work. So, when she packs up and leaves halfway through the class, you feel relieved that you’re finally gonna break a sweat.

You still haven’t figured out this guy’s deal. He’s the only guy in the Zumba class, he doesn’t actually know anyone there, but he does most of the steps except for the sexy ones. You wonder if he’s just a guy trying to get in shape or if he’s there to pick up girls. Only time will tell.

There you have the different characters in a Zumba class. Can you think of any that I’ve missed? Share them below and I’ll include in the post!

Duty, Diligence, and Doubt: An update on our guitar lessons at Guitar Center:
The 3 most dreaded words on Christmas morning #StillGoing
The Perfect Spa Party for Kids at Dazzling Diva Day Spa
CRUCIAL TIPS Before Trying This Homemade Deck Cleaner Recipe