Last week I had a chance to preview the all new ABC Network show, The Toy Box,  and immediately knew this would become my newest Friday night obsession!  I sat in the theater viewing the premiere episode (coming on tonight) and literally laughed myself to tears, had almost every heart string pulled and left feeling so inspired to create something great. 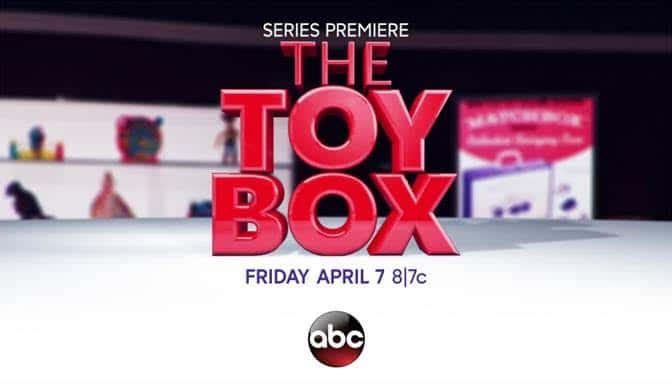 The best way I can describe this show is to tell you it’s like the show “Shark Tank” meets “Kids Say the Darnedest Things.” The premise of the show is similar to Shark Tank in the sense that aspiring entrepreneurs present their concepts and products to a panel of judges to compete for the chance to bring their ideas to market. However, where it differs is where all of the heart and entertainment is filled in. These entrepreneurs are actually toy designers, presenting their most creative children’s toy ideas to judges for a the ultimate prize – bringing their toy concept to life with industry-giant Mattel and to the shelves of Toys ”R” Us as soon as the day after the series finale.

Now, here’s the really fun part, after an initial screening process by Toy experts, these toy designer hopefuls face the toughest judges of all! Check them out here:

These young, no-holds-barred judges include Sophia Grace Brownlee (“The Ellen Degeneres Show”), Aalyrah Caldwell (“Uncle Buck”), Toby Grey (“The Unexpected John Cena Prank”) and Noah Ritter (“The Ellen Degeneres Show”).  After unlimited laughs and entertainment, these judges ultimately decide which toy moves on to the finals. My daughters are such fans of Sophia Grace and are so excited to see her on the show.  I know they’ll love the rest of the kids too because they are all so stinkin’ adorable!

It’s one thing to see a room of corporate execs come up with a toy concept and push it forward through assembly. It’s another thing to see just ordinary people come up with an idea, pour their heart and life savings into it and hope their dreams come true. These toy designers had such heartwarming stories, including one designer who had been working on her idea for over 30 years. You can’t help but cheer these designers on, even though at the end, there can only be one winner.

This week’s toy inventions include the following.  Can you predict which one makes it to the next round?

Arya Ball – a reimagining of the soccer ball with special surprises inside
Inventor: Babak from Carlsbad, California

Now, Eric Stonestreet is probably not a stranger to your living rooms if you’re a fan of Modern Family, but I’d have to say he is even more entertaining than ever as host of The Toy Box. His seemingly impromptu comedy, interaction with the guests and organic wit just brings the show to life. I couldn’t imagine a better host for this show!

As I mentioned, the toy experts are there for the initial assessment and trials of the product and I found it pretty interesting to see how they go about determining which toys are suitable and safe enough to even move to the next phase. In a room full of parents, I think we could all easily agree with their decisions. I had a chance to sit with one of the experts, Jen Tan, for a Q&A and learned that she actually studied toy design at the Fashion Institute of Technology and had an extensive career from toy designer to now Creative Director of Consumer Products at Pixar. In regards to some of the things they look for in determining whether a product advances, some of the things she looks for include that the toy allows a child to have a lot of fun and also sparks some creativity and imagination. She also pointed out that one of the best qualities of the toys featured on the show are mostly classic, simple toys, rather than tech-based toys that have become a little repetitive in today’s landscape. What’s also so special about viewing this show as an adult is the fact that we sometimes forget what’s it’s like being a kid and just how to play with toys, which is why seeing how the kids go on to review these toys is an experience in itself.

*In addition to The Toy Box, you’ll get to see more of Jen’s work on the toys coming out for Cars 3 around mid-May*

The Toy Box premieres Friday, April 7th at 8pm Eastern / 7pm Central on ABC. When you check it out, be sure to come back and share your thoughts on the show! I’d love to hear your opinions!

« 5 Things Moms Will Love About Home Chef Meal Delivery Service (plus $30 off!)
Kia partners with LakePoint for the ultimate ride and drive experience! »