I think it’s fair to say that Marvel movie-goers tend to fall into one of 3 categories – 1) viewers who’ve never read the comics, but will join a friend or significant other for the entertainment of it all…and maybe free popcorn. 2. moderate viewers who enjoyed the comics as kids but never quite graduated to full on adult geekdom. 3. Full on marvel extremists who with the cosplay gear, tattoos and possibly a child named Tony Stark to prove it.

To be honest, depending on the Marvel character, I fall into each of those categories. The Thor storyline is one of my personal favorites, but the good news is that Thor: Ragnarok is truly a film that satisfies all of the above! 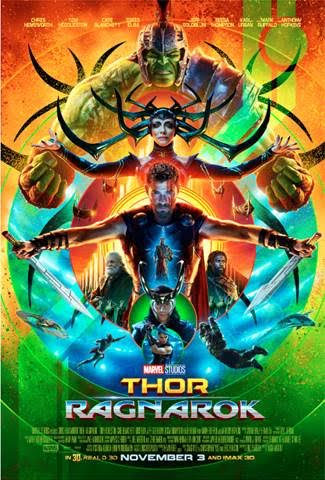 Thor: Ragnarok is the third sequel to 2011’s and 2013’s Thor and this time, is guided by Taika Waititi, starring Chris Hemsworth, Tom Hiddleston, Tessa Thompson, Cate Blanchett, Idris Elba and Jeff Goldblum among others.

So what is the movie all about?

Thor, who is held captive in a different universe without his hammer, must return to Asgard to save it from destruction by Ragnarok and Hela. Before the heroic mission, however, Thor comes face to face with his former friend and fellow Avenger the Incredible Hulk. An epic battle ensues.

Thinking that this is just like any other Thor movie you have watched? I am going to stop you right there. Here are a few more elements of Thor: Ragnarok you can look forward to:

You dive into a 80s fantasy artistic presentation. This 80s feel is perhaps a reflection on how far the marvel enterprise has come. I’ve heard some critics say the movie has leaned too much on fantasy, making it feel like an old video game, but that is just what makes it compelling. The film is undoubtedly funny. Stand out acts include Jeff Goldblum as Grandmaster and Hulk, played by Mark Ruffalo, showing he is much more than the green machine character you have seen in the Avengers.

Thor has a new look

In Thor: Ragnarok , Chris Hemsworth brings out his character in a different light compared to the previous movies. The director tapped into Thor’s comic acts, giving him more interactions with the Hulk.  Not really a spoiler, but you finally get to see him with short hair.

Karl Urban plays the role of Skurge, an Asgardian warrior  that fights alongside Hela, Thor’s newest villian played by Cate Blanchett. Skurge has to work with Hela to survive, even though he knows he is dancing with the devil. In essence, he becomes her henchman, doing every dirty job she asks him to do.

Loki is a bad leader

Loki, played by Tom Hiddleston, is Thor’s adoptive brother and a trickster as always. After the events that transpired in the Avengers, Loki has resorted to narcissism. All he cares about is power and glory, and for a while, he succeeds in becoming the king of Asgard. All the while he remains ignorant to the threats that face Asgard; Ragnarok and Hela.

Rachel House plays Topaz. She is very protective of the Grandmaster. She feels that with the Grandmaster’s power and old age, the only she can calm him down is with her standard miserableness (is that a word?)

Tessa Thompson is the Ultimate Valkyrie

Fans will get a new heroine in Tessa Thompson’s role as Valkyrie.  She throws the audience for a bit of a loop in the beginning, but she totally brings the girl power gold I love to see!

In all, Thor: Ragnarok was a unique, retro and entertaining interpretation of the otherwise mythic avenger.  Check out the trailer below and be sure to see it when it comes to theaters on Nov. 3rd!

Check out all Exclusive Interviews and Footage from our Thor Ragnarok Event:

My Fangirl Moment with "Friend in My Head" Eva Longoria at the Premiere of Dog Days
On location with the cast of ABC’s The Rookie
Queen of Katwe Event and Giveaway
13 Cars 3 Fun Facts to Know Before You See It On BluRay... #Cars3BluRay