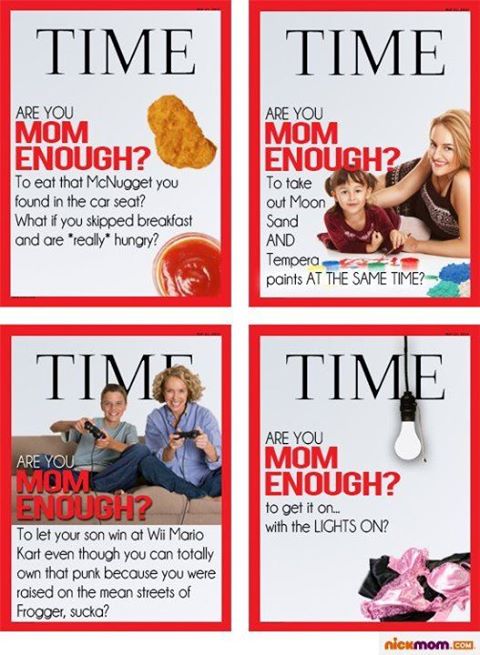 (source: BargainBriana’s FB Page)
I know this is supposed to be WordLESS Wednesday, but this picture – really the picture it originated from which I’m not posting – makes me want to scream a thousand words!  I think this is a great comeback to the question of “Are You Mom Enough.”
Of course, this whole thing is in response to the recent Time Magazine cover featuring a young mom breastfeeding her almost 4 year old son.  If you think about it, it’s not the first time this issue has been discussed pretty heavily.  I recall an old episode of Desperate Housewives where Lynette had a coworker still nursing her 6 y/o which had people talking.  Of course it was hilarious to discover that that mom was only doing it to keep from going to the gym.  This time, however, I think it’s being done just to stir up controversy and sell magazines.  Now, while I’ve made it a personal rule ever since I became a mother to try not to ever judge another woman’s parenting style (unless of course the child is blatantly being harmed), I will say that I was pretty disturbed and annoyed with both the cover itself and the concept behind it. Here’s why:
First of all, the headline, “Are you Mom Enough?”  Umm excuse me?  And what is that supposed to mean?  It’s almost funny because it takes me back to a conversation I had with another mom a long time ago about this imaginary hierarchy amongst mothers:  Breastfeeding mothers think they’re better than formula feeding mothers, and then the mothers who make their baby food think they’re better than the mothers who buy the jars, and then the homeschoolers think they’re better than the moms who send their kids to school, and so on and so forth.  Now it’s a question of how long did you breastfeed – 4 months or 4 years?  It’s annoying and pretentious to me how any of these ideas are supposed to serve as the standard for great parenting.
Personally, I breastfed baby#1 (Leila) and do the same for baby #2(Samara), but I’ll admit it’s for different reasons.  With #1, I completely bought into the idea that breastfeeding was the only way imaginable to have a baby who was smart, healthy and bonded with me.  Yes, my oldest is all of those things, but I’m sure there are other reasons for that.  This time, I think I’m doing it more so just to lose this baby weight and save money.  Don’t judge me!
After I had Leila, I discovered that my mom barely breastfed me or my sister and well, I’d like to think we turned out pretty well too.  I was reminded that there was a time when formula was the hottest thing out there and the notion back then was “shame on you for not wanting to give your child the best!” It was the trend; it was what all of the doctors confirmed and probably magazines and tv too.  And we survived the formula.  The bottom line is that great mothers do what THEY feel is best for their child(ren) and motherhood is not a competitive sport!
Next – and this is where it gets more controversial – I think the image is just plain creepy.  There, I said it!  It’s hard to explain without sounding hypocritical or judgmental, but here’s what I know:
With that said, it’s not the public display of breastfeeding itself (well, actually it is the COVER of a national publication), but mostly, it’s the age of the child that makes it all questionable.  I just don’t see how looking at a grown boy standing on a stool with his mother’s breast in his mouth falls in line with any of the ideals of breastfeeding. The kid in this picture is not bonding with his mother; there’s no holding the child or skin to skin contact. He’s standing up on a chair with a breast in his mouth! I can’t say that there is one particular age to serve as a cutoff, but my general rule is that when a child is able to walk up to you, ask for it by name, unbutton your shirt, and put the breast in his/her mouth, they’re likely too old for it.  I just don’t understand the need to breastfeed for such an extended period of time and I welcome any of my readers to help explain this to me:
If it’s all about the nutrition of breastmilk, why not just express it and feed it in a bottle?  But if it’s still about “bonding,” who’s the more dependent one – the mother or the child?
I know this is one of those touchy topics, but I would love to hear your opinions on this.  All that I ask is that in leaving your comments, please be respectful of others in the discussion.

11 Passive Aggressive Ways to Deal With Wedding Crashers
To hell with the so-called mommy wars…my village is awesome!
Love, Peace, Tiny Feet... and Vision
The biggest lie I keep telling myself