I witnessed the strangest conversation last night with my kids. I was heading out of the house and Samara (my 3 year old) made it a point to come upstairs to me and say,  “Mommy are you going to be OK?”  “Yes, Samara, why do you ask?” She went on to say, “Because you’re going by yourself and what if the “polices” get you?  They are going to be bad to you and they’re going to hurt you because they are bad.”  (On a side note – let me be sure to point out that I am NOT wanted by the police nor do I have any reason to think that the “polices” are looking for me).  Just then, Leila (my 6 year old) jumps in and starts to argue with Samara.  “No Samara, that’s not true! The police aren’t bad! They’re only bad to people when they are being bad!”  The two actually debated for a little while with Samara insisting that the police are bad while Leila would vehemently disagree.

Sad thing is…they’re both not wrong for feeling this. 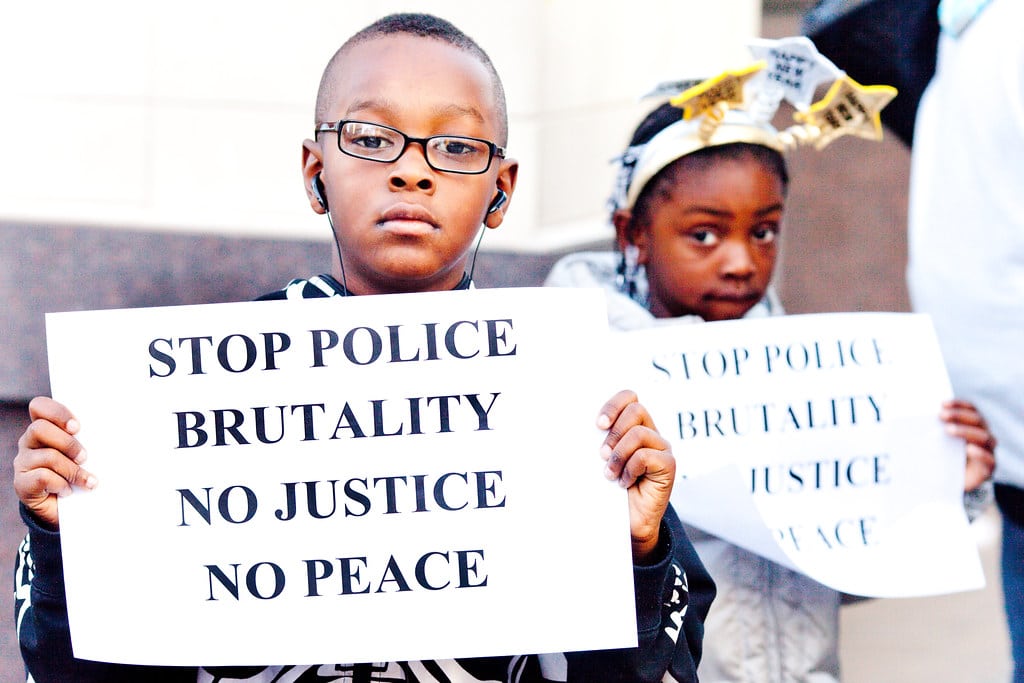 Now here’s the strangest part about it –  we have NEVER talked to our kids about this topic!  Even with all of the recent news stories of unarmed men and women being killed by the police, I honestly don’t recall ever directly talking about the topic around them.  So now would leave me to wonder – what do our kids know about police brutality?

A little known fact is that my stepfather is a former police officer. While I’ve always known him to be really tough and strict,  I’ve never known him to be just pure evil. Much like Leila, I’ve always liked to believe in a very Utopian world where the police are only there to protect us from “bad” people and are not bad themselves.  I like to believe that the people in power wouldn’t abuse it.  I like to believe in the justice system of the United States of America!

Now, from Eric Garner, to Freddy Gray, Martese Johnson, to the countless others who didn’t have the option for justice; I’m questioning everything I once believed.  Possibly the most devastating for me of all of the many, many, many cases of police brutality will have to be that of Sandra Bland. This case has me the most devastated because more than any of the other victims that we’ve heard about, I could most easily see how Sandra Bland could be me.  Yes, I could be Sandra Bland!

Anyway, the point is that like many other people, I get irritated when I’m pulled over and I don’t hide it well. Am I threatening when I’m irritated? No! I’m just human and upset and not looking forward to the hassle of a ticket.   I also know my rights as a citizen and I’m not afraid to express that I do. I don’t smoke cigarettes, but I know that it is my right to have one lit in my personal car if I so choose.  I would demand to know the legal reason as to why I’m being arrested for a traffic violation even if I have to ask 14+ times.  So, it is very feasible for me to be pulled over and the scenario completely replicate this case with Sandra.  I could be Sandra Bland…And that is a terrifying thought!

Now would have my kids heard me say about all of this? Again, nothing directly. However, I believe this is what they know about police brutality:

Here’s the hardest part – how and when do you talk to your children about police brutality? How do you express it to them in a way that will not cause them to necessarily fear and hate the police, but to understand that there is a possibility for injustice in this country.

The verdict’s still out…

St. Patrick's Day Quiz Test your St. Paddy’s Day Knowledge! #StPatricksDay
The biggest lie I keep telling myself
Can you trust bloggers? A few words about bloggers and honesty
Confessions of a Chiro-wife: 5 biggest myths dispelled