I remember Star Wars being big part of my childhood and recall having a few Star Wars toys in my collection.  In fact, thanks in part to the latest movie releases, even today, Star Wars holds a very special memory in the hearts of both children and adults alike. With that said, I can make a pretty safe prediction that this newest set from LEGO is set to be one of the biggest sellers for the 2016 holiday season. Introducing the LEGO Star Wars Resistance X-Wing Fighter 75149! 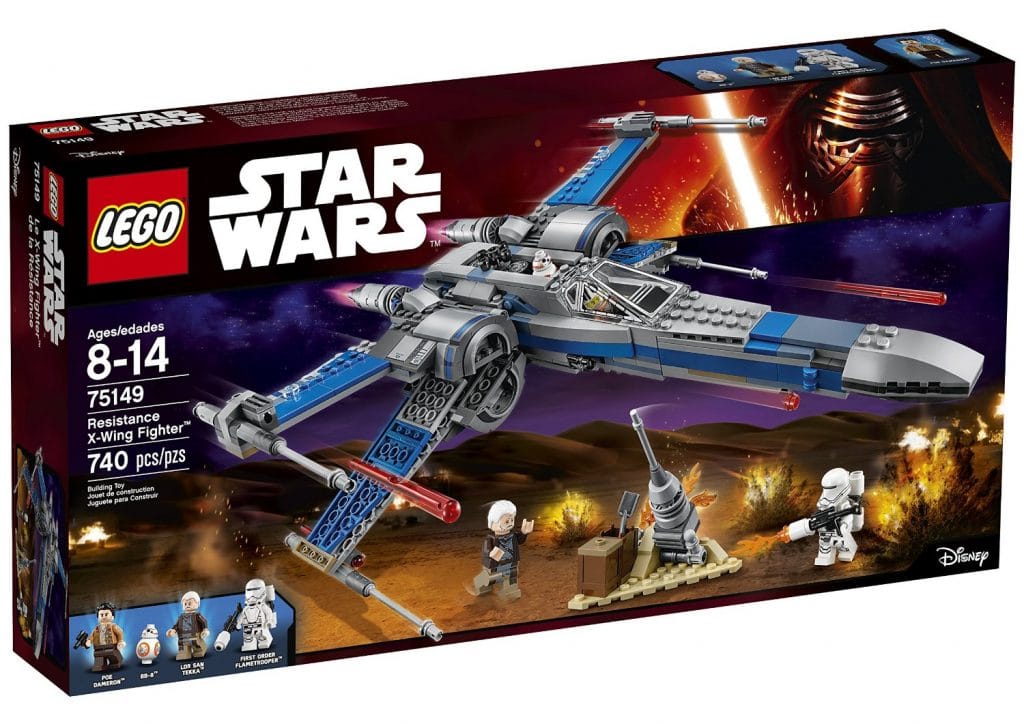 Inside the box, you’ll get all containers, a tower, knobs for joining flame shooters, a wrench, fire extinguisher, and make believe flames. You’ll also get 3 mini action figures of Poe Dameron (the commander of the Resistance’s Starfighter corps), Lor San Tekka (the legendary traveler and explorer), a First Order Flame Trooper, and a BB-8 Astromech Droid. Not only you have these cool figures but also you have their weapons like Poe’s pistol and the Flametrooper’s flamethrower.

The Resistance X Wing Fighter comes with opening wings, a cockpit, four spring loaded shooters, engines and so much more. The age range recommended for this set is 8-15, so if you have younger children you may need to help, though the average 10-year old kid should have no problem fixing it up on his own. With dimensions of 11cm height, 37cm length and 32cm in width with open wings, the X Wing Fighter will take about 3 hours to put together

Pros
• Provides hours of fun
• The model looks like the Resistance X wing fighter in the movie. The details and the thought that went behind making this model is just pure genius. It just feels very real.
• Teaches children patience as they fix the toy up
• Versatile toy that allows one to fly through war zones, carry out rescue missions, shoot at the bad guys, or bring supplies to other civilizations
• Compared to the Poe’s X wing fighter plane, the Resistance X wing is a far better upgrade with more toys and parts to play around with

Cons
• The back part of the toy gets opened easily, just like the nose
• Toy doesn’t have a proper storage area.

Overall, this is a great gift idea for anyone who knows a child (or adult!) that loves Star Wars! Just be sure to grab it quick before it sells out this holiday season.

Spring Break Styles For Kids: Carter’s Collection Available at Kohl’s #PlayAllDay @kohls
10+ Easy Science Fair Projects For Elementary School Students
5 Things to Look For When Choosing a Pediatric Dentist
8 places to donate used toys that the kids will be excited about