I have to say, STEM toys and robotic animals have soared to such new heights since I was a kid. One of the hottest toys slated for this season is the Meccasaur from Meccano. The Meccasaur is a fully programmable robotic dinosaur toy that interacts with the kids when they pet it.  Its eyes actually light up to a color that indicate the dinosaur’s feelings (ex. Green for happy, red for anger, etc.) How cool is that?! It also answers yes or no questions like the common 8-ball toy by nodding its head or shaking it and recognizes you or your kid’s voice. 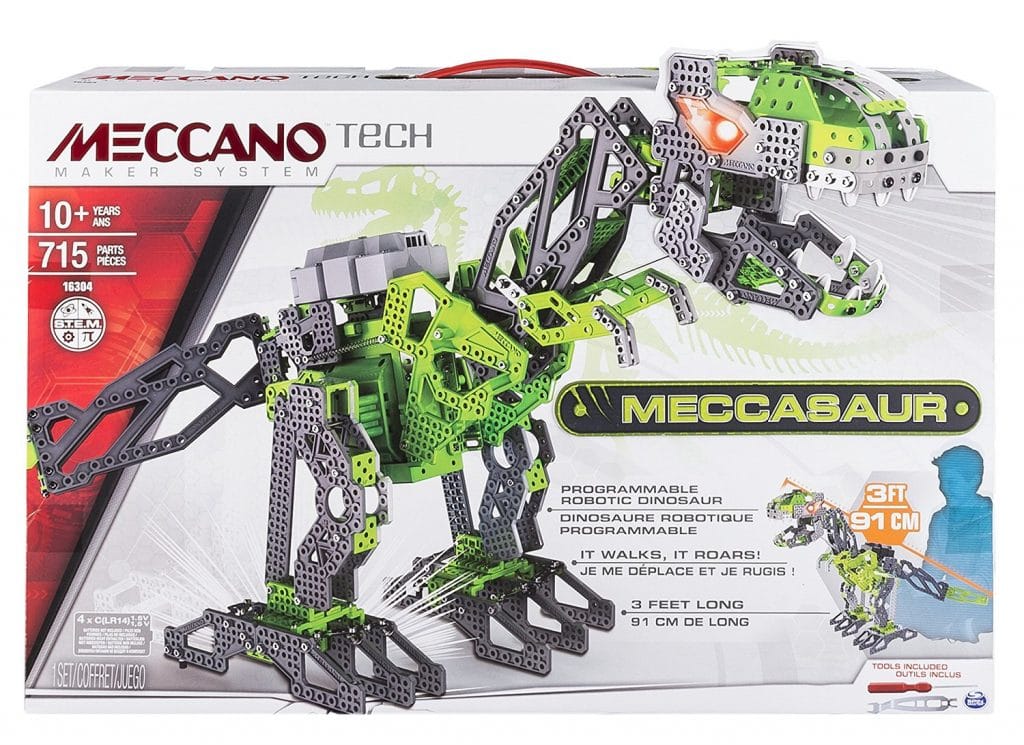 Additionally, the toy comes with a guard mode that reacts to sudden changes in lights and would then charge toward the light. You can program it’s movements like walking forward, backward, or sideways, and it does stomp too. These would definitely keep your kids entertained while learning how to build their own robots and programming it.

Here are some important things to know about the Meccasaur:

• It’s a 715-piece large 3-foot long robotic dinosaur toy that’s built from plastic and metal frame.
• It takes roughly 4 to 5 hours to complete the 715-piece robotic dinosaur from scratch. Younger kids will likely need your help building it, but for teens, it can help keep them busy and away from television, tablets and phones.

• It’s fully programmable and your kids will learn a lot while having fun at the same time.

• One reason it takes so much time to assemble the whole dinosaur and especially if it’s your first time owning a Meccano toy, you may have a hard time putting it together. If you mess up on single part or portion of putting together the dinosaur, there’s a good chance you might end up redoing the whole thing which is the major downside of this. But once you get the whole thing running it’ll be worth it.

If your kids love LEGO or started with those toys, they’ll surely enjoy this one. I personally would recommend it for teen/pre-teen kids, but it can be bought for kids ages 10 and up. It’s a great way to help kids develop a love of robotics and STEM and it’s relatively affordable compared to other toys similar to this. You can find it here on Amazon.com.

Discreet conversations: 5 things no one tells you about your post-pregnancy body
5 simple or unique things to do with your used maternity clothes
{Video} That's almost cruel!" "This is insane!" "Is that even legal?" #worldstoughestjob
15 Very Practical Uses for Vaseline