Do you have or know a little Paw Patrol fan? Well, here’s a gift idea they’ll love: 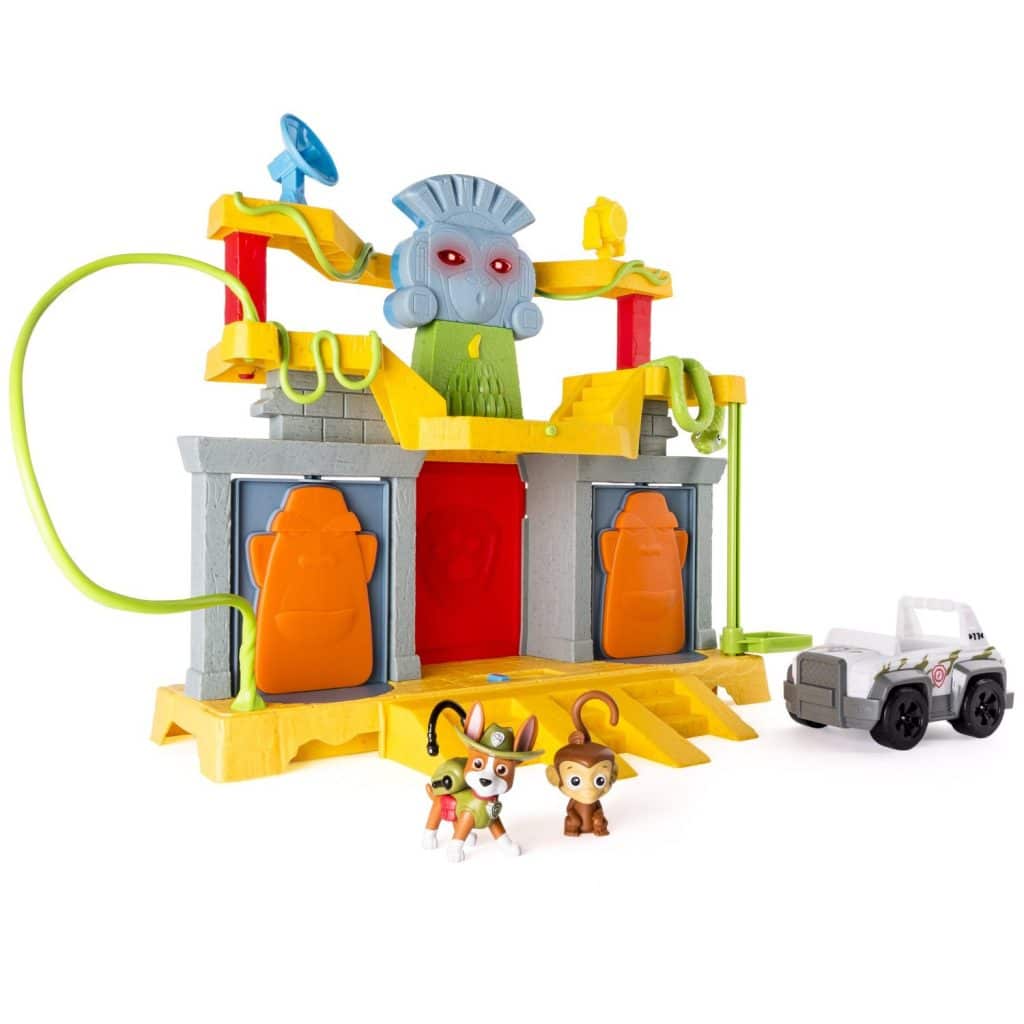 The Paw Patrol Monkey Temple is a two-in-one playset that has many cool features. It includes a puppy figure of Tracker, the newest Paw Patrol member, and Mandy the Monkey, his jungle adventure friend. The Temple comes equipped with Tracker’s rescue vehicle, an elevator and vines, real lights and sounds you can activate by pressing a button. The set also includes a trap door, radar dish and search light.

You can guide Tracker through a maze of challenges inside the Temple as he looks for Mandy. Turn on the light and sounds by simply pushing a button, go through the trap door or reach the top of the Temple using the elevator then swing down with the vines in search of Mandy. Once you complete the search, transform the Temple into a command center for your next rescue mission into the jungle using the tracker vehicle.

The Paw Patrol Playset has a variety of accessories that provides plenty of possibilities to create even more fun and exciting missions. There are other Paw Patrol pups and vehicles you can collect for endless jungle rescue and patrol missions.

The Paw Patrol themed Monkey Temple Playset from Spin Master Toys has plastic pieces and slots that fit together easily. Kids can quickly turn it into a Monkey Temple or command center. The Monkey Temple has trap doors, lights and sounds, secret getaways and up to a dozen functions and features that include:

• Two character figures of Tracker the pup and Mandy the monkey

• A yellow, banana-shaped button under the statue structure that you can press and make the eyes of statue lights up red and make monkey noises

• There are green vines growing on the temple, but one of the longest ones hangs from the second story and goes down to the ground floor. You can attach Tracker on to it using his backpack’s black strap or let Mandy’s swing by his tail then push both of them for a fun ride down to the ground.

• After transforming the temple into a command center, Kids can push a blue tab to make the temple’s revolving doors swing around and show videos of scenes from the jungle

• Kids can also fully rotate the top of the statue, press the yellow button to make it light up and make siren sounds.

Pros
• The set is sturdy, colorful, easy to assemble without the need of tools and the pieces just snap into place

• The set also has buttons, levers and doors to push and change the setting and provide other options like watching videos and pictures.

• You can buy and add other Paw Patrol characters and vehicles for more exciting action and adventure.

Cons
Most buyers have nothing but praises for this toy, but there are a few disadvantages associated with it. These include:

• Some of the electronic functions require a power source. So, when the batteries die, this will interfere with the play experience.

• The front of the package shows additional characters that are not included in the set, creating confusion for the buyer.

Spin Master’s Paw Patrol Monkey Temple Playset is more like two toys in one set. It has many great features and play options. The play set is made with durable and colorful material. Playing with the toy will awakens the sense of adventure and imagination in kids. The play set will keep your kids busy and give them many hours of exciting fun as they explore the hidden secrets in the temple and take their friends, Tracker and Mandy, on rescue missions in the wild imaginary jungle.

Becoming a Queen Boss: 11 Success Tips for Mompreneurs from Lauren Lake
9 Things Women Can Do To Help Prevent Birth Defects | National Birth Defects Prevention Month
Parenting is a perfectionist's nightmare... #ProgressIsPerfection
Matching Easter Dresses and the moments I wish I could have back…