Day 2 of NaBloPoMo and today’s writing prompt is:

What was the one toy that a friend had that you wished you had when you were little? 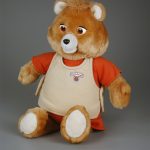 That’s an easy one for me…It was a Teddy Ruxpin doll.  Remember those?

My biological father (my parents are divorced) and I had a very rocky relationship growing up. I was actually daddy’s little girl at one point in time, until I was about 8 years old.  It was the same year I asked my dad to get me a Teddy Ruxpin doll for Christmas, but that wasn’t necessarily the reason our relationship went sour. Granted, I’m still a little bitter that I never got one, but in hindsight, there’s a web of bitterness, anger, and broken promises that has plagued the two of us for many, many years. 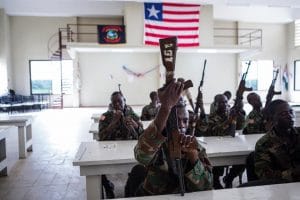 It was a strange year for my family altogether and the crux of it all was the Liberian Civil War.  As you recall from my Big Fat African Family, we are from Liberia, West Africa.  (My mom’s family is technically Lebanese, but they were all raised in Liberia and called it home)  Anyway, my family and I lived in Liberia when I was a baby and then came to America during the 1980 Coup d’etat.  It was often mentioned that we would go back to Liberia once things settled down a bit, but then the full-on Liberian Civil War started in 1988, when I was about 8 years old.

One day, my father told me he and I were skipping out on family dinner and going to White Castle instead (one of my favorite treats I miss living in the south).  Afterward, we went for some Carvel Ice Cream and that’s where he broke the news to me.  He would be going back to Liberia soon to take care of our family business in Liberia and make sure our property was safe.

Soon enough, his promise to give me a Teddy Ruxpin doll became less and less prominent…

And the broken promises continued. For years.

As I mentioned, I was about 8 years old when he left and by the time I finished college, I’d already become good and jaded by his absence.  He hadn’t attended a single graduation, met any of my friends/boyfriends, taught me those important lessons of life as only a father could, and I sure as hell never got that Teddy Ruxpin doll!  I remember sitting in my room listening to the Sean Paul song “Like Glue” one day and for the first time noticing the one line in the song – “But a promise is a comfort to a fool…” and I thought, “F#%ing right, it is!”

But life is funny sometimes….

My father and I officially reconciled exactly 10 years ago, just a month before I got married.  Through the most honest conversation I’d ever had with him, I realized that he too was a victim of his own promises.

And the broken promises continued. For years.

Truth be told, no one could ever have imagined that Liberia’s history would take such a tragic turn. Who would’ve thought that the Liberian Civil War that people thought would last for only 6 months, would end up lasting for 15 years and killing over 200,000 people and leaving a fatherless daughter behind to figure things out for herself? But during that time, there were lots of relationships destroyed, lots of bitter exchanges, lots of angry and jaded people, lots of hearts and promises broken.  Not just mine.

So, yes…I think I can just count my blessings and get over that one toy I never got.

But if someone happens to stumble across an old Teddy Ruxpin doll, can you send it to me???

ps – if you’re participating in NaBloPoMo this month, leave a link to your blog here!

Time Magazine: Define "Mom Enough" (Warning: Breastfeeding Debate)
Wordless Wednesday: Talk about a One Stop Shop
4 bold things to do when leaving your job to start your own business #ListerineBOLD
My Big Fat African Family ...on Christmas