Abigail Spencer is the talented actress who now stars the heroine, Lucy Preston in the in the brand new NBC show, Timeless – a thrilling action-adventure series in which a mysterious criminal steals a secret state-of-the-art time machine, intent on destroying America as we know it by changing the past. An unexpected team consisting of a scientist, a soldier and a history professor are developed who use the machine’s prototype to travel back in time to critical events to stop him. 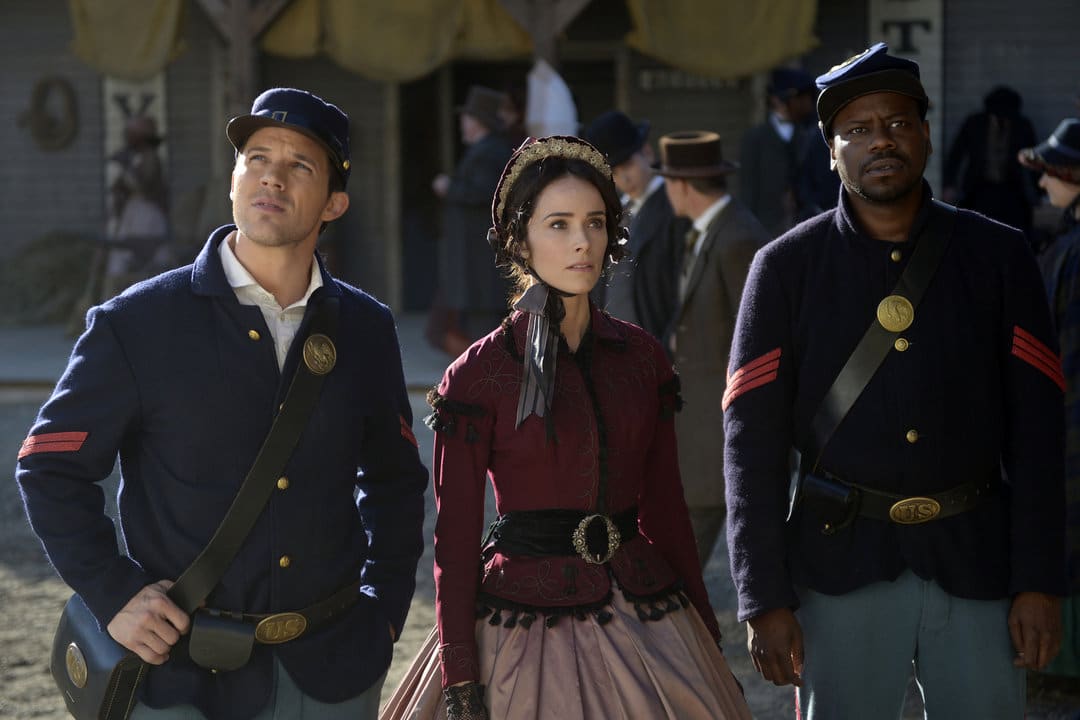 I sat on a call the other day with Abigail Spencer as we discussed her excitement about the show and why the character of Lucy means so much to her personally.

On the role of Lucy Preston in NBC’s Timeless

While Abigail Spencer has been involved with many spectacular shows, including Suits, Mad Men, Children’s Hospital, and NTSF:SVU, the role of Lucy in Timeless is a role she holds near and dear to her for several reasons.

She shared that one of the major factors that drew her to the role of Lucy was the fact that she would be able to play a woman on TV who young girls could look up to. You’ll see on the show that Lucy is her own person and a heroine whose single superpower is her smarts. It was most important for Abigail to be on a show that her son could watch and would, in fact, bring families together to watch.

Additionally, Abigail shared how much the character Lucy reminded her of her own mother and draws from her mother’s strength in creating the role.

“My mother leads with her intelligence. {She’s} a little goofy. She’s very self-deprecating…I really look up to her and I don’t see a lot her on television. I was taught that you lead with your personality and your brain. I am very grateful that she taught me to invest in that in an early age. With each of my characters, I try to find some spirit of hers in there.”

Abigail admits that while she is not a historian in real life, she is quite a bit like Lucy in the sense that she’s not perfect; (she says she’s kind of a goofball) and that’s all part of what she loves. She loves to find fun ways to bring herself into the character.

Most of all, she’s excited about the possibilities of the character of Lucy and where she could go.

On time travel and history

Abigail shared that she was not much of a history buff before the show (nor was she a time-traveler), she recalls that her late father was. Amidst a funny story of how prior to her dad becoming a professional surfer, he’d failed his senior year from taking off surfing too much, and had to make up for his missed education by reading history books. He was critical in fostering an appreciation of history in her. She believes that history is a form of storytelling that she can appreciate as an actor.

The prominent historical themes on Timeless, she says, helps her to not only feel a little smarter, but to also have more respect from where we come from and a discerning eye.

As far as the era Abigail would most like to visit, Eden would be her first choice, with the 40s era a close second.

On being a working mother

Abigail is a mother to an 8 year old son and, as we can all relate to, being a mom has become such a defining experience for her as far as her passions and drive. She believes her son was somewhat of a rebirth for her and is her greatest motivation to show him the significance of following and living your dream.

Needless to say, the biggest challenge she faces being a working mom is not being able to see him during the week while she is filming, as Timeless is shot is Vancouver and she and her family live in California. So, yes, even the talented Abigail Spencer struggles with finding balance as a working mom!

When asked what she loves most about working on a show about time travel, Abigail excitedly shared, “The Fashion!” Since every episode is pretty much a new movie every week, fashion is quite heavily a part of the show as the wardrobes must be designed with each show to represent women of various eras. 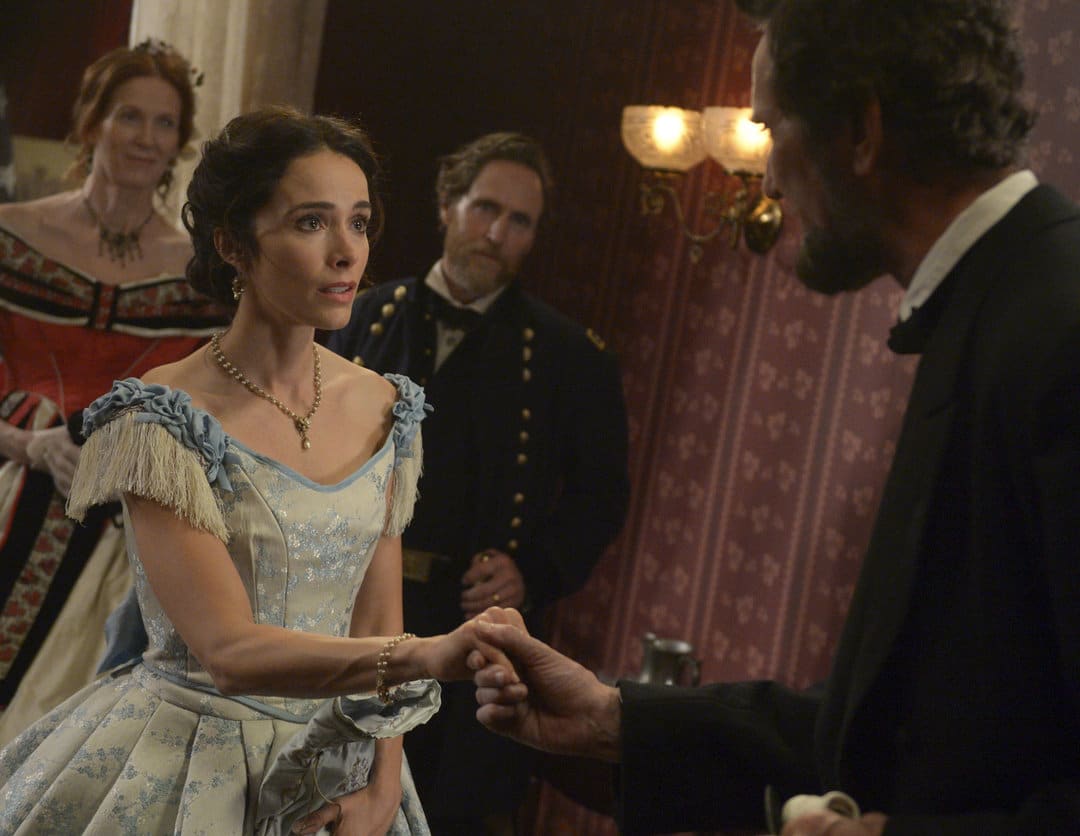 Abigail’s favorite costumes come from the 1940s and 1970s because of the cool and comfortable designs. Like many women, she was not much of a fan of the 1750s corsets, which you can only imagine how uncomfortable those must be. Who did that to women anyway?!

Another cool fact about the fashion from the show is the fact that some of the costumes you’ll find Abigail wearing during the show came from one actual woman who sold her wardrobe in an auction. “It’s history within history.”

On what to expect from this season on Timeless

The one major rule of time travel on the show is that the actors can never go back to a time period they’ve already visited.

This Monday, they go to 1865 where Lincoln was assassinated. Other eras/historical time periods you can look forward to this season include the 1962 Democratic National Convention with JFK, The Alamo, Watergate, The 1969 Moon Landing, and much more. One thing Abigail assures us is that with each episode, we’ll learn something about history we didn’t know actually happened.

“The Assassination of Abraham Lincoln” airs Monday, October 10 at 10/9c on NBC
THE TEAM CAN SAVE THE LIFE OF ONE OF HISTORY’S GREATEST MEN.
Lucy (Abigail Spencer), Wyatt (Matt Lanter), and Rufus (Malcolm Barrett) chase terrorist Garcia Flynn (Goran Višnjić) to the night of Lincoln’s assassination, where they’re horrified to learn that Flynn’s linked up with history’s most notorious assassin, John Wilkes Booth (guest star Kelly Blatz). Putting aside a tragedy of her own, Lucy speculates that Flynn intends to send the fragile nation into chaos by making a bad thing worse, and a debate rages among the team: should they alter history if it means changing it for the better? Also starring Paterson Joseph, Sakina Jaffrey and Claudia Doumit. Guest starring Neal Bledsoe, Michael Krebs, Terry Lewis and Lucia Frangione.

If you’ve been tuning into NBC’s Timeless, be sure share your thoughts on the show in the comments below!

Disclosure: This post was sponsored by the Role Mommy Writer’s Network.

Where to find all of your favorite Black Panther products and toys!
Review: The Illusionists - Live From Broadway
My Dolby Cinema Viewing Experience and Moana Review
Moana Family Movie Night & In Home Viewing Party!

« Moana Coloring Pages and Kids Activity Sheets – Printable!
Hanging out with The Hecks! What to expect from Season 8 of “The Middle” »