So, I was in Orlando celebrating the digital Release of the timeless classic, The Lion King. We were an event featuring all of the tastes of Disney’s Animal Kingdom (the food there is incredible btw) and next thing I knew, I heard a familiar voice shouting, “Hakuna Matata!”

Yes, it was Ernie Sabella, the unmistakable voice of Pumbaa! You ever meet someone whose energy and vigor completely brightens the room? That’s Ernie! He was just as cheerful as can be!  We chatted for a while and he shared some fun stories with us about himself and we shared as well. Then, in true blogger fashion, we started pulling out our cameras. Only, instead of a picture, he offered to record a special message for my daughters!

How fun is that?! 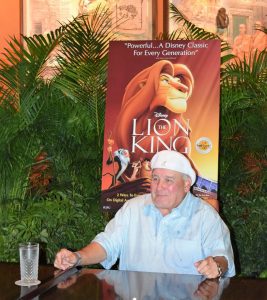 A couple of days later, we all got to sit with him to talk about his experience and memories working on the original film and his excitement about the fact that it was now going to be the 5th film being added to the Disney Signature Collection. Here are some of the highlights of our interview:

What were your thoughts when you were first approached about the movie?

Ernie shared that they’d asked he and Nathan to read for the hyena and in a padded booth, they read a script filled with improv. “When we finally got done we looked at him, and his mouth was open. And I thought, all right, let’s just get out of here before he kills us.” As we know now, that was not the case and in fact, Ernie recalls that he got THE call. Actually, from Nathan.

“I said, no, not me. You didn’t? Should I? No, no. So I call my agent. I said have you heard about this thing? Oh, yeah! You’re gonna playing a part called Pumbaa.”

How does it feel to see a whole new generation respond to you still?

It’s a gift, and it keeps giving. And I kinda got it this week that it’s not gonna stop. It’s gonna be way after I’m gone. And I love that.

Be sure to check out The Lion King now on Digital HD and BluRay! Hakuna Matata…

Frozen 2 Coloring Pages and Activities for Kids - Free Disney Printables
Marvel's Victoria Alonso proves that the biggest superhero of all is The Working Mom!
21 Old School Games to Teach the Kids During the Quarantine
Meet the bright young stars from Pete’s Dragon – Oakes Fegley and Oona Laurence Interview #PetesDrag...