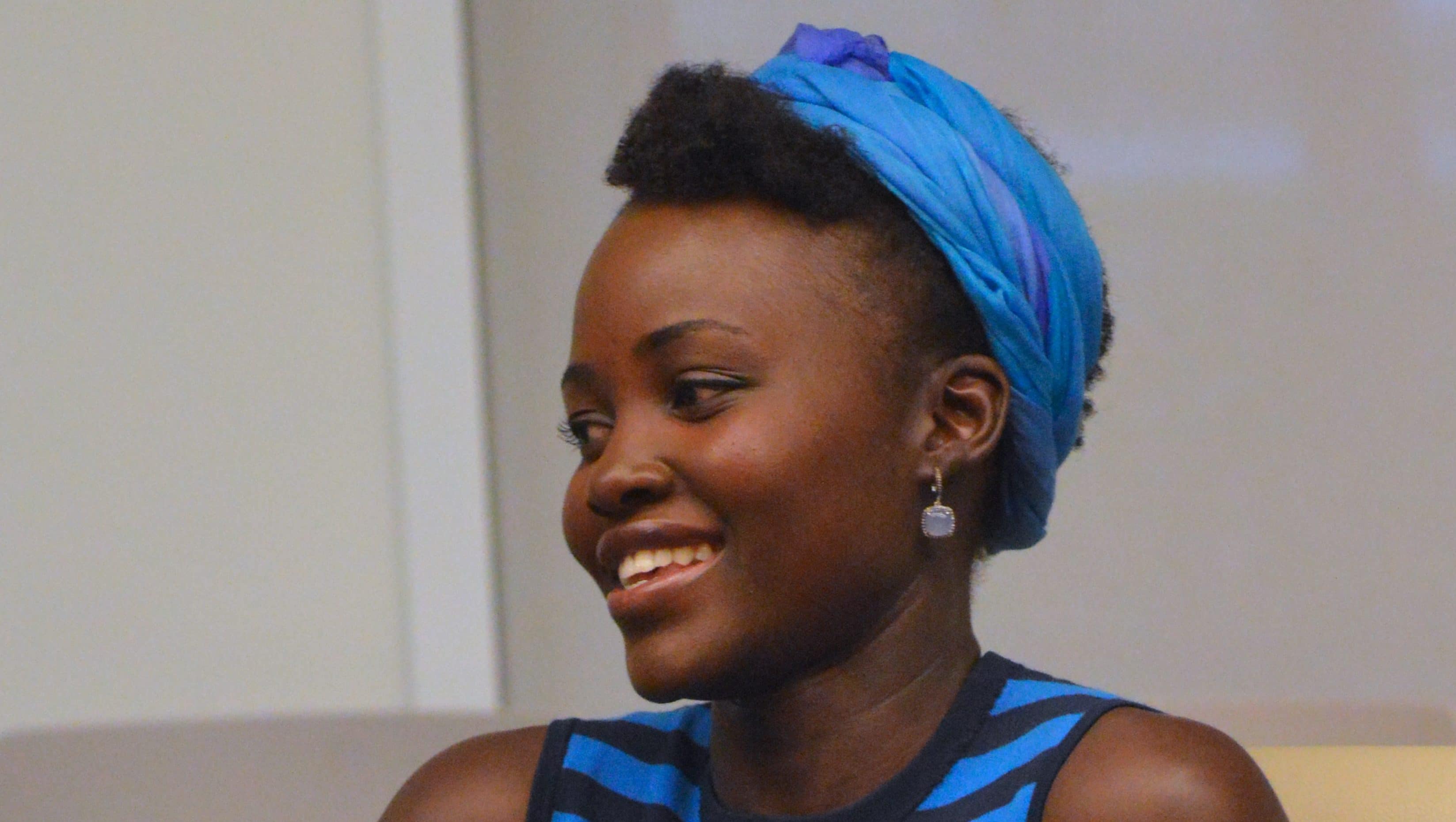 Certainly one of the highlights of my time in LA for the Queen of Katwe press event was having the opportunity to interview Lupita Nyong’o. Best known for her Oscar winning role in 12 Years a Slave, Nyong’o has held quite a few pivotal roles in recent years, including Maz Kanata in “Star Wars: The Force Awakens” and “The Jungle Book” as Raksha. Throughout my Liberian community, she has been hailed as quite a hero for her starring role and Broadway debut in Danai Gurira’s play “Eclipsed,” the story of five extraordinary women brought together by the upheaval ofwar in their homeland Liberia. She also recently graced us on the cover of Vogue Magazine, an honor she shared filled her with elation as she was given the chance to return to and represent her native country of Kenya.

What many people don’t know is that Lupita Nyong’o’s success is certainly not accidental, as she is also a graduate of Yale School of Drama’s acting program.

Lupita Nyong’o now takes on the critical role of playing Nakku Harriet, mother of International chess wonder Phiona Mutesi in the film Queen of Katwe. During our interview, she was joined by 2 additional stars of the film, Madina Nalwanga who plays Phiona Mutesi and Martin Kabanza, who plays Phiona’s brother, Mugabi Brian. 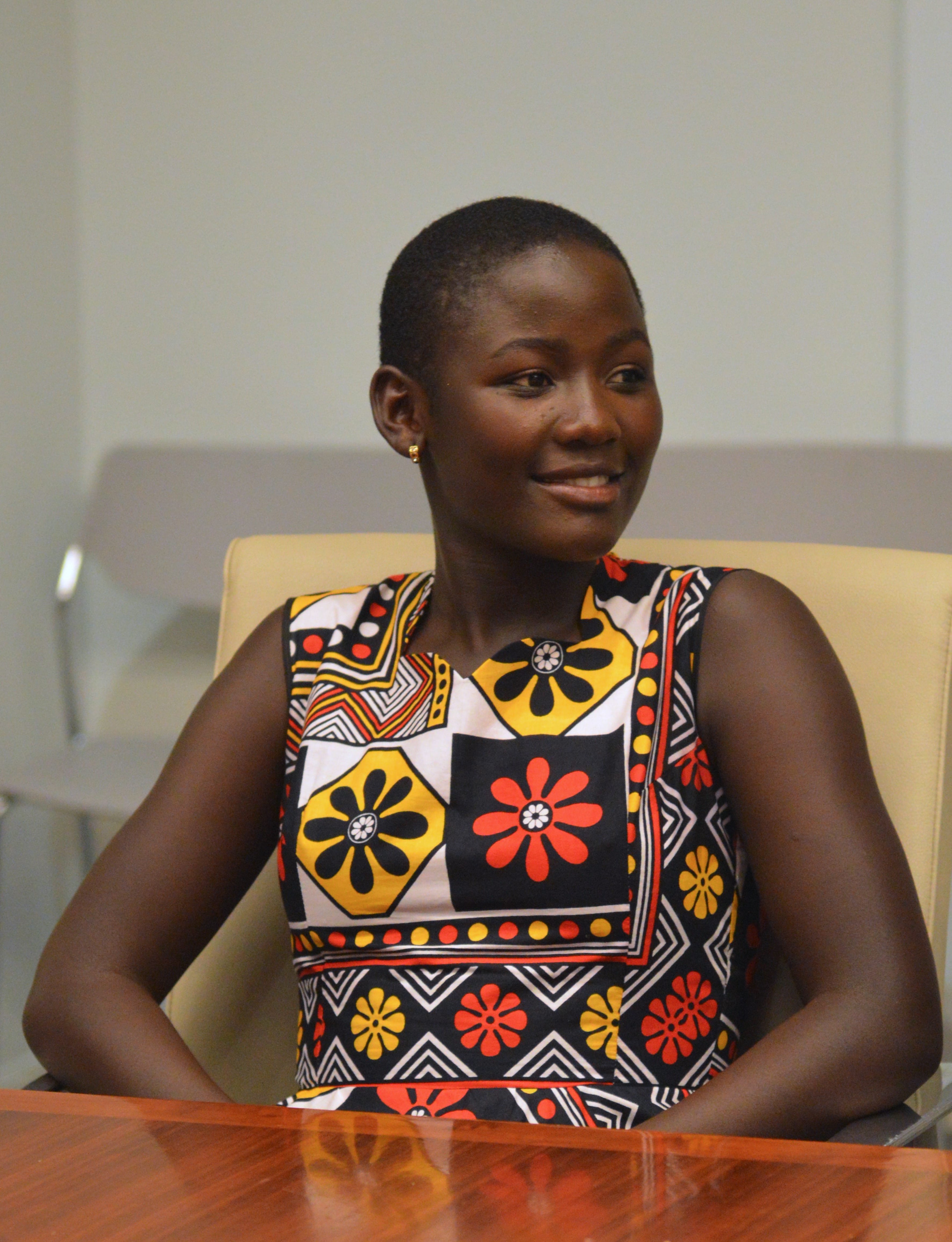 This is the acting debut for both Madina and Martin, who are both from Kampala, Uganda just like the real Phiona Mutesi. Madina has led quite a similar life to Phiona, making her the ideal person for this role. Where Phiona’s way out of her impoverished life was her chess talent, Madina became a lead dancer in Kampala’s dance academy. She can also sing in 12 different languages and attends high school with her education being subsidized by the dance academy. Martin was discovered for the role while playing football and is a freshman in high school. 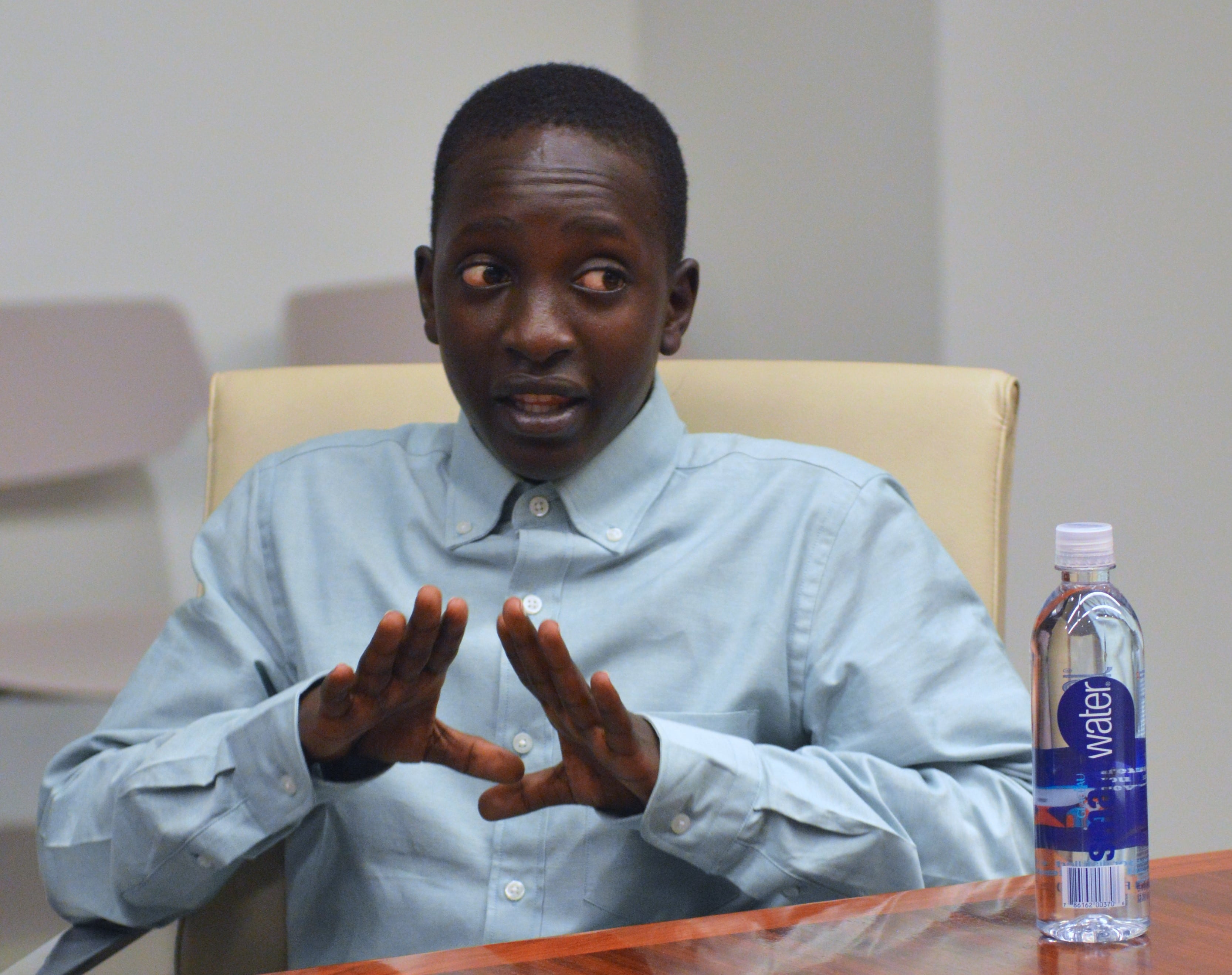 The chemistry between Lupita, Madina and Martin was apparent from the moment they walked in the room. The children still refer to Lupita as “Mom,” a title Lupita embraced.

Here are some of the highlights from our exclusive interview with Lupita Nyong’o, Madina Nalwanga, and Martin Kabanza:

What was it like for the three of you working together?

Lupita Nyong’o: We like each other. And we had a lot of fun together. I met them before we started shooting. Once Madina was cast, (it was a long process for her to be cast), I walked into a rehearsal workshop situation where they had my whole family there and I walked in and she just, she said, “Hi, Mom.”

They were both just so receptive to me and Madina actually taught me how to cook. She sold corn in her past and I asked her to show me to go shopping in the market. My whole onscreen family, we went and did it together and then we went back to her house and she showed me how to prepare the meal.

So we broke the ice that was and we had a really great working relationship. They’re really hungry and curious and present as actors and it was so lovely for me to have that kind of immediate condition to work in.

Martin Kabanza: I never knew anything about acting, but she taught us how to get into character. You know, we used to copy her everything she’d do. She was so good. She was a good mom.

Madina Nalwanga: I really used to copy her and I named myself “copycat” because every time I’d see her getting to character, I’d do what she was doing. She really helped me in some of the hard scenes {such as crying scenes}. They are really hard because you’ll never find dancers sad.
She was there for me to make sure that I get into character so that I can cry. She really helped me so much.

That’s why I still call her mom because ever since I was young and I ever since I left my mom to go to school, I’ve never had someone else or anyone else that I’ve ever called Mom. And she really acts it.

Martin: I was raised by my grandparents. My mother left me when I was three months, so, me too, [It was] my first time to say mom.

Are there any scenes that were especially touching for you?

Lupita: Touching, my goodness. What wasn’t touching? I do remember once we were about to shoot the eviction scene. I was sitting in our tent where we’d wait and these two were very quiet and quite pensive and, and I asked them, you know, how they felt. And they both mentioned how this was their life. You know, they both experienced evictions in their past and I just remember being really moved at how this artifice was reflecting a real life in Phiona, but also a real in both of them. And that they were having this chance to tell their story, and to bring it to a larger audience that would understand the challenges of poverty.

But also the triumph of people who live through it and the fact that poverty is not one’s definition. They were going to have this chance to put that experience of their past into very, very good and immediate use in the scene were about to shoot. Obviously, I come from a very different background. I come from a background of privilege and so I was very humbled in that moment. Here I am playing the mother and being the shepherdess of these two going through this experience and yet, I was learning so much from them. I was just humbled by that moment and being able to take their lead as we went to do that scene.

What was your favorite scene in the movie?

Martin: My favorite scene was Boda, where I run for the chicken. (We all laughed at that scene and could just imagine his joy in that moment)

Madina: My favorite part in the movie was seeing David [Oyelowo] running around doing the cat and dog scene because I’ve never had someone who has time for me, who has time for all of us. And he had time for us, so I respected him, his time and I enjoyed watching what he was doing for us.

Martin: Another scene that I liked in the movie is the flood scene. I like Mama doing it. She was so real and me, I didn’t have that power of crying, but she made me cry in that scene because she was so real.

Lupita: It was really cold. We shot that in South Africa over four days and it was the winter time in South Africa, so it was a little shy of thirty degrees. We would get to set, get into our costumes, go into a hot tub, get wet and then go into this freezing cold water all day. Every time they said, “Cut,” we’d run to this hot tub.

Madina: Yeah, I also had another second [memorable] scene. This scene where by here is to be knocked by a “boda boda.” It was so bad for me because I had an accident with a car when I was little. It was so, so bad for me and to make me remember the conditions that I was in when I was knocked down by a car.

Do you prefer roles in stories that have never been told and what do you hope to bring to the forefront in playing those roles?

Lupita: Well, I love playing roles that stretch me and help me to learn something new and deep about the human experience. It was not by design that I set out to play African women, but how happy I am to have had these opportunities because I think Africa all to often is, is blanket. It’s just a blanket statement. There’s so specificity. It’s a very general wash of ideas that people have of this continent where I’m from and I know, being from there, that it is many splendored. So to be able to bring to the forefront stories; particular and specific stories about African women in their variety is so exciting to me because I’m a child of global popular culture. I grew up watching Mexican, Brazilian, Australian, English, American TV and cinema and I think I was able to identify with all those people that I met and learn something new about those cultures. I’d never worn a winter coat, but I know when you’re in New York, you have a winter coat. So for an African story, to be playing that same kind of role, being a universal story that’s still and it’s specificity as we find with Phiona Mutesi in this story of Queen of Katwe, it is my pride and my joy.

I am so happy to be able to play a part in making the African woman the global woman. 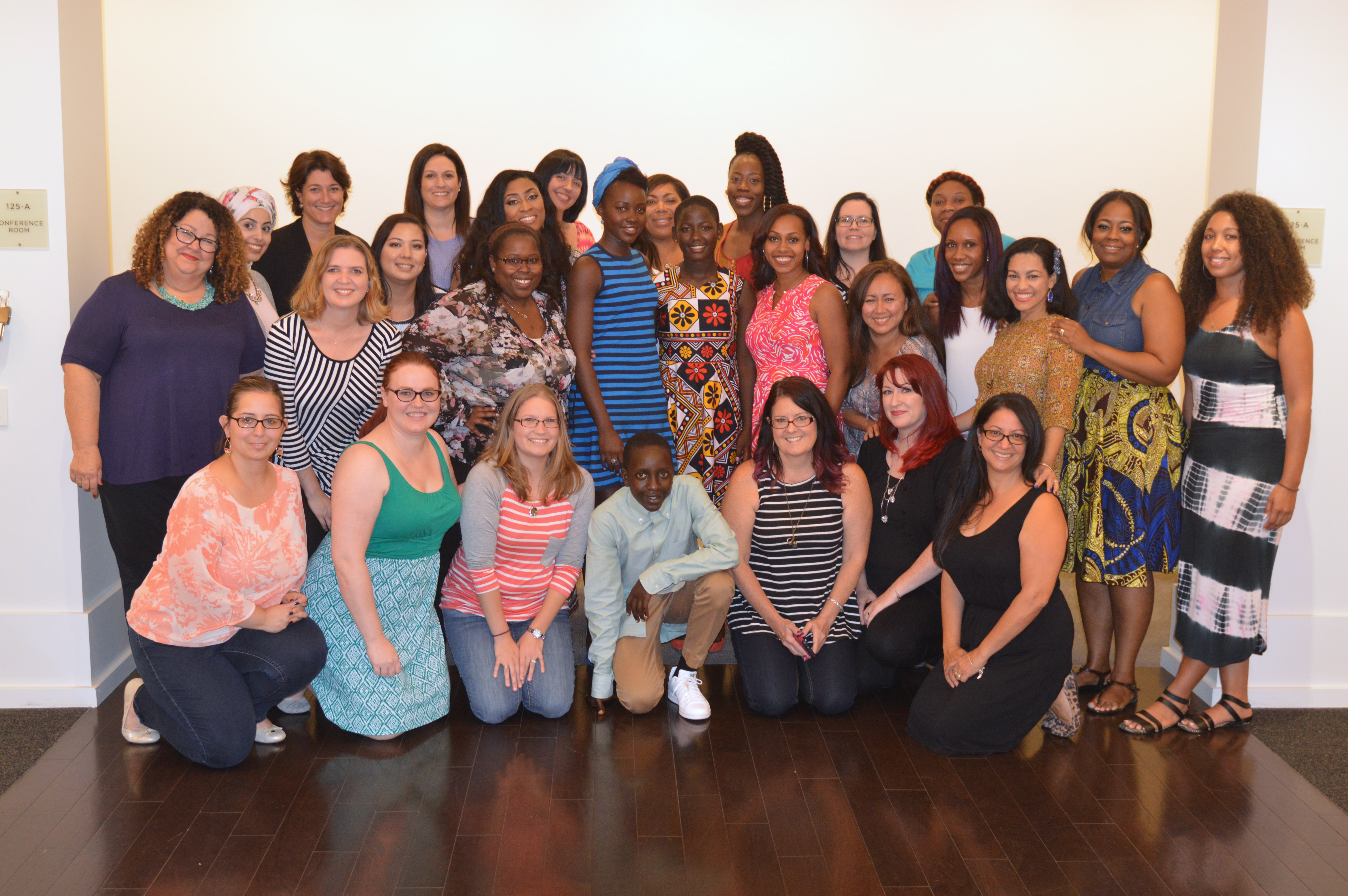 Again, the sheer grace that filled the room was truly memorable and we appreciated meeting and chatting with these incredible actors.  Be sure to check out their amazing perfromances in Disney’s Queen of Katwe, in select theaters this week, everywhere on 9/30.