I have what is appropriately called, “angry resting face.” There’s also a happy resting face, bitchy resting face, and perhaps a few more.  That basically means that if I’m not deliberately smiling, chances are, I look like I’m angry about something at times when there isn’t a thought in my head.  Then there’s times when I’m just tired, or frustrated, or…wait for it…angry!  The point is that none of these emotions warrant a smile. 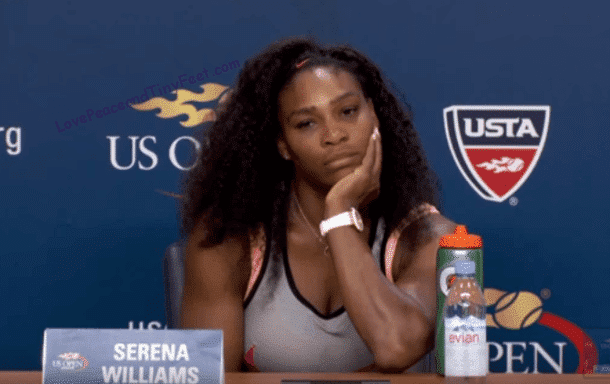 I stumbled upon this story of Serena Williams recently being asked why she wasn’t smiling after she defeated her sister Venus in the U.S. Open quarterfinals.  She basically responds, I’m not smiling because I’m tired, and you’re asking me the same questions over and over, and I want to go to bed; not flashing a smile for you.

The masses and media immediately took Serena’s side and filled the waves with praise for her standing up for herself.   They stated, “She is paid to win matches, not to smile for reporters” and other similar sentiments.  I jumped right on the band wagon with a “Go Serena!”  fully embracing strength and power behind the message being put out. Stop telling girls to smile!  I thought back to the million and one times I’ve had some random guy on the street tell me to smile.  I thought back to the million and two times my mom has told me, “you look prettier when you smile.”

Again, the message was clear, “Stop telling girls to smile!”

So here’s the clincher…flashback to…oh…this morning as I was taking the girls to school bright and early.  I looked back and saw a pouty, angry looking Leila.  “Leila, why are you angry?  Leila, stop frowning. Leila, you look prettier when you smile!”  Yes, those were the words that came out of my mouth.  Talk about turning into your mother!

So here it is, my kids are not morning people (they get that from both sides), no one was overtly happy and jolly at 6:50 am.  Leila was tired, cranky, just wanted to be in bed (like all of us) and should have felt comfortable to just be angry in the comfort of the family car and there I had gone and ruined it for her!

I want to say that I’d never tell her to smile again, but I can’t say that’s true.  There really is a science behind how people are perceived by their resting faces and facial expressions.  According to an article on Today, a study at Princeton University had some people consistently rated by test subjects as either angry or happy.  The naturally angry-looking people (those with the angry resting face) were rated less trustworthy, while the happy-looking people (happy resting face) were given the benefit of the doubt. So there we have it: face-ism!

« A tale of two kids who wouldn’t sleep in their own beds …
True life…I’m a soccer mom! »