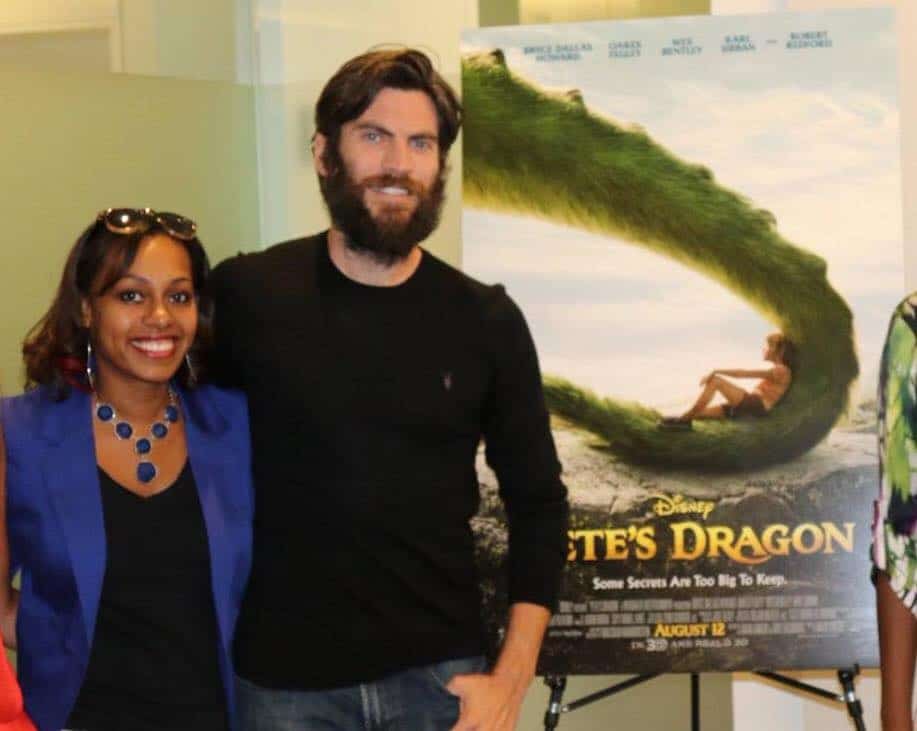 The interview with Wes Bentley was among the first we did during my recent Pete’s Dragon event. It was the morning of the premiere, so we hadn’t actually had a chance to see the movie yet. On top of that, we were filled with excitement to meet Wes and pick his brain a little bit about this being his first Disney film and his overall thoughts of the movie Pete’s Dragon.

First, he was a super friendly guy (as we’ve seen with the entire cast). If you’re not familiar with Wes Bentley’s career, he has been known to play some roles quite opposite his character of Jack in Pete’s Dragon. Wes first gained recognition for his role in the Oscar®-winning film, “American Beauty,” in which he played the soulful, artistic next-door neighbor. He also portrayed game maker Seneca Crane in “The Hunger Games” and was most recently seen in Ryan Murphy’s “American Horror Story: Hotel,” as the very dark character of John Lowe. He has an impressive and diverse background in acting, from his founding of an improv comedy troupe to having studied at Juilliard School in New York for a period of time. All of which has prepared him to not only play a variety of different roles, but truly bring those characters to life in his own way.

Although Wes Bentley resides in Los Angeles with his family, he and his family had to relocate to New Zealand for the filming of Pete’s Dragon. He was there for 3 months total and shared how much he enjoyed his time there, describing it as “the gem of the world” as it brings you the element of being far away from the madness. 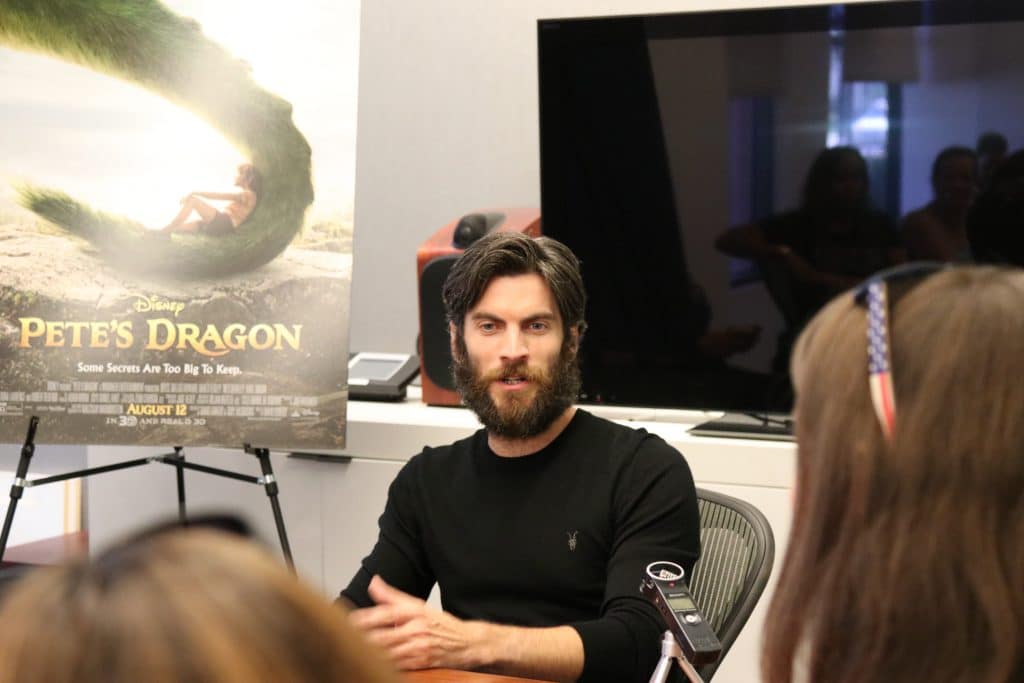 Wes Bentley on being in his first Disney film:

Wes has been a Disney fan since he was a kid and was excited to be a part of this project in particular. Being a dad, he wanted to do something he could share with his kids while they are young. (Since, he obviously could NOT share his first film with them! haha)  Actually, what’s even funnier is the fact that his son was able to “help out” on set a little bit, running errands for the Assistant Directors in exchange for a New Zealand dollar.

Additionally, Wes shared that he didn’t actually have to audition for Pete’s Dragon. Rather, it was Director David Lowery who pushed to have him as a part of this project.

Coming from such dark characters, I really wanted to know what it was like for him as an actor transitioning to a “nice guy” role:

Yeah, it was… it didn’t feel like it should be hard ’cause I am a nice guy. And I have my own kids. But I’m aware of my film habits because I have for so long played guys who are darker or dealing with very complex issues. So I came in really aware that there were obviously things about me that people see that as.
Usually it’s my eyebrows, something as simple as that. I was very aware of my eyebrows and just trying to like make sure my face showed my inner feelings which doesn’t always happen. I’ve always had to deal with, “Why are you so mad?” or “What are you angry about?” when I wasn’t. I wasn’t. I was thinking about lollipops and cotton candy.

I got that! Remember my post on my apparent angry resting face?

Wes Bentley on the environment:

Wes Bentley’s character Jack runs a lumbering company along with his brother, Gavin. Jack is walking the line of having to make money for his company and the small town people who depend on that company; involving some environmentally detrimental decisions to be made. Meanwhile, Jack’s love interest (Bryce Dallas Howard) is protective of the environment and forces him to become more environmentally aware in the process.

Wes shared that there was a part of filming this movie that also changed his own perspective on the topic. For example, being in New Zealand where lumber is one of their major exports, he found that some of the places they were filming were basically tree farms with sections of torn down trees. Although you know they’re going to good use, you also know they won’t regrow for a decade or more.

What I learned is that it’s a hard balance in the end and it’s not just a simple “we shouldn’t do it” kind of thing. It’s just {a matter of} can we do it responsibly?

Wes Bentley on what’s next:

Though he mentioned that Pete’s Dragon was in the direction of where he wanted to go, we were curious as to what Wes saw for his future in the industry. With a background and love for comedy and incredible range, he admitted that he’d always gotten dramatic roles right away. He shared that he would ultimately like to go back to that sort of slapstick, silly, say what’s on your mind sort of comedic character. You know, sans the dangerous, devious ideas. 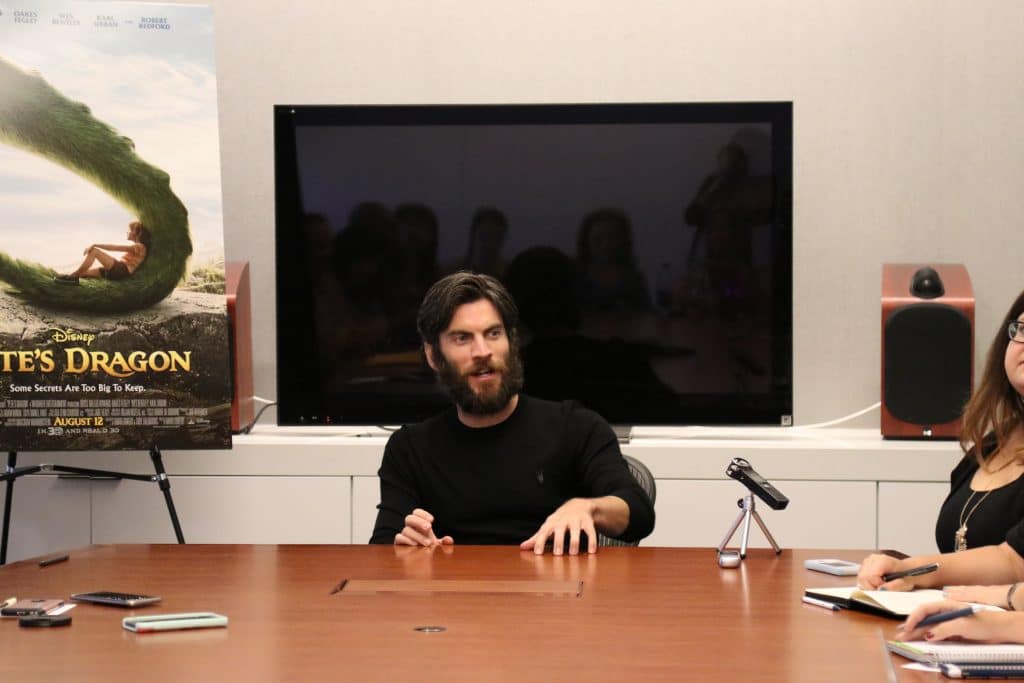 Lupita Nyong’o and Danai Gurira on the women warriors of Wakanda
21 Old School Games to Teach the Kids During the Quarantine
Meet the Characters and Cast of Disney Cars 3
What Quantico fans can expect this season with Marlee Matlin!