When Marvel announced the making of the Captain Marvel movie, it seemed only hardcore fans knew who she really was. I was pretty familiar with her as one of the most iconic female Marvel superheroes, but I had to get to some research to learn more about Ms. Carol Danvers and the Original Captain Marvel. Not sure of how much of historical context you’ll find in the movie, but it’s always a good idea to know these cool facts.  If for nothing else than to show off your Captain Marvel knowledge and Marvel trivia.

Set in the 1990s, Marvel Studios’ CAPTAIN MARVEL is an all-new adventure from a previously unseen period in the history of the Marvel Cinematic Universe that follows the journey of Carol Danvers as she becomes one of the universe’s most powerful heroes. While a galactic war between two alien races reaches Earth, Danvers finds herself and a small cadre of allies at the center of the maelstrom.

13 Facts You Should Know About The Original Captain Marvel

1.Bill Parker and C.C. Beck created the original Captain Marvel in the year 1939 for the Fawcett publications. He was actually a boy named Billy Batson and possessed the power to change into Captain Marvel by using the magical word “SHAZAM!” The magic word was as well the name belonging to the wizard who accorded him that power. However, the appeal of this character came to a standstill in 1953, and in 1967 Marvel eventually had a girl become their new and own Captain Marvel.

2. The Captain Marvel created by Marvel was named Mar-Vell and was an alien warrior. Disguised as a rocket scientist, the captain went into Cape Canaveral where he then met Carol Danvers the soon to be Captain Marvel. During their adventures an explosion happened and he shielded her with his body. This resulted in the appearance of a new superhero Ms. Marvel who turned out to be Carol Danvers. What happened is that during the explosion Carol blended her DNA with the alien Captain Mar-Vell through radiation which gave her powers similar to that of Captain Mar-Vell.

3. She struggled with alcohol addiction – During the darkest period of her history, she was subjected to a series of tragedies like the death of her boyfriend, her torture, and even kidnapping. She later re-joined the Avengers as a Warbird and it is during this period that she developed a dependence on alcohol. The addiction negatively impacted her life due to the fact that she chose not to vocalize the issue. It was Tony Stark that helped in setting her back on the right track.

4. Captain Marvel’s original costume was not that pleasant, as it was said to be an X-rated kind of costume. She had an odd cut of her top and that sort of practical outfit would never work. Her current costume is well designed clearly showcasing a super heroine.

5. She gets around in teams and has been one of the busiest characters in Marvel. She has worked in the CIA, Air force, and even S.H.I.E.L.D. She’s even earned a temporary spot on the X-Men, joined Guardians of the Galaxy for a short stint, has been associated with defenders, Starjammers, and even Excalibur.

6. Captain Marvel has been killed multiple times- rogue permanently absorbed her powers as well as personality of Ms. Marvel. But just like every rite of passage for all superheroes to be killed and then brought back to life, she was able to come back bigger and much stronger.

7. She was almost broken during “House of M” by Scarlet Witch. The setback broke Carol but she used the experience to transform herself into a greater version of herself.

8. She faced identity crisis- the character of Carol Danvers is exceptional as compared to other superheroes who take several different mantles over the course of their histories. She became Ms. Marvel for several decades but has now taken the role of Captain Marvel who was her former mentor.

9. She is half Kree and half human –although she is very much human, she is also partly Kree. This came about from her adventures with Mar-Vell when the explosion and her DNA blended with that of Mar-Vell who was an alien being.

10. Her powers doubled from a brood experiment- after the permanent absorption of her powers from the mutant Rogue, Carol Danvers spent time with the X-Men. During their missions she was captured by a brutal race of parasitic alien beings which found out that she was Kree and half human. The aliens became fascinated by this and a number of experiments were done to her which gave her godlike powers.

See Also: 3 things I can share from my top secret visit to the set of Captain Marvel

12. She had a romantic connection with Rhodey. Over the years she has been romantically connected with some of the Marvel characters such as Spider Man, Wonder Man, and the most recent one James Rhodes.

13. She had a split personality. After the explosion,  her brain was severely damaged for a while. This led her to frequent blackouts and this fractured her identity.

So here you have it. 13 little known facts about the original Captain Marvel to store in your mental Marvel database! (Or you can just bookmark this page and return to it whenever you need a refresher.) Did you know about these or did I leave any out? Share in the comments below! 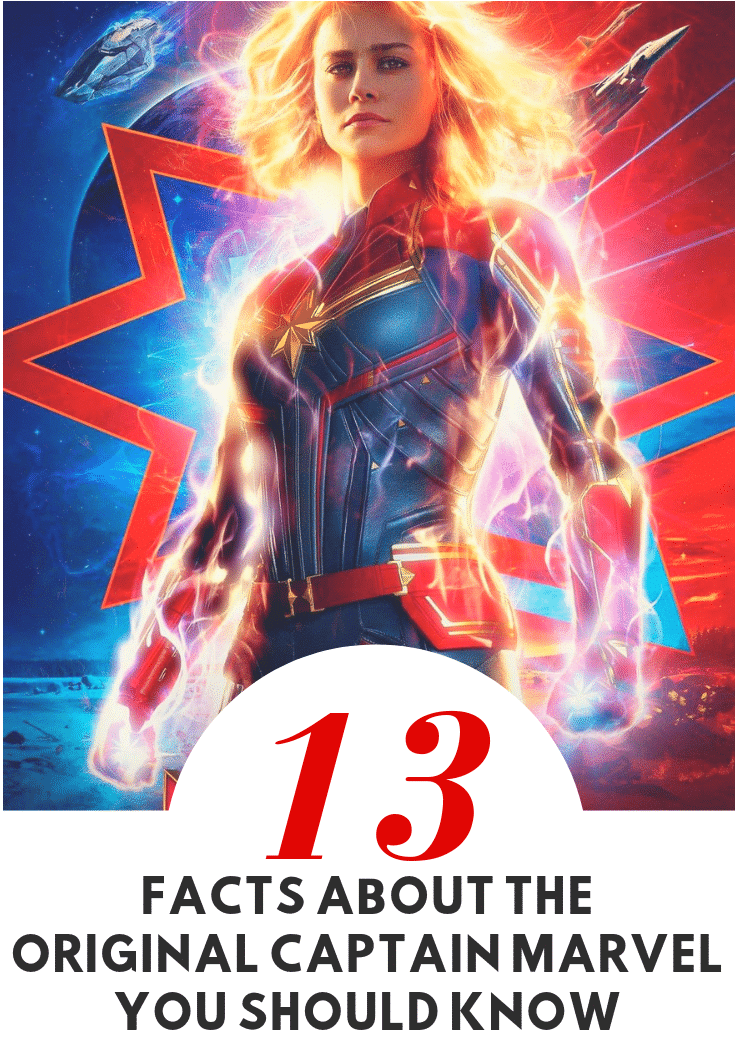