On November 3rd, fans everywhere will get to see the third sequel to 2011’s and 2013’s Thor in Marvel’s Thor: Ragnarok! During my recent #ThorRagnarokEvent, we attended the official Thor Ragnarok Press Conference for the film, joined by Taika Waititi, starring Chris Hemsworth, Tom Hiddleston, Tessa Thompson, Cate Blanchett, Idris Elba and Jeff Goldblum among others discussing what it was like working on the film, what fans can expect, and a big bombshell announcement that has Marvel fans everywhere excited about the possibilities…

What makes this Thor different from the others?

CHRIS HEMSWORTH:  Taika Waititi, basically. I think we all had a vision, and an idea, and a want to do something vastly different than what we’d done before, and take it to a different place. And that meant kind of doing away with what we knew, and just reinventing it, and it all came from his crazy, wonderful brain, and his inspiration, and him pushing us every day on set, and constantly encouraging us to improvise, and explore, and take risks. And it was one of the most enjoyable experiences I’ve ever had on a set, and a film that I feel the most proud of, just because of this – this whole team, and the collaboration, and fun we had.

{Insert a myriad of “We love you Chris” screams from the audience.}

And Taika, you kind of brought an independent sensibility to this monstrous film, and gave it fun, and a little heart, too. What was the process like for you?

TAIKA WAITITI: Well, when they first asked me to come and to them about making this film, obviously I thought that Marvel had lost their minds, so they’re just hiring anyone now.

But I came in, and I guess I thought that – I knew my strengths were just like tone, character, and you know, relationships, and things, and I had to ignore the scale of this monster, this beast, you know it’s a huge, huge film. And what can be distracting on set is if you look over your shoulder, and you see 300 people standing there. So I just had to keep reminding myself what’s more important is what’s inside the rectangle, and usually, it’s two or three people trying to remember their lines.

And so it doesn’t matter the scale of the film – that’s always the same, you know. So – so, I just focused down on what I was used to, which was what’s in front of the camera.

People are invested in these franchises, and they love these characters. So what made Taika and everybody else here the right fit?

KEVIN FEIGE: Well, I mean, Chris sort of said it. We wanted a new sensibility. We wanted to take Thor – and if you look at everything Chris has done as this character, there have been moments of humor – moments of humor throughout. And we wanted to build on that. And if you look at the movie, it’s got the epic action. It’s got Thor arguably more powerful than he’s ever been in any of the films, with his powers going up against the Hulk, but at the same time embracing what Mr. Hemsworth does better than anyone up until now has ever been able to see, which is his acting chops expands to comedy in an amazing, in an amazing way. And Taika giving them the confidence to explore that, and to try things. And most of that is in the movie, because it was on story, and yet at the same time expanded each of their characters.

Next we enjoyed as each of the cast members commented on what a delight it had been for each of them. From the amazing chemistry between the cast to feeding off of Taika’s energy and vision for the film.

Jeff Goldblum shared what it was like for him coming into the Marvel Universe.

And then came the news the internet is buzzing about…

During our interview with Marvel President, Kevin Feige, he shared how he’d been approached by the entire group of Marvel actresses asking about the possibility of an all-female superhero movie. Kevin was not against it at all and, finally, at the Thor Ragnarok press conference, we got to hear him say, “YES!” Of course this isn’t an announcement of the when and wheres this is taking place, but meanwhile, fans can simply look forward to the masterpiece of girl power gold that’s been put out there into the universe! 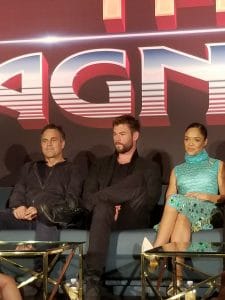 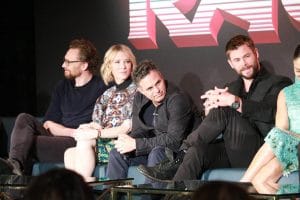 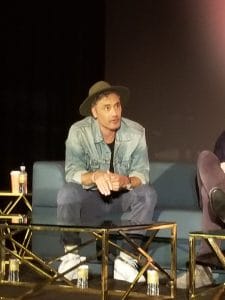 Thor: Ragnarok comes to theaters on Nov 3rd. Check out the Official Trailer below!

How The Story Behind Cars 3 Is Really All Of Our Stories #Cars3Event
5 Avengers: Infinity War memes that perfectly describe my first reaction to the film
5 things I can share from my "Top Secret" visit to the set of Captain Marvel
First Look at the upcoming Disney's Beauty and the Beast #BeOurGuest

« Switching from iPhone to Samsung? Here are 12 Samsung Galaxy S8 Phone Hacks You Should Know
Karl Urban on The Evolution of Skurge | Thor: Ragnarok »