We had a chance to see Disney’s Coco while in the theaters and I can’t even tell you how much we loved it. In all honesty, there was more going on in our lives at the time that I hadn’t shared with you guys. My 5 year old daughter had just lost a friend and former classmate– yes, you read that right. He was a 5 year boy we’d known since daycare and he was suddenly taken from us way too soon. My daughter had so many questions as she tried to cope with and understand what just happened and I felt like seeing the movie helped her find just a little bit a peace she needed at that time.

If you haven’t seen the movie yet, Coco is the story of a 12-year-old aspiring musician’s (Miguel played by Anthony Gonzalez) journey to the magical land of his ancestors. The timing of the film is centered around the holiday Dia de los Muertos, so Miguel’ s journey takes him into the world of the dead as tries to find and connect with his family’s heritage and story.

Coco has since gone on to win a 2018 Golden Globe Award for Best Animated Motion Picture, top the domestic box office Thanksgiving holiday weekend, and become the highest grossing film of all time in Mexico.

Now, I’m happy to share with you guys that Coco is also now available to have in your home on Movies Anywhere* and 4K Ultra HD,™ Blu-ray,™ DVD and On-Demand! 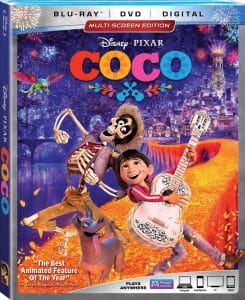 “Coco” is packaged several ways to ensure viewers get the most out of their in-home viewing experience. The Multi-screen Edition (formerly the Blu-ray Combo Pack) includes Blu-ray, DVD and a Digital copy, giving viewers the flexibility to watch the film on different devices. Those with 4K Ultra HD capability may opt for Digital 4K Ultra HD or the 4K UHD Combo Pack, which includes 4K UHD, Blu-ray and a Digital copy. 4K Ultra HD provides four times the resolution of HD, bringing the rich color, textures and sounds to life and immersing viewers in two fantastically animated worlds. Dolby Atmos audio heightens the memorable score created by Oscar®-winning composer Michael Giacchino and his 83-piece orchestra, as well as original songs like “Remember Me” by the Oscar®-winning team behind “Frozen,” Kristen Anderson-Lopez and Robert Lopez.

Here are some of the cool Coco bonus features you can expect:

• Deleted Scenes with Introductions – Director Lee Unkrich and co-director Adrian Molina talk about the deleted scenes and the part they played in the development of “Coco.”
o Día de los Muertos – In this musical extravaganza, the colors and excitement of Día de los Muertos come to life as we meet superstar Ernesto de la Cruz.
o The Way of the Riveras – A musical number in which Abuelita and Miguel prepare their Día de los Muertos celebration while she teaches him Rivera family history and traditions.
o Celebrity Tour – Héctor, a Land of the Dead tour bus guide, agrees to help Miguel, revealed to be a living boy, on his quest to find de la Cruz.
o The Bus Escape – The Rivera family catches up to Miguel and Héctor and attempts to halt their mission to find de la Cruz.
o Alebrije Attack – Miguel and Héctor are interrupted on their journey to find de la Cruz by a fierce alebrije.
o The Family Fix – After de la Cruz reveals his true colors, the Rivera family puts their dismay aside and comes together to repair the smashed guitar needed to send Miguel home.
o To the Bridge – As the Land of the Dead counts down to the end of Día de los Muertos, Miguel and de la Cruz come head-to-head on the marigold bridge.
• Filmmaker Commentary – Presented by Lee Unkrich (director), Adrian Molina (co-director) and Darla K. Anderson (producer).
• The Music of “Coco” – Collaborating with musicians of Mexico and some unique instrumentation, this documentary explores the beautiful fusion of music essential to the story of “Coco.”
• Paths to Pixar: “Coco” – Explore how the film crew’s personal stories resonate with the themes of the movie itself.
• Welcome to the Fiesta – A musical exploration of the skeletons that make the Land of the Dead in “Coco” so wondrous and intriguing.
• How to Draw a Skeleton – Pixar artist Daniel Arriaga gives a lesson on the quick and easy way to draw skeletons using simple shapes.
• A Thousand Pictures a Day – Join the “Coco” crew on an immersive travelogue through Mexico, visiting families, artisans, cemeteries, and small villages during the Día de los Muertos holiday.
• Mi Familia – Developing the Riveras was a labor of love that took the cast and crew on a deep dive into the meaning of family.
• Land of Our Ancestors – Watch Pixar artists lovingly construct layer upon layer of architecture from many eras of Mexican history, bringing the Land of the Dead to life.
• Fashion Through the Ages – The cast of characters in “Coco” are from many different eras, making for some magnificent costuming opportunities.
• The Real Guitar – The majestic guitar that spurs Miguel on his journey through the Land of the Dead is a unique creation. Watch as it is initially designed by a Pixar artist and ultimately realized as a real instrument by a master luthier in this poetic ode to craftsmanship.
• Dante – How the crew fell in love with the uniquely Mexican breed of Xoloitzcuintli (or “Xolo”) dogs that inspired Dante.
• How to Make Papel Picado – Join Pixar artist Ana Ramírez González as we learn how papel picado is made traditionally, and then try your own approach to this beautiful art form.
• Un Poco “Coco” – A montage of original animated pieces used to promote “Coco.”
• “Coco Trailers” – Trailers include “Feeling,” “Dante’s Lunch,” “Destiny,” “Journey” and “Belong.”

To get you ready to enjoy this film at home, also be sure to check these out!

11 Things to Watch for in Disney•Pixar’s “Coco”

Review: The Illusionists - Live From Broadway
FREE Printable Toy Story 4 Coloring Pages, Activity Sheets, & Recipes
Meet the Characters in Disneynature's Born In China
On location with the cast of ABC’s The Rookie