This post is a little bit off topic, but I just had to share. As some of you may know, I am (among so many other things) a Chiropractor’s wife (aka Chiro-wife). It seems as though that would never be a big deal, just as the wife of any other professional, but the differences tend to become apparent in certain situations each and every time. 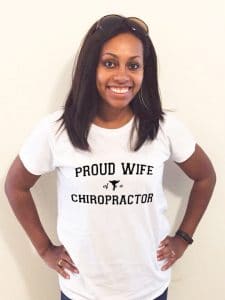 It’s always a blast meeting and chatting with other Chiro-wives because a lot of us tend to have really similar experiences and it kinda feels like we are in a league of our own.  I wonder sometimes if we could even have our own reality show….Ok, so we’re not as hot tempered as Basketball Wives, not as gangster as Mob Wives, not nearly as complicated as Sister Wives, and thank goodness, not as dramatic as the Real Housewives of {insert city here}…you get the point.  Nonetheless, we do have our own sense of community and likeness, which I definitely do appreciate. So I said all of this to say that just about every time my husband and I are introduced to a new group of people and the topic of him being a Chiropractor comes up, it’s always the same experience. This past weekend was no different.

The topic comes up and it’s like a room full of characters all of sudden – the supporter, the skeptic, the naysayer, the deal seeker (sometimes known as the guy that thinks my husband is going to drop his beer to give him an adjustment on the spot), and so on.  I guess he gets pretty excited about the dialog, though, because he lives and breathes the topic of Chiropractic. I wouldn’t say it bothers me as much as just purely fascinates me the assumptions, questions, and myths people have about the Chiropractic profession and lifestyle. So, if you’re ever in the company of another Chiro-wife, here are some of the biggest myths I am going to dispel once and for all:

1. We are always up for a Chiropractic debate.

I mean, clearly, we support our husbands’ professions. That’s kind of a requirement. No, we don’t think that every Chiropractor is the best out there, but the last thing we want to have to defend is the “quack who had your back hurting for weeks.” I love a good debate just as much as the next girl, but it puts a damper on any festivity when we have to discuss your negative thoughts and opinions of the Chiropractic practice.

2. We get unlimited back “massages” from our husbands.It’s always amazing to me how many times I’ve had someone say to me, “I’m sure you get massages from your husband all of the time.” Unfortunately for me, massage therapy was not necessary the focal point of his training, so I am just like any other wife who literally has to beg for a back massage or foot rub. 🙁  I can occasionally score an “adjustment” from my husband, but even that’s not the easiest thing to do after he returns from a very exhausting and physical day at work. 3. We are rich. This one gets a big, fat, “I WISH!” Now, I do believe (well, hope) that Chiropractic can be a very lucrative career, but it does take a lot of time. My hubby has only been practicing for a few years and I don’t think I’ve met another Chiro-wife whose husband has been in practice for less than 5 or 10 years who I would classify as “rich.” I mean, it takes at least a couple of years for new Chiropractors to build a decent clientele, unless work somewhere they earn a salary.  Even then, a decent salary -starting out- would likely still be just enough to cover student loans. Either way, it takes time. Ask me again if we are rich in a couple of years and hopefully, my answer will be different. 4. All Chiropractic kids are home-birthed, un-medicated, and un-vaccinated.This is a BIG topic of discussion pretty often – what do we do with our kids? I understand where this question comes from and it’s pretty valid. I’ve met other Chiro-wives who have home-birthed their kids and others (like me) who would not even try it.

What I can say that we all encourage minimal use of drugs/medication and medical intervention wherever possible. I can honestly tell you that there have been many times I’ve wanted to just give my daughters meds when they’ve been sick, but my husband has refused it and I’ve {verrrry reluctantly} complied. He has been trained to heal even our children without medication, so we’ve rarely given them anything.  True story, when our youngest had started day care, our kids had gotten the sickest they’d ever been. I went out and bought a bunch of over the counter stuff and my husband would not let me use them.  I could’ve killed him!  However, while it seemed to take a little longer for them to get better, they’ve rarely gotten sick at all since then.  All of the stuff going around the daycare seemed to miss them somehow and I was happy! Plus, in the process of all of that, I’ve discovered some really good drug-free ways to fight a cold.

As for the vaccination thing…Well, you can see for yourself.  My stance may surprise you…

5. We would have it any other way. I’ve had lots of friends and family ask me if I wished my husband were a “real doctor.” Once I correct them to say, “medical doctor,” my answer is undoubtedly “NO.” Through his profession, I’ve seen that he is not only subscribed to a job or a career, he is subscribed to a faith, a belief, a philosophy, a lifestyle, and a Godly ordained science that actually heals people. He makes this clear as day throughout every debate or discussion he is a part of (even at Christmas parties) and I love it. So, despite all of the trials and tribulations that come with this or any other profession, I do believe that our lives are better for his and we wouldn’t have it any other way. 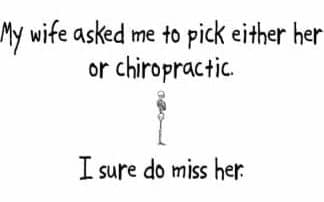 I’m ALWAYS excited to meet another Chiro wife!  If you are one, please leave a comment on this post and we can stay in touch!

Wordless Wednesday: Talk about a One Stop Shop
Benefits of Infant Chiropractic: Is Chiropractic Care Safe for Babies and Infants?
What's in a middle name?
Do's and Don'ts During Mercury Retrograde