One question I actually get approached with quite often is on the subject of infant chiropractic and specifically, “Is Chiropractic care safe for babies and infants?” I would say that it’s probably not a Chiro-wife myth that we allow our babies to have chiropractic adjustments. We have some pretty firm beliefs on the topic and ultimate faith in its benefits. While I’m not out to convince every mom to seek chiropractic care for their babies, I would just like to share with you some of what I’ve learned and experienced regarding infant chiropractic. 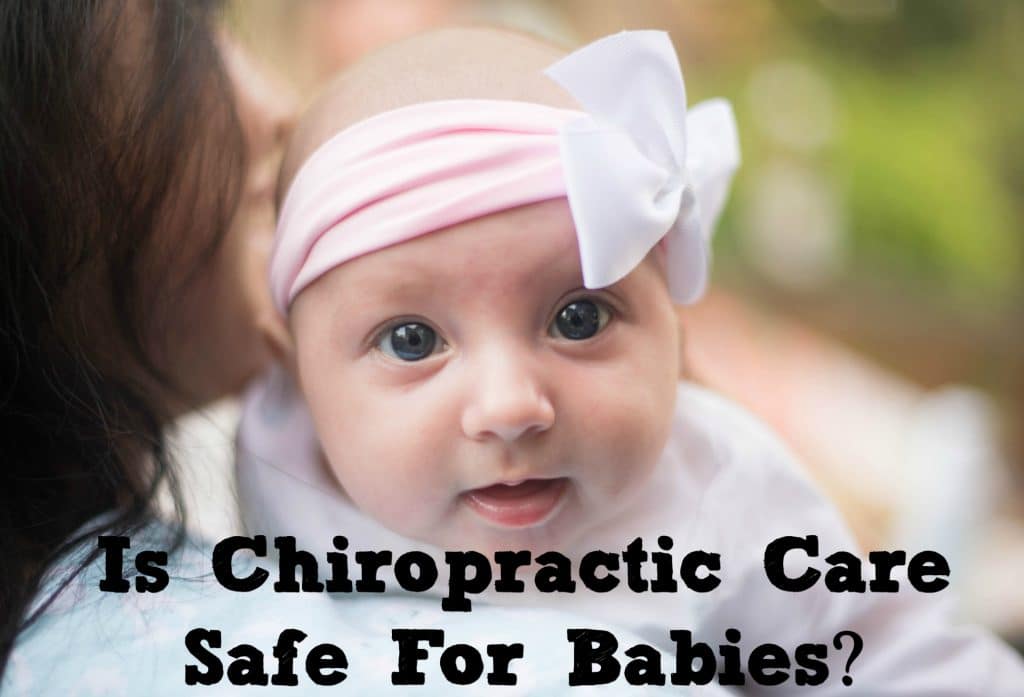 Is Chiropractic Safe for Babies and infants?

It may sound pretty unsafe the thought of subjecting an apparent fragile baby to the same “cracks” and pressures we adults experience during a chiropractic adjustment. But rest assured, it’s definitely not the same!

What Happens during an Infant Chiropractic Adjustment?

Of course, I’m not the Chiropractor in the family, but I have seen my hubby adjust our babies numerous times and I can assure you that it’s a very different and much gentler chiropractic techniques that’s employed on babies. No placing on a table, asking them to take a deep breath and thrusting down on their back. Rather, he holds them, places his fingers on certain parts of their spines, and does his magic with no more pressure than if he were checking a peach for ripeness. The entire process will usually go completely unnoticed by babies.

Definitely safe for babies and no trauma at all.

Giving birth is tough, granted. Being born, though, can be just as tough and traumatizing. When you think about their journey through your canal–squeezing their bodies through a tiny passage, combined with any pulling and additional force from the Doctor or Midwife—it should be no surprise that about 9 out of 10 newborn babies go through some sort of trauma during natural birth. There is certainly a lot of pressure being exerted on the head and neck (and the rest of the body) during birth.

If this kind of birth trauma is not taken care of, a baby could potentially face issues with the growth of his/her spine, as well as his/her general development. Also, babies’ spines grow by about 50% by the time they reach a year old. This rate of growth obviously does not happen at any other point in his/her life and that is why it is so important to ensure the spine is aligned properly this early in your baby’s life. A poorly aligned spine could have an adverse effect on his/her nervous system and may result in many health complications throughout the child’s life.

Now that’s definitely not to say that any child who hasn’t had a chiropractic adjustment is subject to health problems, but there are other benefits of chiropractic care for children I’ll get into next. 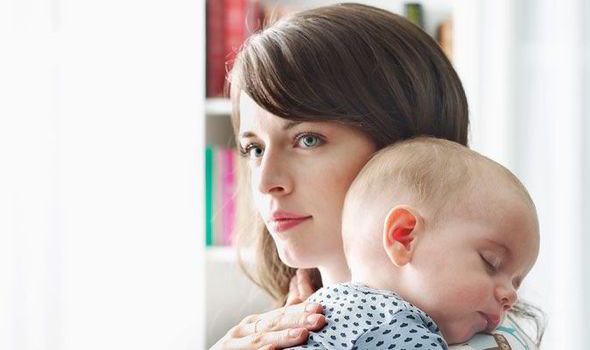 One of the biggest benefits of chiropractic care for babies (and really, adults too) is a much stronger immune system. I can personally attest to this…

My oldest daughter had regular chiropractic adjustments since birth and started daycare at about a year old. While we fully expected a wave of illness to overcome her, that never happened. Sans the standard cold and runny nose, she was always a really healthy baby.

I had a slightly different experience with my youngest. She was born a little early and for a variety of reasons, she did not begin chiropractic care right away. She was placed in daycare at only 8 weeks old because I had to return to work and for a period of time, it was pretty rough. At that point, I had 2 kids in daycare constantly spreading germs to each other – and then to us – then back to each other again – for about 6 months straight. My husband finally started adjusting my youngest for a period of time before we finally started to feel as though her immune system was strengthening. Fortunately, despite the constant runny noses in my home, we were able to completely avoid any of the major illnesses that were spread to other children in the daycare and since that period, they’ve both been pretty healthy.

Regular chiropractic care has also been known to help ease the following in babies:

Again, my intention is not to send all parents off to the Chiropractor with their babies, but since I’ve seen so many blogs and forums that speak against infant chiropractic, I had to present a different perspective.  As with any health-related issues, I’ll always recommend speaking to a Pediatric Chiropractor more about the topic before making your final decision.

**If you enjoy this article, also see Benefits of Chiropractic During Pregnancy**

« Should you actually teach your kids to break the rules – Yes or no?
What is Birthday Week? »